A new plan to clear our sidewalks, changes to E Line stations in Linden Hills, Rock the Garden lineup today 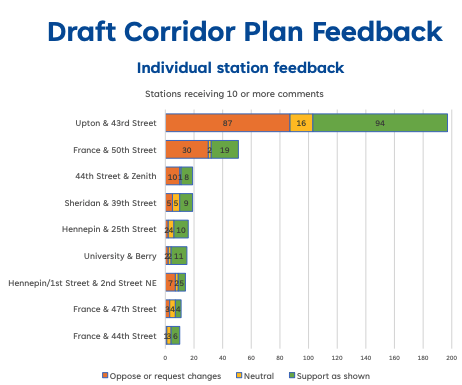 The city already plows our streets. Why not our sidewalks?
Melody talked with the folks organizing the campaign to launch a municipal shoveling program. What would that mean? Read on to find out.

The Met Council met yesterday to address changes to the E Line, the new bus rapid transit route that will run through Southwest, into downtown, and across the river. Henry Pan live tweeted the meeting if you want more details.

Here's a presentation with the changes. The station that got far and away the most comments (scroll down to see how wide the gap was) was the 43rd & Upton stop at the edge of the main Linden Hills business district, with a narrow plurality of the comments in favor of keeping the original plan as-is. Here's a letter we published written on behalf of a bunch of Linden Hills businesses laying out their objections to the initial 43rd & Upton design a couple months ago.

They announced a couple changes to the portion of the route that runs through Southwest: "Upton & 43rd Street: Shift southbound platform to northwest corner of intersection" (here's an image of the proposed station and the change) and "44th Street & Zenith: Shift station to Abbott Avenue" along with a promise of additional review for platform alternatives at 47th & France and 50th & France.

Next up will be one month of public comment, from March 9 - April 8. We'll keep you posted on how you can chime in. The final corridor plan will arrive in May 2022.

The lineup for Rock The Garden, which is back at the lawn next to the Walker this year, will be released today at 9 a.m. Listen to a stream of The Current where it'll be announced live. Tickets go on sale for Walker and MPR members on Thursday, March 3, and to the general public on Monday, March 7.

Hennepin County Commissioner Marion Greene shares an overview of the County's work in 2021 and what lies ahead in 2022. (Marion Greene)

A group of organizations are working together to expand mental health offerings for public safety professionals suffering from PTSD. (League of Minnesota Cities)

Allied Emergency Vet Services, a new 24-hour clinic for pet emergencies, opened last week at 58th and Nicollet. You can call 24 hours a day, so save their number in your phone: 952-521-3030. (Facebook)

The City of Minneapolis posted a video about the "Reimagining Public Safety" campaign, led by the city's Department of Performance and Innovation.(Instagram)

You can order a cool print of Hennepin Ave from 1908 for free! (City Merch)

The Hennepin County Board meets this afternoon. On the agenda: Authorizing $5 million in federal funds to fight gun violence, a small budget boost to the County's Violent Offender Task Force, a contract with Bolton & Menk for the redesign of Franklin Ave, and additional funding for the Public Health Clinic partly targeted to "better reach populations living within homeless encampments and unsheltered homeless populations."

Did you know there is a Minneapolis Solid Waste, Recycling and Organics Facebook group? People post items around their house and group members try to figure out how to dispose of it.

The Linden Hills Neighborhood Council has its monthly board meeting tonight at 7 p.m.

There's about a month left to see this Virgil Ortiz exhibit at Mia. "Ortiz creates mythical superheroes living in the year 2180 from video, hand-coiled ceramics, lithographs, and photography... These characters are inspired by the largest uprising in North American history: in 1680, Pueblo communities banded together to defeat a brutal colonial Spanish regime in the Southwest."

Planning a wedding soon? Check out this free seminar on handling the process happening at Harriet Place at 46th & Bryant tonight.