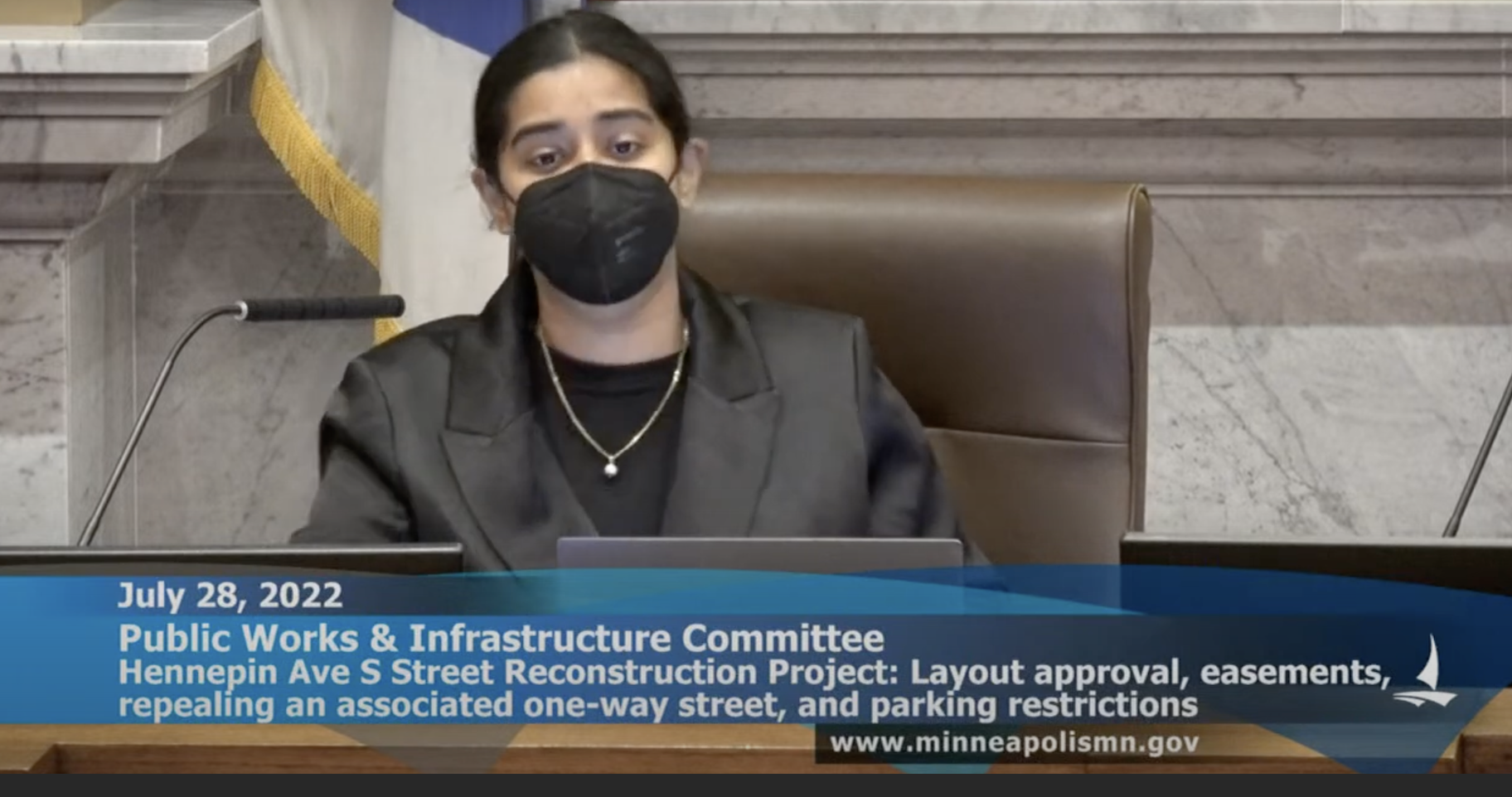 The Public Works and Infrastructure Committee passed a resolution today that will allow the Hennepin Avenue redesign plan to move forward with “daytime” dedicated bus lanes. A prior version of the plan included 24/7 bus lanes–that plan was passed by City Council on June 16 and then vetoed by Mayor Jacob Frey on June 17.

Today the committee voted 5-1 in support of the redesign resolution. The resolution moves to the full City Council for a vote during its next meeting on Aug. 4.

The “daytime” bus lanes would operate for a minimum of six hours per day in each direction. The six hours of transit-priority would operate once the redesign construction is completed in 2024. The resolution does not specify what times the daytime bus lanes will operate.

The Hennepin Avenue South redesign plan and the mayor’s veto of the plan have sparked community organizing efforts, including a protest down Hennepin in support of 24/7 bus lanes. Businesses on Hennepin have been overwhelmingly in opposition to the 24/7 bus lanes, citing concern over losing customers with less parking available in the future. The owner of Cafe Meow was an early and vocal opponent of the bus lanes.

The resolution that passed today does include a path to establishing 24/7 bus lanes utilizing “data analysis, metrics, and service availability agreed upon by the City and Metro Transit.”

The resolution states that 24/7 bus lanes would not be feasible until two years after the construction is complete to allow for transit data collection and analysis.

“This is not what we wanted but these are meaningful commitments,” Ward 10 Councilmember Aisha Chughtai said before the passage of the resolution. She, along with Ward 12 Councilmember, and the committee’s chair, Andrew Johnson, worked with the mayor’s office to come to this compromise.

“It’s a compromise, and often time compromise means that everyone does not get everything they want,” Johnson said. “It’s the next best thing that we can all agree on that we can get moved through this council as well.”

Numerous committee members acknowledged Chughtai’s advocacy and labor in fighting for 24/7 bus lanes to be included in the redesign’s final plan.

“Her dedication has been unwavering,” Ward 11 Councilmember Emily Koski said of Chughtai’s work towards a compromise.

Chughtai’s ward runs along Hennepin Avenue South and her office has been receiving feedback about the plan since she was elected.

“From the very beginning, I’ve championed, and exhausted every legislative and strategic tool, in service of 24/7 bus lanes,” Chughtai said.