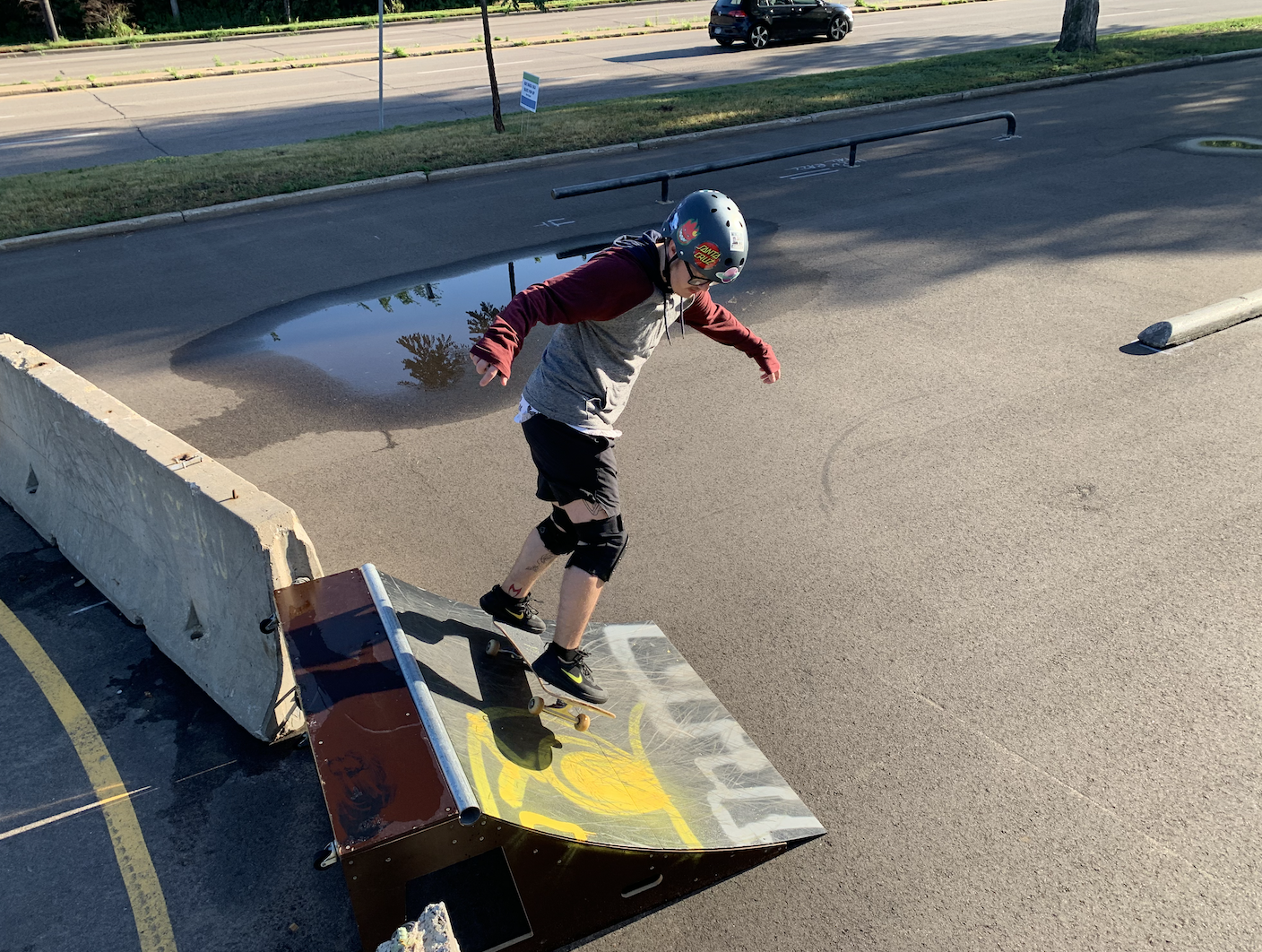 This summer a small skate park popped up in a parking lot north of Bde Maka Ska. You could easily miss it, even with the nearby small yard sign that reads, “Bde Maka Ska Skate Pop-Up, Now Open.”

But if you’re in the local skateboarding community, you know exactly where it is, and probably know someone who helped build it.

The Minneapolis Park and Recreation Board collaborated with City of Skate, a non-profit organization, to move a skate park that appeared after a fire burned down the pavilion building at Bde Maka Ska in 2019.

During the spring and summer of 2021, a DIY skatepark was removed from the park’s former pavilion space due to the Park Board’s concern over liability.

In 2020, “a citizen put one obstacle out there,” Scott Oreschnic, owner of the skateboard shop Cal Surf, said. “Last spring, people started adding to the area.” Cal Surf is two short blocks from the pavilion area.

By the summer of 2021, the DIY skate park was established, full of “homemade obstacles,” as Ethan Felder put it. Felder is an employee at Cal Surf and was involved in trying to get the original park back.

“Unofficially we would take care of stuff for safety,” Oreschnic said about his Cal Surf team. Oreschnic is also on the board of City of Skate.

The Park Board wasn’t keen on the DIY skatepark for liability reasons, according to Oreschnic. The board reached out to him and asked him to remove the skateboard obstacles (e.g. rails, ramps). The Park Board could be held liable for injuries sustained on their property.

When the DIY park came down, a skateboarder, whom Oreschnic referred to as “a kid,” started a petition and in two days got 1,5000 signatures asking to re-establish the park. The kid showed it to the Park Board.

The board responded and said they’d be happy to re-establish a skate park but it would have to be an official Park Board project.

That’s where City of Skate stepped in.

City of Skate has helped the city establish other sanctioned skate areas, such as Elliot Skate Plaza.

According to Oreschnic, some Park Board members were ready to set something up two weeks after the DIY park came down, but there was a long delay. Bureaucracy.

City of Skate originally offered to build the skate park but the Park Board told them: if you build it, you insure it. Without massive financing to insure a park, City of Skate gave the project over to the Park Board but continued to collaborate with them on design elements.

The park was built with repurposed items from the parks system. Rails in the pop-park park come from Painters Park. Old picnic tables were used on other obstacles.

On the day the obstacles were installed, skateboarders showed up to guide the installation and prep the park.

Felder was there that day.

“The city gave us rub bricks,” Feldman said, as he showed me the worn down apparatuses, which are typically used to buff out “blemishes” on concrete. Skateboarders use rub bricks to completely smooth out concrete curbs.

The Park Board also made a specific mold for the skateboard-friendly concrete barriers at the end of the park.

The park was supposed to take up a full lot on the north end of Bde Maka Ska but got cut down to a turn-around area without taking away any parking spaces.

Wind surfers complained that they wouldn’t be able to find parking if the Park Board removed access to one of the three lots. The surfers presented a petition with 40 signatures to the Park Board which was enough to shrink the pop-up skate park. The skateboarders were annoyed. Most of them walk, bus, bike, or skate to the skate park and don’t need parking to enjoy their activity.

Despite the smaller size, Feldman expressed a lot of excitement over the park. He goes there every day, a short bike ride from where he lives in South Uptown.