Don't get numb to this 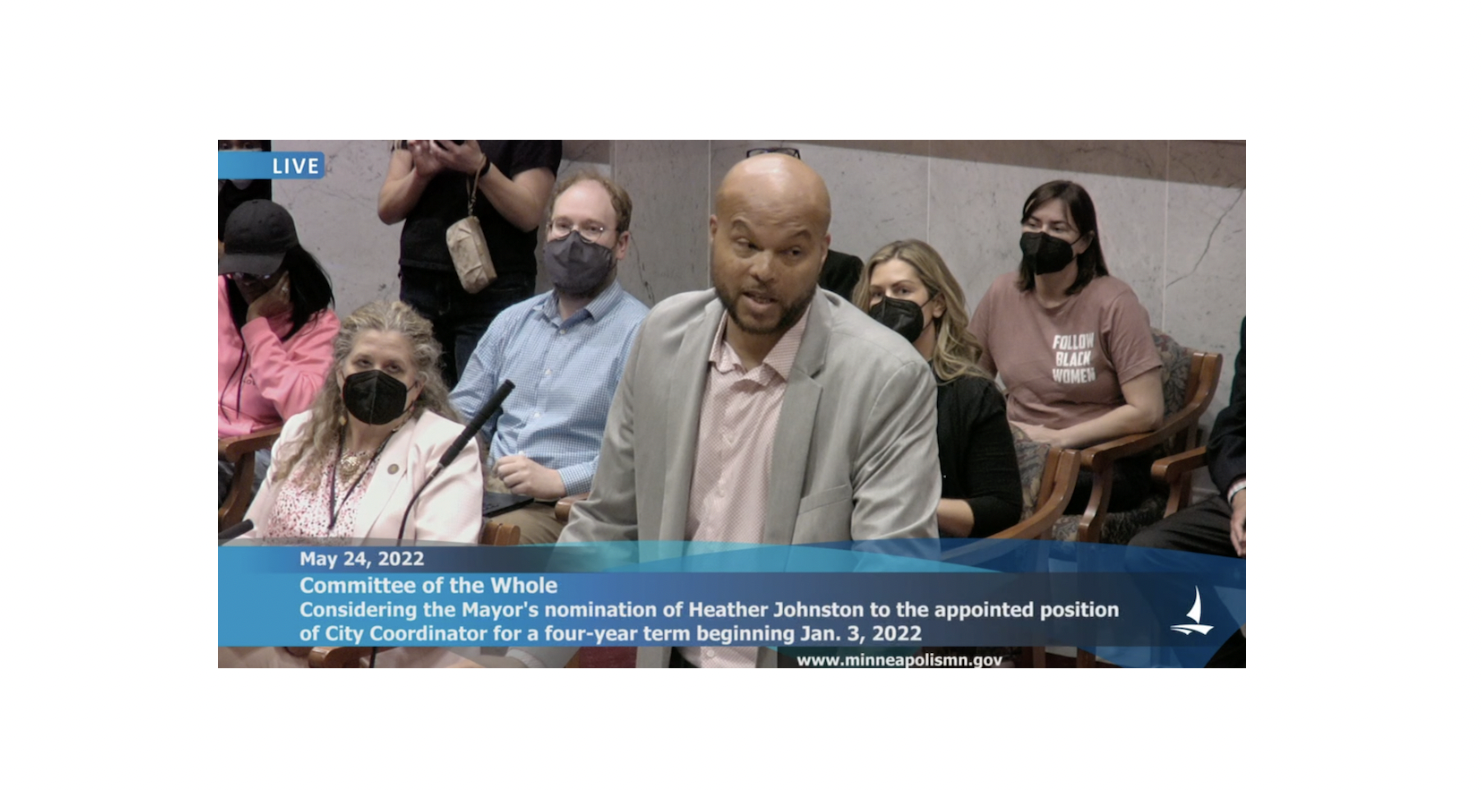 During the May 24 City of Minneapolis Committee of the Whole meeting, Office of Performance and Innovation Director Brian Smith recounts his experience working with Interim City Coordinator Heather Johnston who sits to his right.

Today is the second anniversary of the murder of George Floyd. Yesterday, 19 children and 2 adults were killed in a school shooting in Uvalde, Texas. Earlier this month, ten Black people were killed by a white supremacist in Buffalo, New York.

The city’s Committee of the Whole met May 24 to consider Mayor Jacob Frey’s nomination of Heather Johnston to fill a four-year term as city coordinator. Frey nominated Johnston as interim city coordinator after Mark Ruff left the position in August 2021.

We will have more coverage of the public hearing up later today.

During the presentation, Fearing said the proficiency gaps between demographic groups and the overall low rates of proficiency are unacceptable. Rollinger also presented information on the Groves literacy program and two principals discussed their experience with the curriculum. You can read more about the meeting via Melissa's Twitter thread.

As Melissa reporter earlier this month, the Minneapolis Public Schools teachers and ESP unions held leadership elections. The members of the Minneapolis Federation of Teachers and Education Support Professionals Local 59 re-elected Greta Callahan as president of the teachers chapter. The ESP chapter president Shaun Laden did not run for re-election. Catina Neal Taylor, who is currently the second vice president of the ESP union, ran unopposed for chapter president.

Callahan has faced criticism from union members about how union leadership handled communication about the bargaining priorities for Black educators.

Yesterday, NBA Coach Steve Kerr used his time with the press to talk about the mass shootings in Ulvade, Texas and Buffalo, New York. He made an impassioned plea to Congress to back the Bipartisan Background Checks Act, or H.R. 8.  (Twitter)

Today President Joe Biden is slated to issue an executive order aimed at reforming federal policing on the two-year anniversary of the death of George Floyd." (New York Times)

The New York Times published a piece about the "slow change" seen with the Minneapolis Police Department. (New York Times)

The Minneapolis Public Schools educators who filed a grievance against their union leadership has received the union's official response. (Twitter)

Racket wrote about the metal houses from the post-World War II, G.I. Bill housing era at 50th and Nicollet (Racket)

‍Minneapolis Documenters is holding a two-day training starting tonight. There is another one schedule for June 1 and 2. You can get paid for covering public meetings.

Head over to Powderhorn Park tonight and a get a free glove and ball for a child in your life.

There is an online fundraiser happening to fund the Kingfield Porch Festival this summer.

This may be a good palette cleaner. It's an open musical love letter to the variety shows of the 1960s and 70s: Vic Volare's Anyswingoes Wednesday Wingdinger Party at the Driftwood Char Bar tonight.

The Desire Store plays tonight at the Granada Theater.