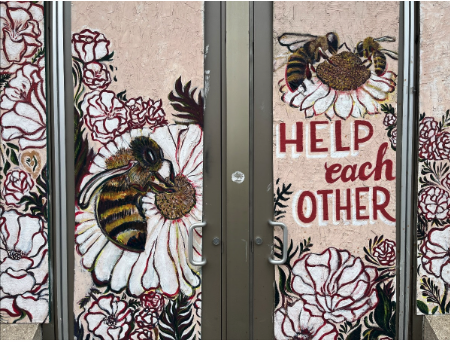 A mural reading "Help each other" on the former Victoria's Secret doorway on Hennepin Ave. South and Lake Street.

I broke out the glitter yesterday to celebrate us getting to 50% of our membership/donation drive goal. If I haven't impressed you with our totally DIY drive tracker, here's the latest artistic update.

My new goal is to fill up the tracker's second column by this weekend. We have met every goal of our drive thus far and I know when can keep that up.

Can I tell you something? Your donations this month have really energized us. It's a sign that we are producing news that you value and it has settled our anxieties over funding our writers. I am able to assign more stories to our crew because of your financial support. No fancy dinners, large office buildings, or private planes. Your money goes right to the people who cover the news.

‍Melissa Whitler writes articles about the complexities of the Minneapolis Public Schools' finances. The knowledge she brings to the community is unparalleled. I can't even tell you how many hours Melissa has spent attending meetings, watching past meetings, and pouring over spreadsheets to make sure district families can keep tabs on what's happening at their schools. When you donate, that money funds her work.

‍Become a member or donate today.

Speaking of Melissa, she wrote an article this week about next year's MPS budget, which shows that declining enrollment, new educator labor contracts, and a lack of state assistance is creating a major financial crisis for the district.

‍Last night, the school board approved the district's budget for the 2022-23 school year. School Board member Ira Jourdain made a motion to amend the budget by using $10 million from the unassigned fund balance and distribute it evenly across schools. After a lengthy discussion, the amendment failed to gain enough votes by the school board. The board also approved the capital plan and the long term facilities maintenance plan. This was the last board meeting for the school year. Melissa live tweeted the meeting. Her summary article of the meeting will be up later this week.

The City Council meeting scheduled for tomorrow at 9:30 a.m. is going to be jam packed.  There is still no posted agenda. We know that the City Council will vote on whether to confirm Interim City Coordinator Heather Johnston to a permanent position. This is significant because both past and current city workers testified in front of the the council's Committee of the Whole asking them not to approve Johnston.

We also know the council will vote on whether to approve the Hennepin Avenue South redesign project. In committee last week, an amendment to restrict parking in the Hennepin Avenue bus lanes passed. The amendment was brought forth by Ward 10 Councilmember Aisha Chughtai. “Bus Lane (no parking)” is now a part of the language of the proposed layout. This is significant because Public Works Director Margaret Anderson Kelliher had proposed to change the design to phase in the 24/7 bus lanes by allowing parking for an unspecified amount of time.

A week ago, we told you about the delivery-only Top Crow Bakery. This week we are happy to tell you their delivery zone expanded east to Lyndale Avenue South. (Top Crow)

Mayor Jacob Frey announced a new discipline matrix for Minneapolis police officers. Officers are now to be terminated if they, for example, use force that is "unnecessary or not objectively reasonable, and is likely to cause serious bodily injury or death", fail to report a use of force violation, use discriminatory language, or fail to notify a supervisor when deadly force was used. (Star Tribune)

Watch out for toxic algae blooms in Minnesota lakes and streams. (Axios/KARE 11)

The Park Board meets tonight at 5 p.m. (agenda here). They'll be discussing the open parkways program, getting an update on the climate resiliency program, and more.

If you or anyone you know are getting behind on house payments due to the pandemic, check out state-run HomeHelpMN. The service can help connect people with resources and give financial support.

The Met Council Transportation Advisory Board meets today at 12:30.

Kristoff The Magician is performing at Granada Theater tonight with a "a warm and fun, speakeasy vibe."