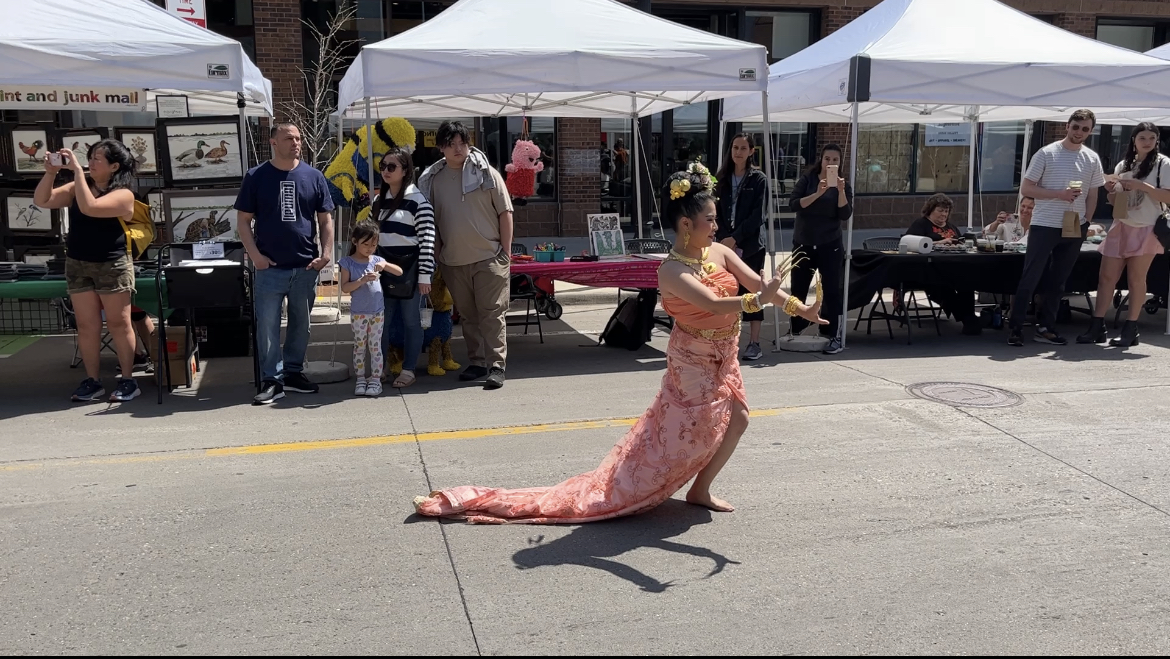 A performer slowly dances down Hennepin Avenue South on May 7 during the Spring into Uptown Block Party.

Hello, neighbors. On Saturday evening, I sat outside on Lyndale Avenue S. with some friends and family. We were enjoying beers and pizzas on a sidewalk patio but I was distracted by the new median that went in at 27th Street. I watched in delight as pedestrians crossed the street, emboldened by flashing pedestrian lights and the drivers who stopped for them at the crosswalk. I found myself cheering and clapping every time a safe pedestrian crossing happened. Hey, a little positive reinforcement never hurt anyone.

I also noticed something that John Edwards of Wedge LIVE! mentioned awhile back that I honestly didn't believe. Medians can help with noise dampening. I don't know the science behind it, but sure as heck, I was able to converse with my companions at a lower volume than ever before on Lyndale.

This project has been a long-time coming. I encourage you to experience Lyndale Avenue at 25th and 27th Streets as a pedestrian and bask in the fleeting moments where you can feel relatively safe and protected crossing Lyndale Avenue South.

Minneapolis City Council and committees
The City's  Policy & Government Oversight Committee, or POGO, meets at 1:30 p.m. Agenda items of note include a few consent items, which means they are to be voted on without much discussion. On the docket are $555,000 worth of MPD-related workers' compensation claims. MPD officer Hein Dinh has a $165,000 workers' compensation claim. Dinh was also a defendant in a failed civil rights action suit after shooting and killing Abu Kassim Jeilani in 2002. Officer Grant Johnson has a $160,000 workers' comp claim. In 2011, he told the Star Tribune, "he sometimes feels like he spends the better part of the night macing rowdy bar-goers just to keep the peace."

Also on the agenda is a $65,000 settlement with Sharon Moara, who was 17 in 2020 when police fired projectiles into a crowd during the protests after George Floyd's and hit her in the face.
-
The City's Planning Commission is meeting at 4:30 p.m. The agenda includes a public hearing to approve the site plan review for France Ave Apartments on the 5200 block of France Avenue S.
-
Tomorrow, the City Council's Committee of the Whole meets at 1:30 p.m. This is a discussion-oriented committee. This week, they will hear reports from the following committees: Budget, Business, Inspections, Housing & Zoning, the aforementioned POGO, Public Health & Safety, and Public Works & Infrastructure. Committee of the Whole meetings give the City Council a chance to review committee reports before any related action items are addressed at the full council meetings.

MPS School Board
At 5:30 p.m. tomorrow, the MPS school board will vote on approving a contract for the interim superintendent candidate, Rochelle Cox. Cox will replace Superintendent Ed Graff when his contract expires at the end of June. The board will also appoint a temporary at-large director to replace Josh Pauly, who resigned during the MFT 59 educators strike.

The posted agenda also includes a presentation on the 2022-2023 budget. If you have been curious about MPS finances, be sure to look through the already-published presentation.
-
All Minneapolis Public Schools Board of Education meetings are held at the John B. Davis Education Service Center at 1250 W. Broadway Ave. You can watch livestreamed meetings in real time or recordings of livestreamed meetings.

-
Meetings are broadcast live and held in-person at Mary Merrill Minneapolis Park and Recreation Board Headquarters-
Hennepin County meetings can be watched live via Microsoft Teams and meetings recordings are also made available.

Met Council (Metro Transit, Metro Mobility)
All major Met Council meetings for this week have been cancelled. Why? We will let you know.
-
Agenda links include a YouTube video that goes live for each meeting.

It's Black Fashion Week. The kickoff event this year is at Paisley Park with the "Design of the Times" fashion show. (Axios)

Look at all the wildlife that walk around when humans aren't present. (Voyagers Wolf Project)

Here's some local music trivia for you. Cornbread Harris's son is Jimmy Jam. The two recently reconciled after four decades of being estranged, thanks in part to local music journalist Andrea Swensson. (Star Tribune)

The Strib reports that 25 people are vying for the MPD Board of Education at-large seat, which opened up when Josh Pauly resigned during the MFT 59 educators strike. (Star Tribune)

Support Fair School for the Arts students by visiting "High Style - A Student Skateboard Art Exhibition," open at The Gallery in The Chambers Hotel.

If you are connected to any student-related projects, please let us know so we can highlight them here.

LA Buckner is back at Icehouse for another night of jazz, Gospel, hip hop and avant-funk.