District budget approved and the last meeting for Supt. Graff 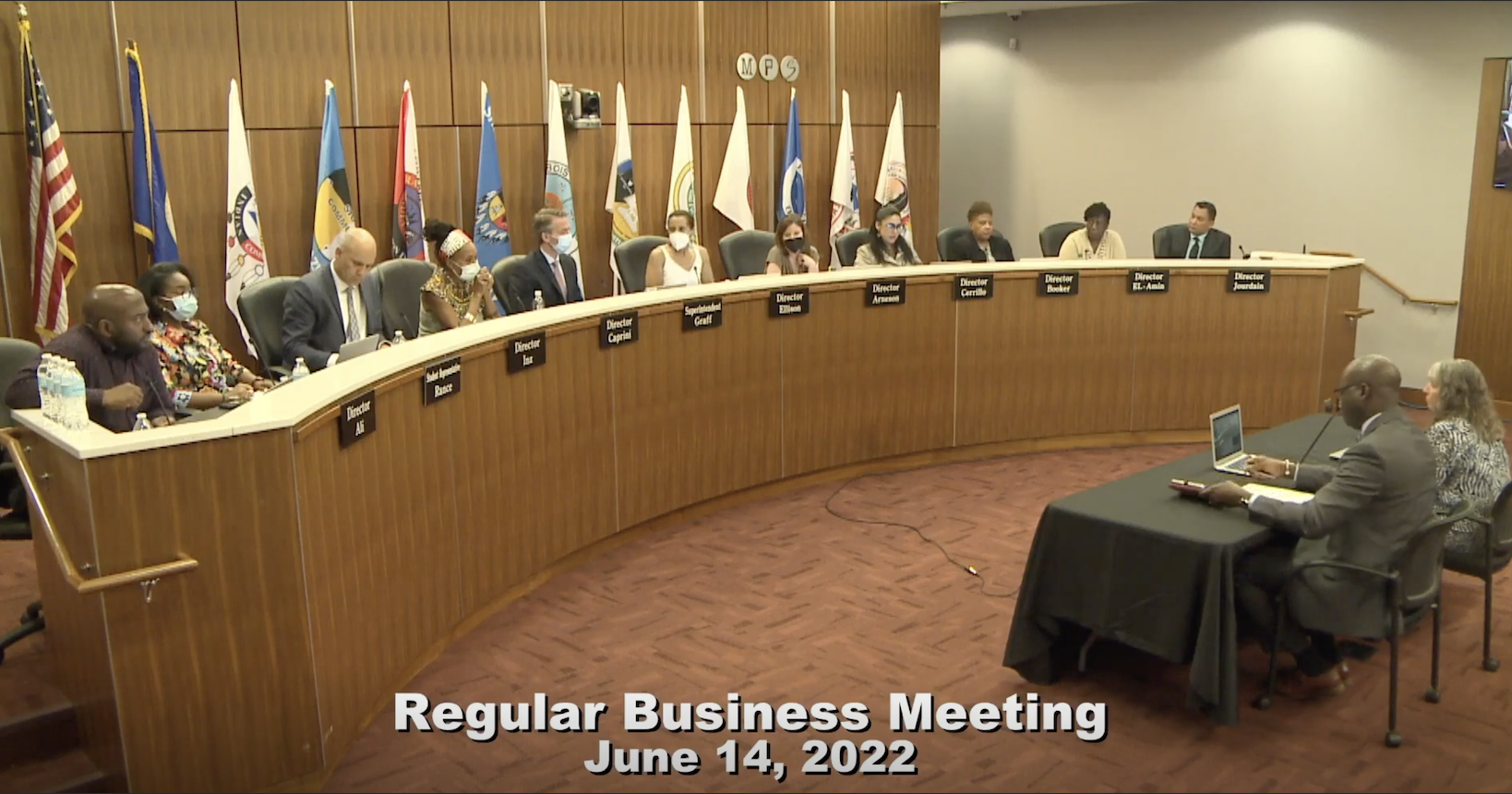 The Minneapolis Public Schools Board of Education holds its last meeting of the school year the John B. Davis Center on June 14.

After passionate public comments, and lengthy debate among board members, the Minneapolis Public Schools Board of Education voted on June 14 to approve the budget for the 2022-23 school year without amendment. The budget includes a $90 million gap between revenue and expenses that the district will close with a combination of cuts to administration, one-time federal COVID relief funds, and use of assigned fund balance.

A majority of board members rejected a motion by Director Ira Jourdain, seconded by Director Adriana Cerillo, that would have shifted $10 million from the unassigned fund balance to schools, increasing funding districtwide by approximately $355 per student. Senior Finance Officer Ibrahima Diop said such a shift would be in violation of the board’s policy to maintain a minimum 8% unassigned fund balance, and harm the district’s bond rating as it continues to implement its 5-year capital plan.

Jourdain echoed public comments earlier in the evening, noting that some of the proposed cuts principals made to meet their budget allocations for next year will impact arts programming, in particular the dance program at South High School. He said that while the district does have mental health supports for students, that arts programs are another way to support student mental health.

Director Kimberly Caprini, the chair of the board’s finance committee, spoke against Jourdain’s motion, saying, “If the board wants to revisit out financial tolerance for risk via fund balance, then that should happen through a change in policy not a budget decision that leaves one value on paper while acting another way.”

The discussion among directors lasted over an hour, with Directors Nelson Inz, Adriana Cerillo and Jourdain speaking in favor of Jourdain’s motion. Directors Jenny Arneson, Sharon El-Amin, Said Ali, and Caprini spoke against the motion. Ultimately the motion failed to gather a majority of board support and was voted down. The board then voted to approve the budget resolution without amendment, with Inz, Cerillo, and Jourdain voting against the budget resolution.

In addition to the budget resolution, the board also voted to approve resolutions for the capital plan, the long-term facilities maintenance 10-year plan, and the long-term facilities maintenance general obligation bonds. The consent agenda, which included nine contracts totaling $37.5 million for bus service and seven contracts totaling $3.3 million for planning bus routes, was also approved unanimously by voice vote.

A few other key moments from the meeting:

- This was Graff’s last board meeting before his contract ends on June 30.

- Board of Education Student Rep. Kennedy Rance announced that she will be leaving her position because her family is moving.

- Rance also shared a “significant moment” of “racism and bias” that she experienced as a freshman at Southwest High School. Her comments start around 3:04:30 in the meeting. Southwest Voices also posted video of her statement on Twitter.

-Caprini will bring a motion at the August 16 board meeting to require Henry High School to change its name.

The board is not scheduled to meet again until Tuesday, August 16.