Kingfield residents have been organizing this summer to stop the installation of a 5G antenna pole at 41st and Garfield, including physicall 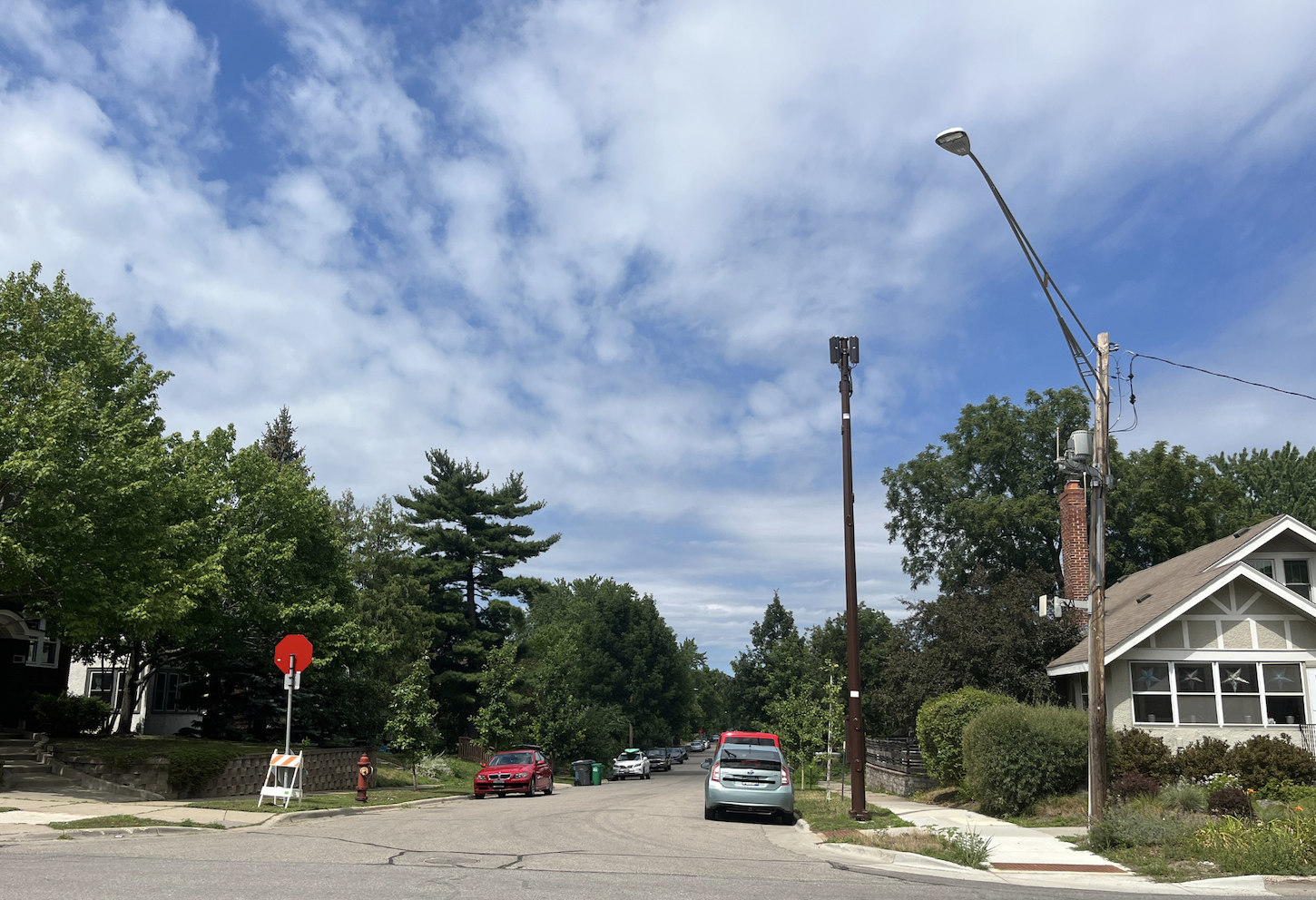 Kingfield residents have been organizing this summer to stop the installation of a 5G antenna pole at 41st and Garfield, including physically blocking the pole’s location.

Verizon 5G antenna poles are being installed throughout the city, which boost internet speeds nearby. The transmission of 5G creates a faster internet speed for people but the coverage goes a short distance. It’s like FM/AM radio–FM radio has high quality sound but the station coverage area is small, compared to AM radio that has a farther reach but a lower quality sound.

A group of Kingfield residents took note of the colloquially-known “5G towers” popping up in their neighborhood this summer and quickly started organizing to stop anymore from going in. The group wants to know more about the physical and environmental impact of 5G technology and why public space is being given over to corporations like Verizon.

Residents are concerned about people with electromagnetic sensitivity being exposed to high rates of radio frequency energy. Mary Bacon, a Kingfield resident who is fighting against the Kingfield 5G antenna pole installation, said there is “not a good set of regulations” around wireless communication technology because “the FCC is dragging their feet.”

The Federal Communications Commission, or FCC, is in charge of regulating telecommunications technology, including telephone wire, fiber optic cables, and wireless technology like 5G. Newer smartphones are now equipped with 5G capabilities.

According to the FCC, “there is no consistent or credible scientific evidence of health problems caused by the exposure to radio frequency energy emitted by cell phones.” In 2019, the FCC voted to maintain its existing radio frequency exposure standards, given the lack of scientific evidence showing bodily harm caused by 5G technology. The FCC last updated its standards in 1996.

In 2021, a federal court ruled in favor of an environmental rights group that sued the FCC. They argued that the FCC had not taken into account new scientific evidence when it was deciding whether to update its guidelines for exposure to radiation from cellphones and cell towers. In the ruling, the court said the FCC had to act in good faith to review the evidence again and provide strong reasoning for not updating its radio frequency energy guidelines.

In its Radio Frequency Safety FAQ, the FCC states, “Measurements made near typical cellular and [personal communication systems] installations, especially those with tower-mounted antennas, have shown that ground-level power densities are hundreds to thousands of times less than the FCC's limits for safe exposure.”

Since 2021, the FCC has been awarding major telecom corporations like AT&T and Verizon, 5G technology installation contracts around the country. Nationally, airports have been asking these companies to curb 5G tower installation due to concerns of radio interference.

The FCC chairperson from 2017-2021 was Ajit Pai, a former lawyer for Verizon. In 2021,Jessica Rosenworcel, a longtime lawyer and FCC commissioner, took over as FCC chair.

Wireless technology, like 5G, is one way to expand access to the internet. Major internet corporations, such as Xfinity/Comcast, have long been criticized for limiting broadband internet technology in rural and urban areas. This inequity was deeply felt during the first wave of the U.S. COVID-19 pandemic.

Physically standing in the way

Both Bacon and Julie Ristau, another Kingfield resident protesting against the 5G towers, insist they are not against technology.

“We just want it to be safe,” Bacon said.

The first time Ristau went out to the 5G antenna pole’s planned location was on May 31. She stood in the way of the installation at 41st and Garfield and successfully stopped the pole from going up.

“It was a week before then that one of my housemates noted there was action on the corner and talked with the folks doing the preliminary wiring,” Ristau said.

June 9 was Verizon’s second attempt at installing the 5G tower. This time, the Minneapolis Police Department were called by Verizon to the corner.

“The police were sympathetic to our actions of protecting our rights to learn more and understand what was going on,” Ristau said.

Editor’s note: A request for incident reports with the Minneapolis Police Department regarding the 5G tower installation is pending with the City of Minneapolis.

July 15 was Verizon’s last known attempt to install the pole. “One of our group members called the police ahead of time,” Ristau said. According to Ristau, there was an MPD officer on the scene at 7 a.m. “monitoring the situation.”

“We were nice,” Ristau said, of the Kingfield protestors’ behavior. “We just stand there.”

The 5G antenna poles are privately-owned on city property. Two 2017 statutes redefined how and what kinds of telecommunication and wireless technology could be placed in a public right-of-way, effectively regulating and allowing for 5G towers to be installed. Given the new statues, a lot of 5G towers are going in.

According to Ristau, the Kingfield group’s next step is to get a cease and desist order for Verizon’s 5G towers at least until City Council President and Ward 8 Councilmember Andrea Jenkins can hold a public forum on the towers.