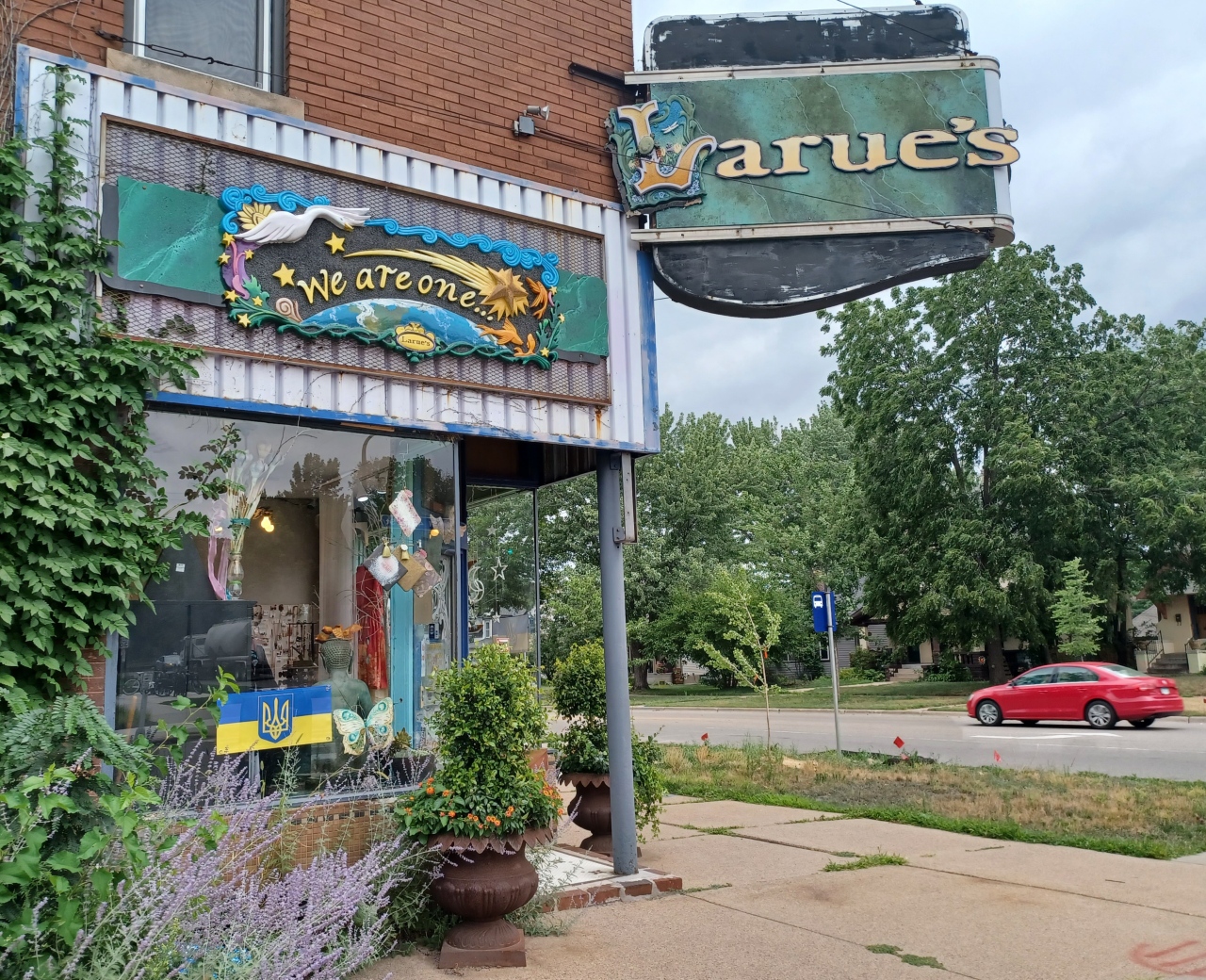 Larue’s owner Kathy Lawrow said she’s sad to leave her corner lot on 40th and Lyndale, where she cultivated the plants lining the shop, but fears that staying open risks her business because she will lose parking spaces.

Larue’s is moving from its long-held corner on 40th and Lyndale to Linden Hills at the end of August. Kathy Lawrow, the eclectic clothing and jewelry boutique’s owner, said that the loss of parking by her shop due to reconstruction on 40th Street and nearby Bryant Avenue will negatively affect her business. Larue’s has been in business on Lyndale Avenue for 35 years.

“I did not choose to move, except I also didn’t want to choose to not be in business,” she said.

Lawrow is moving her store to 4301 Upton Ave. S. The hours, listed below, will stay the same.

Reconstruction on Bryant Avenue and 40th Street, which are two separate projects, aims to increase safety for pedestrians and bikes as well as support public transit. The 40th Street project will create a two-lane, protected bike path like the one on Blaisdell Avenue and will eliminate the parking alongside Lawrow’s store. Both projects are slated for this summer.

Lawrow is a self-proclaimed hippie and owns a bike herself, but worries that bike traffic won’t translate to sales at her shop.

“Biking is such a wonderful thing, but I think there is a limit and there has to be balance,” she said.

Additionally, Lawrow said that customers at the popular Laotian restaurant Khâluna, which opened across the street from her shop in 2021, fill the parking options in the area.

“If I stayed here, I was taking a big chance with the parking, and also this very popular restaurant,” she said. “The minute they’re open, we don’t have any parking. I just thought, let’s give it a whirl.”

Lawrow is disappointed to leave the spot she carved into her own. The store is two blocks from her home and she planted the flowers and trees outside it. Amid the hundreds of pictures, posters and other decorations in the back room of Larue’s is a hand-drawn picture of a strawberry with the date 1997, which Lawrow said her daughter made.

“I think I feel sad because I’ve been such a fixture here for such a long time,” she said. “At the same time, this is kind of an exciting new beginning at a time when most people are retiring.”

Lawrow prides herself on selling just about all-natural fibers in her clothing, which she says is partly an environmental choice and partly because the fabrics feel better on the skin.

“The environmental impact is a huge matter to me,” she said. “You need something that’s biodegradable and ages gracefully, which I think natural fibers do versus synthetics.”

The shop features local designers like James Reilly and Kyra Deva as well as the in-house jeweler, Barb Shelstad. Customers can get custom dresses, including special occasion looks, as well as customized jewelry. The price ranges from $10 earrings to diamonds, according to Lawrow.

“We like giving people the opportunity to just have something that really delights them, instead of trying to make themselves fit into somebody else’s idea,” she said. “They can be part of the creative process.”

The name “Larue’s” comes from Lawrow’s childhood nickname from the 1965 TV show “Gidget.” The distinct signs outside the store will be traveling with her to the new storefront.

Although Lawrow said she never planned on moving after putting down such deep roots at the Lyndale storefront, she sees the move as a new opportunity. The new location has stone floors, tin-pressed ceilings, and other features that Lawrow said she is excited about. She hopes that her Lyndale-location customers will follow the store to Linden Hills and that new ones will find it too.

“I would never have moved except with all– to get a little political here– there is not a lot of consideration for small business by the current powers that be,” she said. “But maybe that was the catalyst that I needed to get my butt out of here and go somewhere else. Maybe I’ll be fabulously successful over there.”

Lawrow said that the last day at the current location will be Aug. 28, and the new store will likely soft-launch on Labor Day weekend.