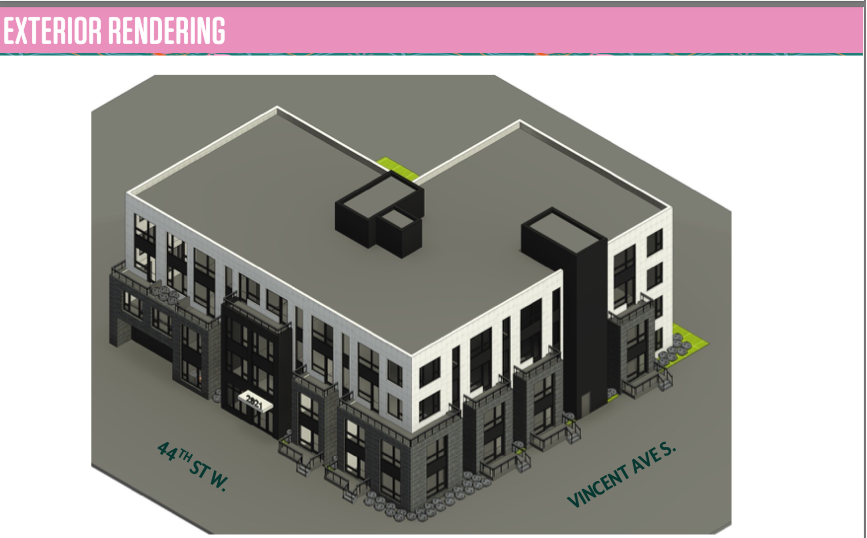 A glimpse at the new 38-unit housing complex slated for 44th & Vincent in Linden Hills. The E Line will run down 44th Street.

There is a new 2040 Plan-friendly apartment complex planned along a new bus rapid transit line. Charlie wrote about the new development planned for 44th & Vincent, spearheaded by realtor Thomas Hertzog and Good Neighbor Homes. The E Line is planned to run down 44th Street.

The development is being planned on three existing single-family lots. I went down a reporter's rabbit hole (that's the technical term) regarding the houses that exist on the development's property with such questions as: I wonder what happens to those houses? Do people live in them?

According to city paperwork, the three single-family homes were built in the early 1900s. None of the homes were found to hold historical significance and will be demolished as part of the construction project.

Two of the homes were last sold in the 1980s for less than $120,000 and one was sold in 2011 for over $300,000. Typically, a plan like this would involve the developer buying the homes from the owners. We have reached out to the planning staff assigned to this project and will let you know what we find out about the general process of turning single-family lots into apartment complexes.

‍If you have any questions or comments about new apartment developments in the city, email us at info@southwestvoices.news or text us at 612-204-2887.

Ride along with us on the Streetcars of Southwest series. On our second stop, we visit the Oak-Harriet and Bryant-Penn lines. All aboard! (I know...the puns make me cringe, too. Must be what it feels like to be a Vikings fan. Constant cringe.)

The Park Board is meeting today at 5 p.m. Park Board Commissioner Elizabeth Schaffer has asked to delay the E Line resolution up for a vote today because Metro Transit and Park Board staff are unable to attend today's meeting. The resolution would be taken up again on November 2.

Schaffer had previously asked to amend the E Line resolution to adjust the location and structure of a couple stops. This amendment in no longer posted on the Park Board website.

A high note in the agenda: $3 million in Coronavirus State and Local Fiscal Recovery Funds is earmarked for funding needs for North Commons Park Improvements, and $1 million for planting more trees. The Park Board notes that both projects are in "disproportionately impacted" communities.

Axois has 25 art events not to miss this fall including the Cocktails at the Castle event this Friday at the American Swedish Institute, Mia's 18th-century French fashion magazines exhibit, and Lizzo coming to the Xcel Energy Center but St. Paul isn't in our coverage area so I won't mention it here. (Axois)

No-knock raids have significantly dropped across the state after the death of Amir Locke in February. (Minnesota Reformer)

Vegan East, whose Whittier location is nestled back on Lyndale Avenue just south of 24th, is opening up a location in Nokomis. The more vegan cupcakes, the better. (Minneapolis St. Paul Business Journal)

The East Harriet Farmstead Neighborhood Association's board meeting is tonight from 7 to 8:30 pm. at the Lyndale Farmstead Park building.

Calling all Southwest High School students. The Navigator, your student-run news publication, is hiring! If you have any inkling of interest in writing or producing media, get involved. Love, a former student news advisor.

Even though it's going to be hot this week, water quality testing at city beaches is done for the season. Keep in mind that Bde Maka Ska's 32nd Street and Thomas beaches have been closed recently due to high E. coli levels.

Trailer Trash and Moxie are playing at Driftwood tonight.

Live band karaoke at Pimento tonight. Who wants to sing Harry Styles with me?

Stand-up comedy tonight at Órale with $7 margs and mojitos.