Residents have been communicating with the city for six years trying to get a growing number of light outages fixed. 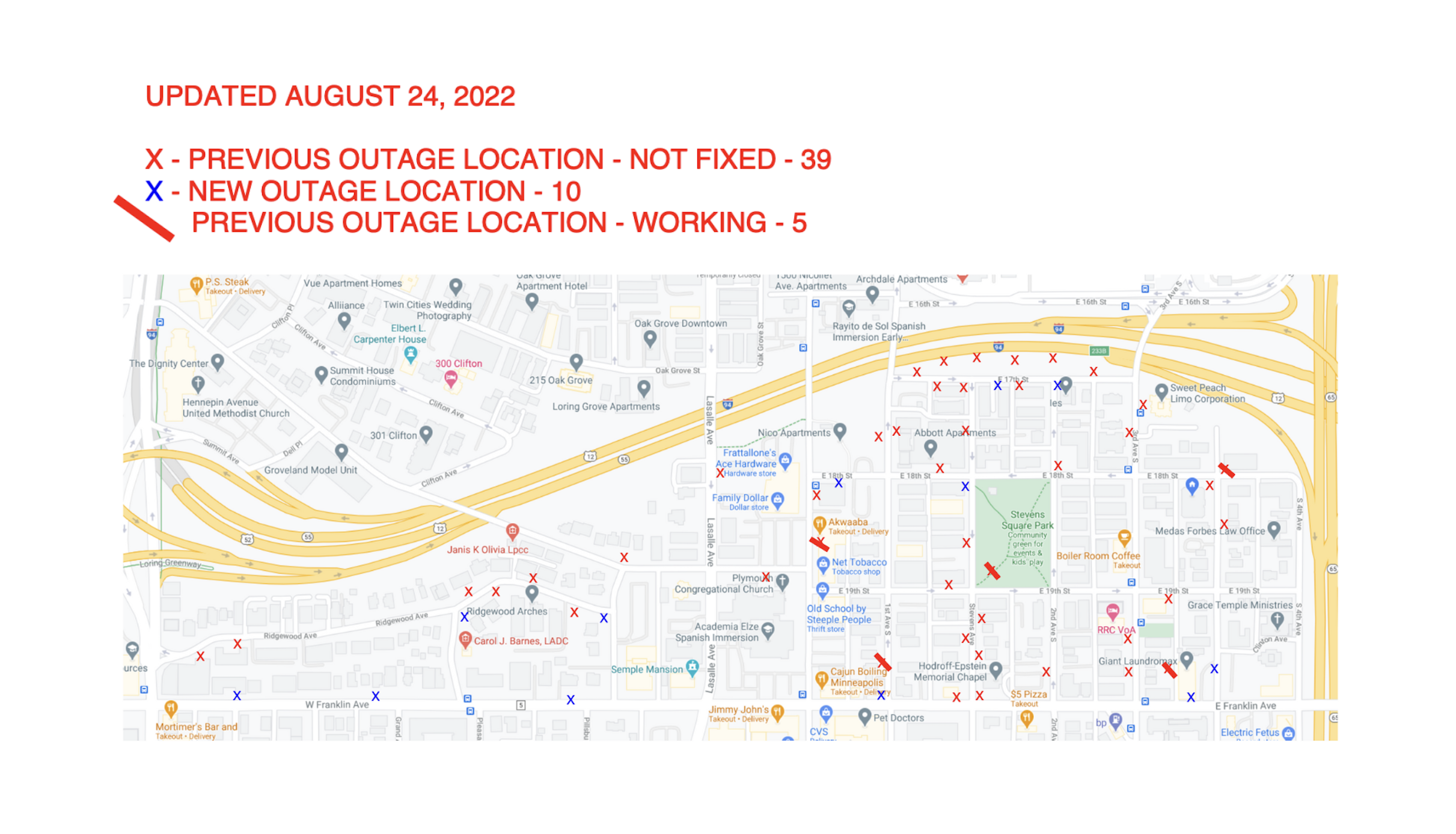 Last week, Mayor Jacob Frey announced a $9 million investment in fixing street lights across the city. Residents in Stevens Square-Loring Heights have been communicating with the city for six years trying to get a growing number of light outages fixed. This week, the lights are starting to come back on.

“It might be Christmas for all I know,” Maureen Wells, a longtime Stevens Square-Loring Heights resident,  said in a message on September 7. “Nearly all the lights on 17th Street are on tonight.”

According to an outage map created by residents Molly Ellis and Maureen Wells, 49 lights in the neighborhood had been out in their neighborhood. Some blocks had numerous outages.

“I am delighted…we finally got heard,” Wells said. But Wells said she isn’t happy it took so long for the city to devote funds “after they’ve done nothing” for years.

“We need to make sure our lighting infrastructure is up to par, that’s we’re resolving some of the backlog that we’ve seen in lighting repairs over the last several years,” Mayor Jacob Frey said during the August 30 press conference announcing the inclusion of funds in the 2023-24 budget to fix lights in specific areas. “Now is the time to do it right.”

Frey cited the Loring Park, Stevens Square-Loring Heights, Marcy Holms, and Como neighborhoods as the main benefactors of the $9 million.

In 1991, the City of Minneapolis signed a 25-year contract with Xcel Energy to provide Stevens Square-Loring Heights with historic lighting. In 2016, that contract ended. The bare wiring that was put into the ground for the lights had worn thin. Lights started going out. In 2019, the Southwest Journal talked with residents who reported 15 to 30 street lights being out on any given evening. In 2019, the City promised residents that repair work would be done by the end of 2021. It was not.

Earlier this year, Ward 6 Councilmember Jamal Osman secured $150,000 for lighting repair in the neighborhood. Residents reported not seeing much difference once that money was secured.

“It’s a public issue at its core,” Osman said at the press conference. “Broken street lights is the biggest complaint I hear from my community.” Osman said at one point Stevens Square-Loring Heights had less than 10 working street lights. With the financial investment Osman said, “My community will feel like they are getting the city services they deserve.”

The Public Works department is in charge of maintaining over 20,000 lights across the city.

“That is the major reason that in a few of our neighborhoods we see total outage,” Anderson Kelliher said.

In March, Public Works mailed Stevens Square-Loring Heights property owners a petition regarding getting the historic lights fixed. Roughly 20% of the 411 petitions sent out were returned. A city webpage with the petition results was pulled down last week.

Due to the low response rate from property owners, Public Works didn’t move forward with getting the historic lights fixed. At most, "the City would explore lighting mounted to Xcel wood poles meeting the City standard for residential roadways, leaving the historic lights permanently broken," a City spokesperson said. "In March, the City coordinated with Xcel, for Xcel to repair 6 lights. The City is continuing discussions with Xcel for the remaining lights that are out."

The petitions were the last residents heard about any attempts to fix their lighting, until the August 30 press conference.

“I am proud of my neighbors for not giving up,” Wells said.