Additional routes through attendance areas are needed, but if no one asks for them, will Metro Transit see the need? 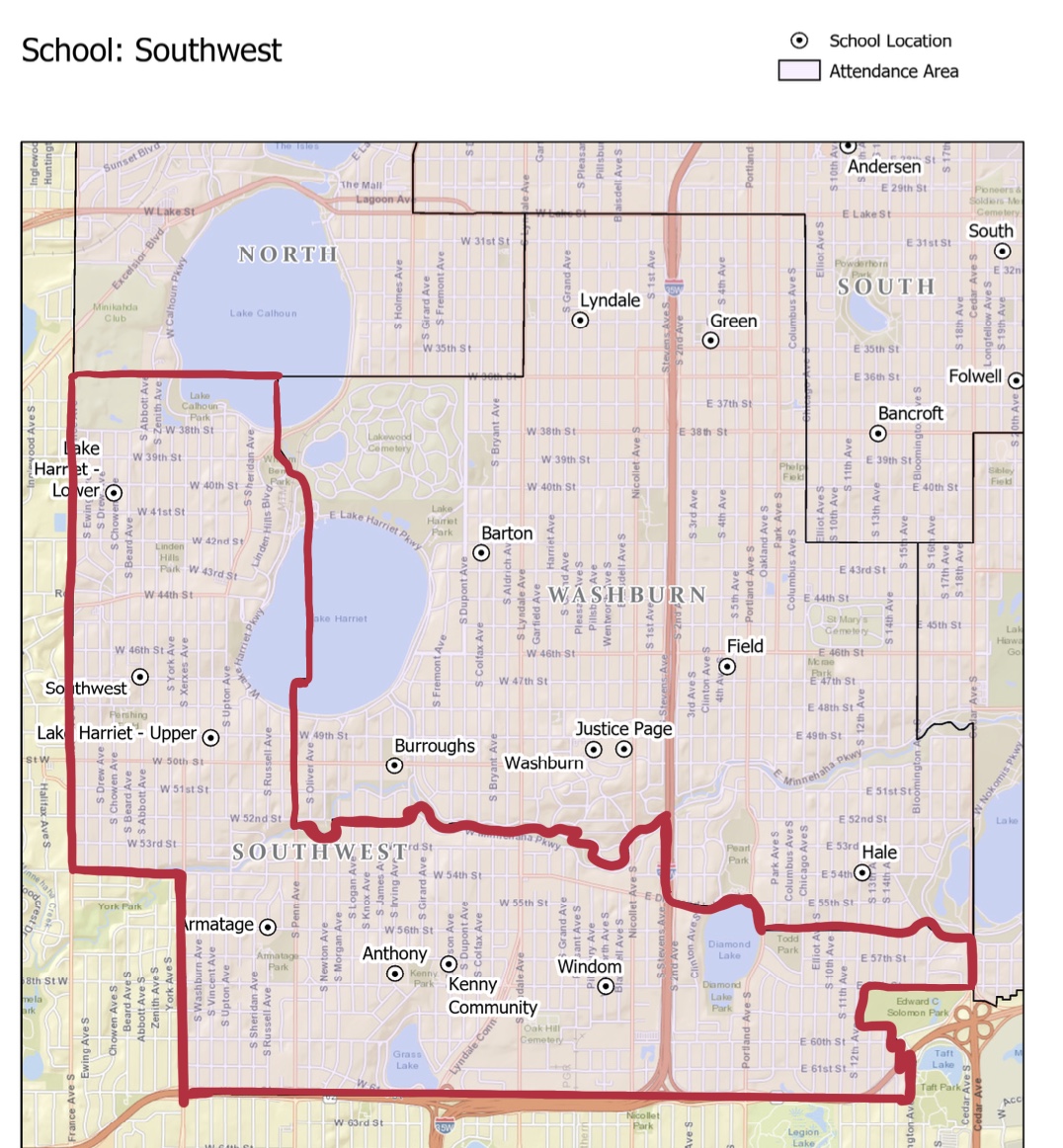 A map of the Southwest High School attendance zone outlined in red.

Last year the Minneapolis Public School’s Comprehensive District Design redrew attendance zones, extending the eastern boundary of the Southwest High School area all the way to Cedar Avenue along the southern end of Minneapolis into the Diamond Lake neighborhood. This part of the Southwest High School attendance zone has very few transit options to get to the school and the options that do exist don’t have appropriate or adequate transfer opportunities. There is a need for more transit options that run east/west in South and Southwest Minneapolis.

Southwest High School is located at 3414 W. 47th Street, a few blocks east of W. 47th Street and France Avenue S. Currently the most direct east/west bus route that services Southwest High School is local bus route 46.  This bus runs along 46th and 50th Street.  This route has connections to north/south routes along Penn, Lyndale, Nicollet, and Chicago Avenues. The other east/west alternatives are local bus route 23 or route 515, both of which go quite north and south, respectively, of the high school.

Using Metro Transit’s Trip Planner, a student from the eastern edge of the Southwest High School attendance zone would need to leave home 45-60 minutes before school starts to barely make it to their first period. If you’d like to map a route yourself, use 5600 Bloomington Ave,, an intersection close to a Southwest High School student we carpool with.

According to Metro Transit’s Trip Planner, a Southwest High School student on the east end of the attendance zone needs to take three buses to get to school. It is a 13 minute drive and a 26 minute bike ride. The bus ride takes, at minimum, 40 minutes.

The lack of transit options has left families with the choice of driving their children to/from school or relegating them to inefficient bus routes with long transfers at stops without shelters. Over the last few weeks I’ve reached out to several MPS board members as well as Metro Transit.  I have illustrated the issues and asked for them to work together to create alternatives.  My proposal is that Metro Transit create routes within the Southwest High School attendance zone that run east/west along W. 54th, 56th, or 58th Streets that take students directly to/from school with no transfers needed, all the way to the eastern boundary of the attendance zone. I believe this proposal is reasonable and has a precedent in commuter routes that once ran into downtown through these same corridors.

A Metro Transit representative responded to my proposal, stating, “We’re aware that travel patterns are likely to shift now that MPS has begun phasing in the new CDD attendance boundaries. However, connections via Route 46 will likely remain the transit option for Southwest students east of Penn Avenue for the foreseeable future due to current resource constraints.”

MPS students have been utilizing Metro Transit for years, but given the new CDD boundaries, we need to have a discussion about what a reasonable time is for a student to take Metro Transit to school.  What is a reasonable amount of time/distance to have to walk to a city bus to get to school?  What is an acceptable amount of time to wait for a transfer?

Metro Transit has continued to make route and schedule changes, as ridership has fluctuated in the past two years (local bus routes 46 and 515 do not have any route changes). Metro Transit needs to increase ridership. There are over a 1000 students at Southwest High School.  Additional routes through the attendance area are clearly needed, but if no one asks for them, will Metro Transit see the need?

I currently have a freshman at Southwest High School and a 5th grader at Windom Community School.  I plan to keep pushing this issue because neither the nearly 40 minute round trip car drive nor the 60 minute one-way commute from Southwest High School is acceptable. Our kids deserve more options.  I hope you’ll join me in contacting your school board member (most likely Nelson Inz or Ira Jourdain), City Council member (mostly likely Linea Palmisano or Emily Koski), and Metropolitan Council member (most likely John Pacheco Jr. or Abdirahman Muse) about how increased transit options would serve your family better.

Southwest Voices has published perspectives on the proposed E Line bus rapid transit that will service Southwest Minneapolis. The D Line traveling on Chicago Avenue S. will open this fall. While having additional rapid bus routes running north/south throughout Minneapolis is welcome, the lack of east/west routes through South and Southwest Minneapolis is a missing puzzle piece that doesn’t truly expand ridership like it could—especially for our students.