Before Liden Hills and Cottage City there was Reyataotonwe, a Mdewakanton Dakotan settlement. 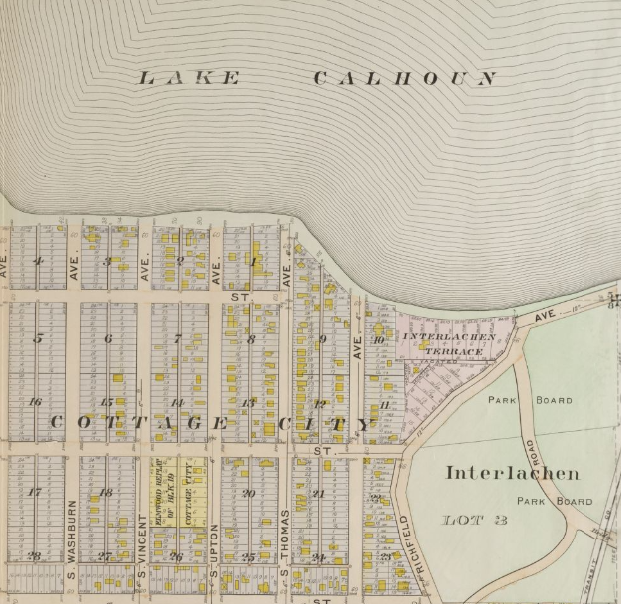 The area just south of Bde Maka Ska's shores is a bustling intersection of life in the city. You will find bikers, dog walkers, beach goers, parents pushing a stroller along with iced latte in hand, a hammock or two, a pickup game of volleyball, motorists honking along the parkway, and a multitude of trails that connect you with the rest of the city.

Years ago, off the south shore of Bde Maka Ska, the summer cottage was the big idea. First planned in the early 1880s, the idea of the Cottage City neighborhood became a reality by 1883. However, history of this area of Minneapolis long predates Cottage City.

Settlement along the south side of Bde Maka Ska first began in 1829. This first settlement is known by many names; Reyataotonwe by the Mdewakanton Dakotans who called this community home, Cloud Man's Village by anglicized historians, and as Eatonville by those who lived at Fort Snelling at the time.

Reyataotonwe was settled by Mdewakanton Chief Cloud Man and his tribe in 1829. Cloud Man chose this location for his village because of its fertile soils and abundant game and wildlife in the surrounding prairieland and woods. It’s estimated that nearly 125 to 150 individuals lived in this community. Cloud Man had an agreement with Fort Snelling Native American agent, Lawrence Taliaferro, to settle the area. In exchange, Cloud Man promised Taliaferro that his community would receive assistance from missionaries who taught the community how to cultivate their fields using a farming plow.

European settlers Philander Prescott as well Samuel and Gideon Pond were dispatched in 1834 to assist Reyataotonwe with their farming and cultivating endeavors. These missionaries were welcomed by the villagers with open arms as they proved to be helpful with not only farming, but education too. The missionaries spoke highly of Cloud Man, stating that he was "a man of superior discernment and of great prudence and foresight."

Life in Reyataotonwe was tenuous. There were several bloody clashes between the Dakota and Ojibwe near these lands. In 1838, the security of Reyataotonwe was in contention when Ojibwe Chief Hole-in-the-Day attacked and killed members of the Wahpeton band of Dakota nearby. Upon receiving this devastating news, Cloud Man knew that he needed to relocate his village to a safer location further from the Ojibwe.

By 1840, Cloud Man and his tribe abandoned Reyataotonwe. They retreated about 10 miles south to safer lands along the Minnesota River to Oak Grove, now known as Bloomington.  The Ponds also relocated to this area. The Pond home was built in 1843 roughly a half-mile from the Oak Grove community where it remains today.

In 1851, the Mdewakanton Dakota signed the Traverse des Sioux treaty. This treaty allowed land west of the Mississippi River to be purchased by European settlers, a concept foreign to the Dakota. A pattern of exile and relocation saw the Dakotan community continuously having to move further and further west away from their native lands.

Fort Snelling and the surrounding area saw many missionaries come and go in the first half of the19th  century. The land we know today as Minneapolis was first settled by Colonel John Harrington Stevens in 1849, nine years after the Mdewakanton Dakotans left Reyataotonwe.

The area around downtown Minneapolis quickly grew in population, prosperity, and size. To further the city's development, the city began to lay rail for an arterial streetcar system that reached out into Minneapolis neighborhoods.

By the 1860s, the community of Reyataotonwe had long since been abandoned. The area to the south of Bde Maka Ska began to fill in with European settlers. In the spring of 1861 when famed author and naturalist Henry David Thoreau visited and wrote about his time on the southern shores of Bde Maka Ska. At the time, Thoreau was suffering from a bout of tuberculosis and his physician proposed that a prescription of fresh air could cure Thoreau’s ailment. For assistance, Thoreau's friend Horace Mann Jr. traveled with Thoreau from Massachusetts to Minnesota in the spring of 1861, arriving in Minnesota in May. Thoreau and Mann Jr. booked lodging at the Hamilton Boarding House on a small bluff to the south of Bde Maka Ska. There, Thoreau swam, wrote, and studied the biodiversity of the surrounding prairie and wooded land. Thoreau and Hamilton returned to Massachusetts in July1861. Never fully recovering from his illness and travels, Thoreau passed away a few months later in May of 1862.

It wasn’t until the 1880s when southwestern Minneapolis began to see an influx of residents. By 1879, the Lyndale Railway Company laid track on what would later become the Como-Harriet streetcar line from downtown Minneapolis to the area between Bde Maka Ska and Lake Harriet. Here, the neighborhoods of Linden Hills and Cottage City began to develop.

Cottage City broke ground in 1883 as real estate investor Louis Menage platted roughly 16 blocks for development just to the south of Bde Maka Ska. The neighborhood was intended as a site for humble lake cottages and three-season cabins. Properties were sold for as little as $125 as dozens of little summer cottages were built on small 25-foot lots in an area bordered by Bde Maka Ska to the north, 40th Street to the south, Xerxes Avenue to the west, and Interlachen Park (now William Berry Parkway) to the East.

Menage cunningly chose the neighborhood name for a reason. Cottage City was a very evocative name for middle-class residents living in downtown Minneapolis. It proposed the idea that people were moving out to the countryside to build a small cottage for their families.

To make the area easily accessible, a streetcar stop was constructed underneath the William Berry Parkway bridge. Known as the Cottage City stop, the remnants of this stop still exist to this day.

Once residents began to move into Cottage City, they were not greeted by the beautiful chain of lakes we know today. During the 1800s, the chain of lakes were shallow, marshy bodies of water. Cautious citizens feared these lakes were ripe with disease owing to the fact that they were insect and algae-filled marshland. In 1911, the city sought to change this perception and make the land around the lakes more favorable to development by digging channels between Bde Maka Ska, Lake of the Isles, and Cedar Lake. The Park Board also deepened the lakes, making them pristine bodies of water for fishing and swimming.

Wirth’s vision for a Lake Harriet canal was supported by residents of Cottage City and Linden Hills. Proposed as the “Venice of the North,” Wirth’s plan was to construct an open canal starting at Bde Maka Ska and Washburn Avenue south to 43rd Street, east towards Thomas Avenue, then south again down Thomas Avenue to 45th Street, and finally east into Lake Harriet. Building the channels between Cedar Lake, Lake of the Isles, and Bde Maka Ska was a relatively small undertaking but a canal from Bde Maka Ska to Lake Harriet would have been a massive public works project for the Park Board. Ultimately the idea was scrapped, but it's wildly fun to imagine a canal cutting through the business district and neighborhoods of present-day Linden Hills.

Once the lakes were dredged and the lakeshores were turned into park land, Cottage City's property values soared. Over the next several decades, many of the small cottages and cabins within Cottage City were torn down in favor of larger, grander homes. Linden Hills and Cottage City’s borders became blurred as the character of Linden Hills poured into Cottage City. Once the streetcars discontinued their service in 1954, even the name Cottage City began to disappear as there no longer was a dedicated streetcar stop for its residents. Colloquially, the neighborhood became synonymous with Linden Hills. By the 1950s onwards, the neighborhood of Cottage City would rarely be found on maps of Minneapolis. Even the cottages that once adorned the streets were, for the most part, long gone.

Cottage City’s location was a blessing and a curse. The location was a portrait of idealism and gentility. However, Cottage City’s modest beginnings became a magnet to the middle and upper-class citizens of Minneapolis looking to live in a nice neighborhood by the lake just a few minutes from downtown. As cottages were demolished in place of regal homes and mansions, Cottage City lost its identity.

Today, there are few clues left of Cottage City. A keen eye can spot two of the original cottages remaining on 40th Street near Upton Avenue, which have been conjoined and are on the National Register of Historic Places. Next time you head to Bde Maka Ska for a Sunday stroll, take a few extra minutes to walk this neighborhood and spot some of these clues for yourself.