Capital planning and surplus facilities were the topics of an informational presentation at school board meeting. 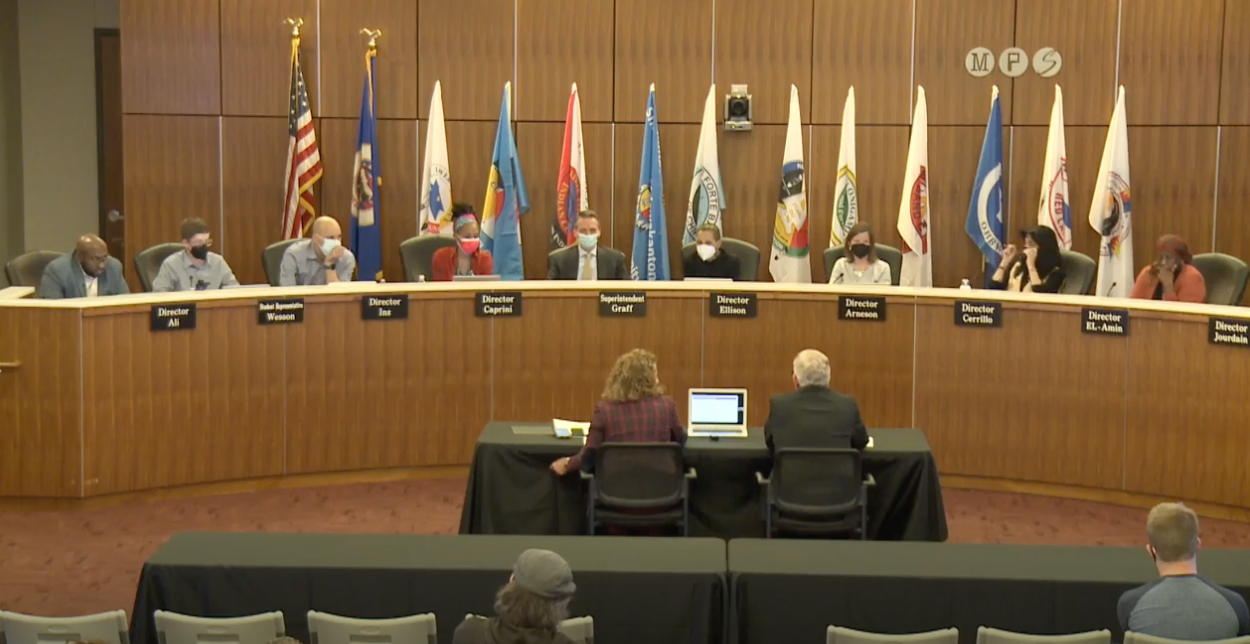 The Minneapolis Public Schools Board of Education Committee of the Whole listens to a presentation by MPS Senior Operating Officer Karen DeVet and Executive Director Curt Hartog on April 26.

Capital planning and surplus facilities were the topics of an informational presentation at the Minneapolis Public Schools Board of Education Committee of the Whole meeting on Tuesday evening. The presentation, made by MPS Senior Operating Officer Karen DeVet and Executive Director Curt Hartog, included an update on the capital investments the district is making, primarily in North Minneapolis. The capital investments are part of the Comprehensive District Design.

The centerpiece of these projects is a multi-year $83 million project to transform North High School, including the construction of a new career and training education center, extensive upgrades to ventilation, mechanical and electrical systems, and bringing more daylight into the building. Currently, many classrooms, hallways and common areas in the building do not have windows.

The new citywide elementary STEM magnet school at Hall Elementary will have an observatory installed on the rooftop. According to Hartog, the observatory is currently being manufactured and should arrive for installation in July.

As part of the CDD, Bethune Elementary School became a citywide elementary arts magnet school. Construction has started there for the addition of a new performance space. Along with the addition, improvements will be made to the existing dance, choir and band spaces at Bethune in order to support the arts programming at the school. These three projects at North High School, Bethune Elementary and Hall Elementary, plus projects at the new citywide STEAM magnet at Franklin Middle School, represent about $93 million in capital investments in northside schools from 2020-2025 as part of the CDD.

A full list of MPS capital projects, along with the details of the projects’ scope, budget and timeline can be found on the MPS website.

The second half of the presentation covered surplus properties within MPS. Last year, the board passed a new policy to guide the district on handling facilities that are designated surplus properties. The policy designates a facility as surplus if it is determined that the district does not need it for a current or future use, and if continued ownership isn’t in the best interest of MPS. The Superintendent and administration are recommending to the board that the Gordon, Willard and Tuttle buildings be designated as surplus. These three buildings were closed in the early 2000s when enrollment in MPS was about 50% larger than current MPS enrollment. These three buildings are part of six buildings the district owns but is not currently using and does not have an active lease.

DeVet said the recommendation is to keep the Hamilton, Cooper, Lincoln and Victory Memorial Ice Arena (VMIA) buildings, and to not designate them as surplus at this time. Board members Arneson and Caprini both noted that the VMIA space has drawn interest from the local community as a space that could fulfill a gap in recreation facilities in the area. Arneson noted that there is a lack of ice time, particularly in North Minneapolis, for hockey. DeVet said that the district is currently using VMIA as warehouse space, and it is particularly valuable to the district because its open space can store construction supplies before projects begin. She said that the district and the park board have previously explored the cost of upgrading VMIA to make it usable as an ice rink. While she did not specify the cost, she said it would be expensive to make the necessary changes.

The presentation laid out a set of minimum requirements for parties interested in purchasing surplus facilities. One requirement is that either the board member representing the district where the facility is located, or an at-large board member, must support the project. In addition, the proposed project should not hinder the mission of MPS. In response to a question from Director Sharon El-Amin about the term “hinder,” DeVet said that as an example, sale to a charter school would hinder the MPS mission.

In addition to the minimum requirements, DeVet also shared a list of priorities for projects with these facilities. Historically, DeVet said that former MPS facilities have been converted into park spaces, freeways or absorbed into the UMN campus. But the largest number of former facilities have been converted into affordable housing. Affordable housing would be one of the types of projects that MPS would prioritize in evaluating proposals for surplus buildings. Another priority would be projects that would support MPS students.