The Minneapolis Public Schools Board of Education met on Feb. 16 as a Committee of the Whole. 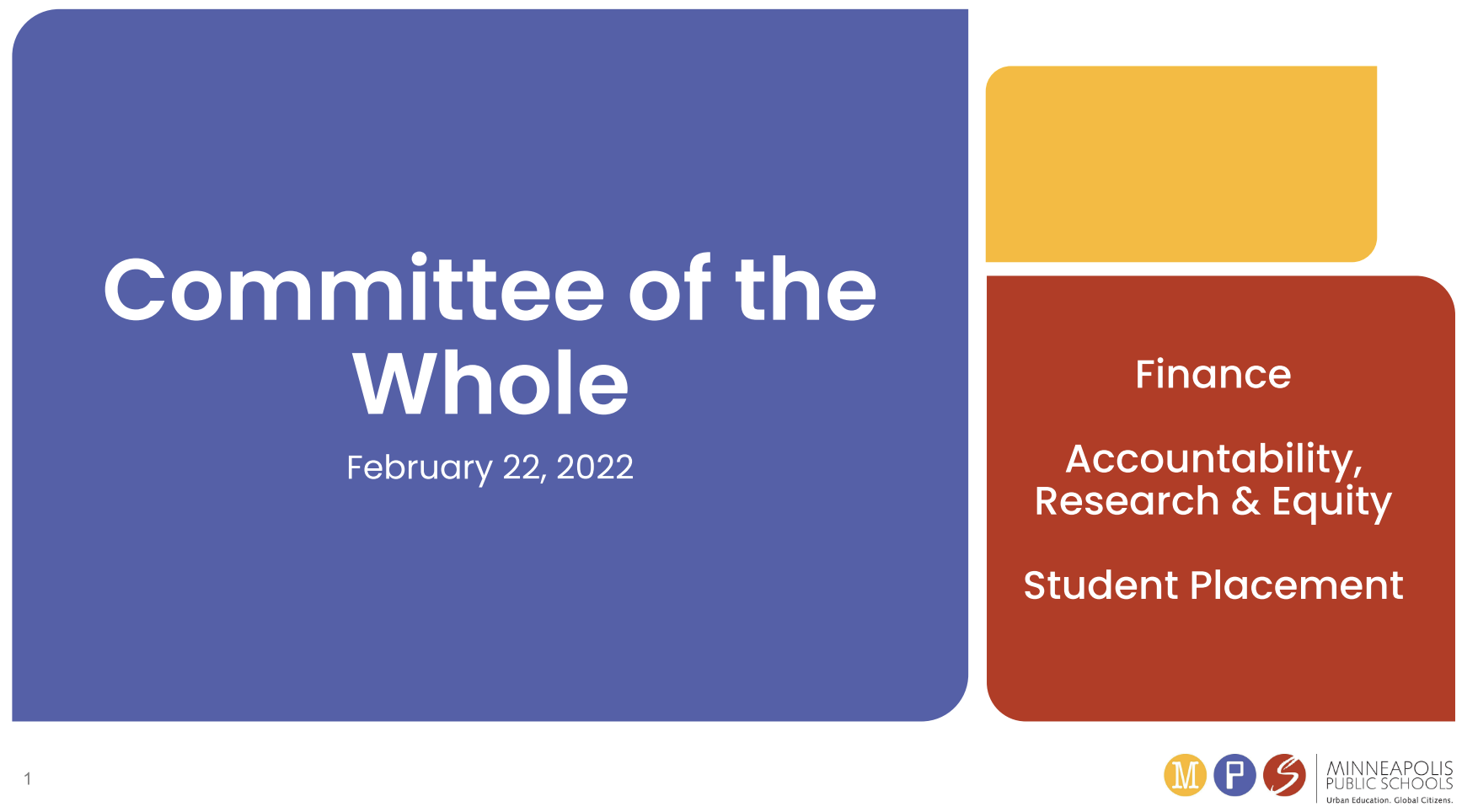 The Minneapolis Public Schools Board of Education met on Feb. 16 as a Committee of the Whole to engage with a presentation on the enrollment and budget challenges facing the district. Before the presentation began, Chair Kim Ellison began the meeting acknowledging the death of North High School student Deshaun Hill. “While we all have a lot of work to do to prevent this continued and senseless loss of young Black lives, this evening I would like to ask us to take a moment of silence and reflection on the life and contributions of this beautiful young man who was taken far too soon,'' Ellison said.

Superintendent Ed Graff introduced the presentation to the board with comments about the financial challenges facing the district. The presentation was made by the Coordinator of the New Families Center Martha Swenson, Director of the Budget Office Tammy Fredrickson, and Senior Officer Eric Moore.

Graff said there isn’t a single factor behind the significant projected gap between revenue and expenditures in the district, but highlighted the recent decline in enrollment, the decades-old underfunding of special education and English learner services, and the increasing costs of operating schools. The district is currently using a large portion of its COVID relief funds to maintain stable staffing and programming in the district. Because these funds are not recurring, the district will face difficult tradeoffs in the near future, but noted the district has excellent staff in place to face this challenge.

During the presentation, Fredrickson said students have left MPS primarily because they have moved out of Minneapolis. Other factors include students enrolling in charters or private schools, and because of concerns about school safety.

Moore said that there is a pervasive perception that the students leaving MPS are white, but the district’s data shows 80% of students who left MPS are students of color, and 62% of those students are African American. The schools most impacted by the departures, Moore said, are in the pathways for North, Henry and South high schools. Because of these departures, Moore says the proportion of district students that are white has increased.

Moore added later in the meeting that families of color report leaving the district due to a lack of academic rigor, a lack of respect, and the safety of the schools. Moore says that on top of these factors, the recent enrollment declines have been exacerbated by the pandemic. He agreed with Director Ira Jourdain who said that racism plays a role in families’ decisions to leave MPS schools.

Moore said that the proportion of MPS students qualifying for free and reduced price lunch has fallen as well as the proportion of MPS students accessing English learner services. Moore said the district is still trying to analyze whether the drop in free and reduced price lunch students is because of students leaving or because of immigration policy changes that caused families to not complete the paperwork. Moore noted that the district is starting to see some Afghan children coming into MPS schools and anticipates that there will be more Afghan students arriving in the near future as refugee families are resettled in Minneapolis.

To add to the discussion around enrollment, Jourdain brought up numerous issues ranging from unpredictable bussing to how the district can increase transparency about its use of federal COVID funds. He also highlighted the role that racism plays in why families leave MPS schools, noting that the word of mouth from parents whose students experience racism at MPS schools is powerful.

Director Sharon El-Amin expressed her concern that schools in District 2, in North Minneapolis, which she represents, are disproportionately impacted by staff layoffs and school closures when enrollment declines. Graff responded that he is aware of the history in the district around closures, and that when he arrived in MPS he encountered calls for expanding particular buildings, instead of changing school boundaries to even out enrollment across buildings.

Director Jenny Arneson said that addressing the current budget gaps will have an adverse impact on students and staff in MPS.

Director Siad Ali asked about the decline in English learners, and asked what the district is doing to recruit students to MPS with its online school. Graff said the online K-12 school had a significant waitlist and currently enrolls over 700 K-12 students. He said the district is investigating ways that it could expand the school and noted that it offers a comprehensive set of services, ranging from physical education courses, special education services, and Ojibwe language classes. He said marketing the program has been a challenge without being able to have face-to-face meetings with prospective families.

Director Kimberly Caprini noted that the city, state and federal government need to step up and help the district.  She said her own children were impacted by previous school closures and reminded people that it’s always the youngest children of color who are most impacted by closures.