New developments on hold due to judge's 2040 plan ruling 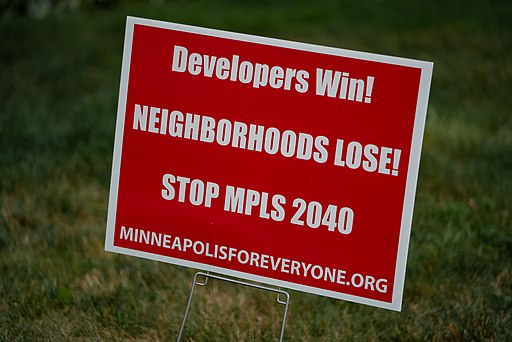 Back in 2018, a required city growth and development plan started dividing neighbors over zoning laws (no pun intended). You may recall the dueling yard signs. “Neighbors for more neighbors.” “STOP MPLS 2040!”

The conflict over the 2040 Plan did not end with its adoption.

On June 15, District Court Judge Joseph Klein ruled in favor of the three groups–Smart Growth Minneapolis, the Audubon Chapter of Minneapolis, and Minnesota Citizens for the Protection of Migratory Birds.

This district court ruling immediately stopped all actions that can be approved within 2040 Plan, including some housing developments.

For example, the City Council had several rezoning motions pending at its June 16 meeting. All of these applications were postponed to the June 30 meeting while the city attorney’s office reviewed the district court’s decision.

This could be a temporary stoppage if the city succeeds in repealing the ruling.

For example, if a duplex is being developed on a plot of land that was previously single-family zoned, that project would have to stop.

The court’s ruling will also have impacts on development projects which were recently approved by the council, but need to come back with additional approvals before they are deemed “final.”

Current applications are also effectively blocked for now, unless the application would have been allowed under the 2030 Plan.

Developers we spoke with for this story asked not to be named. They affirmed that all development processes at the city level are frozen.

“Everybody is kinda scratching their heads,” one developer said.

In its arguments for the stay, the city notes the “chaos” which has been caused by the order.

If the request is granted, a stay of the order would delay the order from taking effect until the appeal is concluded, meaning that the 2040 Plan could again move forward. At the time of this writing, Judge Klein has not issued an order regarding the motion for a stay or regarding the requested expedited briefing schedule.