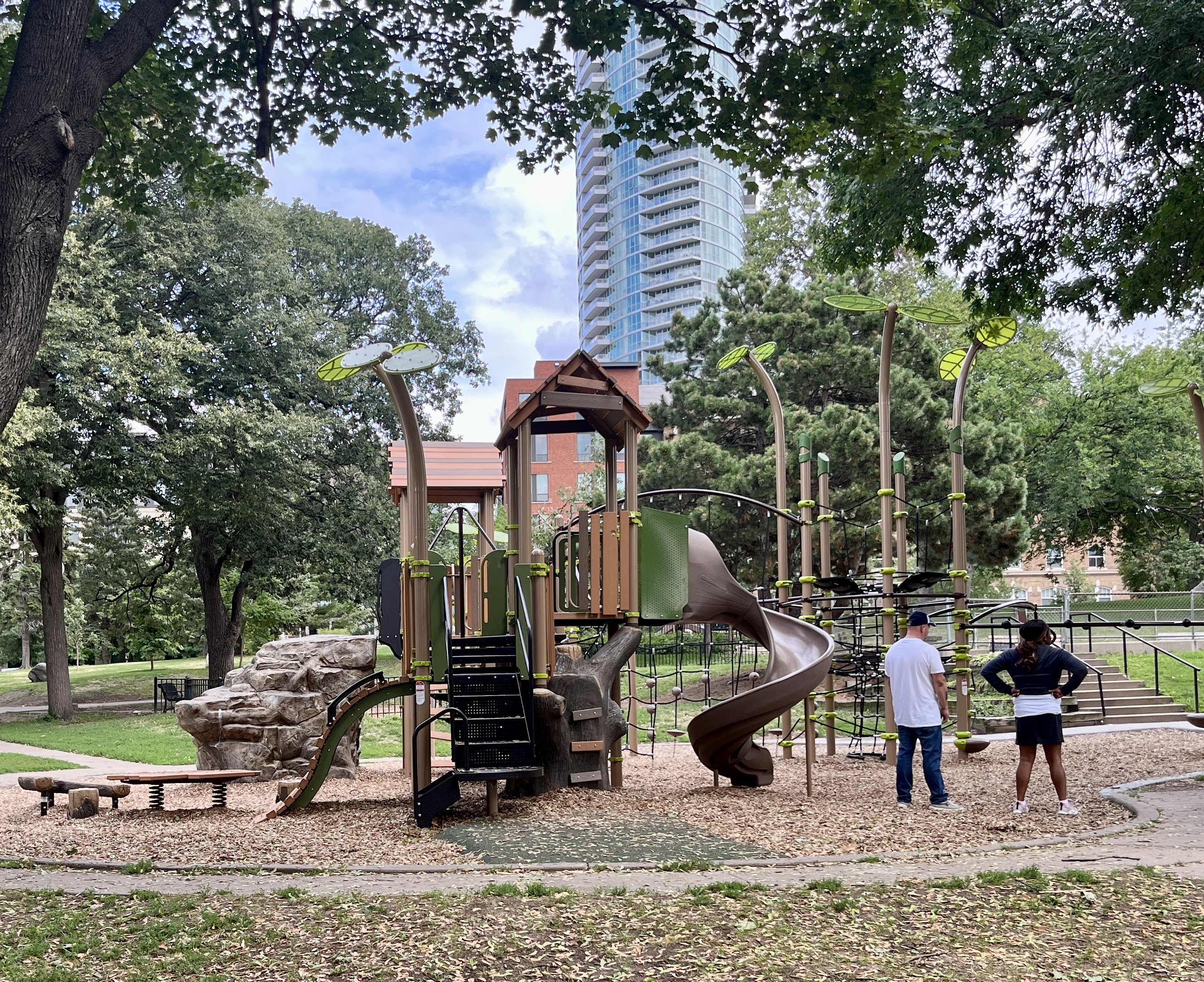 The new playground at Loring Park. Citizens For A Loring Park Community partnered with the Park Board to bring new tennis courts and this play area to the park.

The Park Board meets tonight and will discuss a federal transit resolution and the future of Hiawatha Golf Course tonight.

Some of the parks near the proposed E Line route are protected under federal law, so the Federal Transit Authority looked at the project and determined that the route will have very minimal impact on those parks.The Park Board will vote on whether to concur with those findings.

District 4 Park Board Commissioner Elizabeth Schaffer proposed two resolutions to be added to the Federal Transit Authority resolution about the E Line rapid bus line project. Specific to the Bde Maka Ska Parkway & Richfield Road stop, Schaffer's resolution states "The height and electronic messaging of the NexTrip sign is not beneficial for wildlife near lake shore parks" and she resolves for the NexTrip sign to be "reduced in size and included as part of the shelter structure (or other determined minimizing design) or if easier, removed from the Richfield Road/Bde Maka Ska stop."

The board can vote on Schaffer's resolutions tonight.

Thanks to Josh Martin for contributing to this reporting.

On Monday, the Park Board held a ribbon-cutting ceremony for the new tennis courts in Loring Park. The Park Board worked with numerous stakeholders, including Citizens For A Loring Park Community, to bring the tennis courts and a new playground to the park. The DeLaSalle High School tennis program will also be using the courts for practice and matches.

"Steadfast partnerships made this happen," Meg Forney, president of the Park Board, said. The two projects took seven years to complete.

"What a transformation," Al Bangora, superintendent of the Park Board, said on Monday before the ribbon-cutting.

"Loring Park is about bringing people together and building community," Park Board Commissioner Elizabeth Schaffer said at the ceremony.

The School Board met last night for its first regular business meeting of the 2022-23 school year. Melissa Whitler followed the meeting on Twitter and will have a summary of the meeting up later this week.

This was the first board meeting for Interim Superintendent Rochelle Cox. At the meeting she spoke about vacancies in the district and her work this summer visiting students at summer programs. The board also heard updated enrollment numbers, which show about 3,300 students have left the district since last year. About 60% of those students are Black and Somali.

The State of Minnesota is expanding its free meal program for students. Any student enrolled in Medicaid will be automatically enrolled or re-enrolled to receive free school meals, as part of a USDA pilot program. (Bring Me The News)

Ukrainian teenagers are coming to Minnesota to play hockey while their families stay back. "I call it next generation hockey," a hockey coach from Ukraine said. (WCCO)

"Hero pay" applications are being denied due to ID verification and income levels. (MPR News)

You are invited to give input on what the former Wells Fargo building at 3030 Nicollet Avenue should be named. The Cultural Wellness Center and Melanin in Motion are hosting the first of three community listening sessions is tonight at 6 p.m. at the Blaisdell YMCA. Food will be served.

For the first time in over a month, all the Bde Maka Ska beaches are open!

Minneapolis has three bike parks for kids to practice their biking skills. Check them out in Bryn Maw, Nokomis, and Northeast.

The East Isles Neighborhood Summer Social is tonight from 6 - 8 p.m. at Joanne Levin Triangle Park at 26th & Irving. Ice cream, puppets, food trucks, a bounce house, and music will all be there.

Paint roses while you sip rosé tonight at Primitiva. Plus, you get to shop Primitive goods after-hours.

Want to learn how to canoe and/or hang out with Park Board naturalists? Head to Loring Pond at 5 p.m.