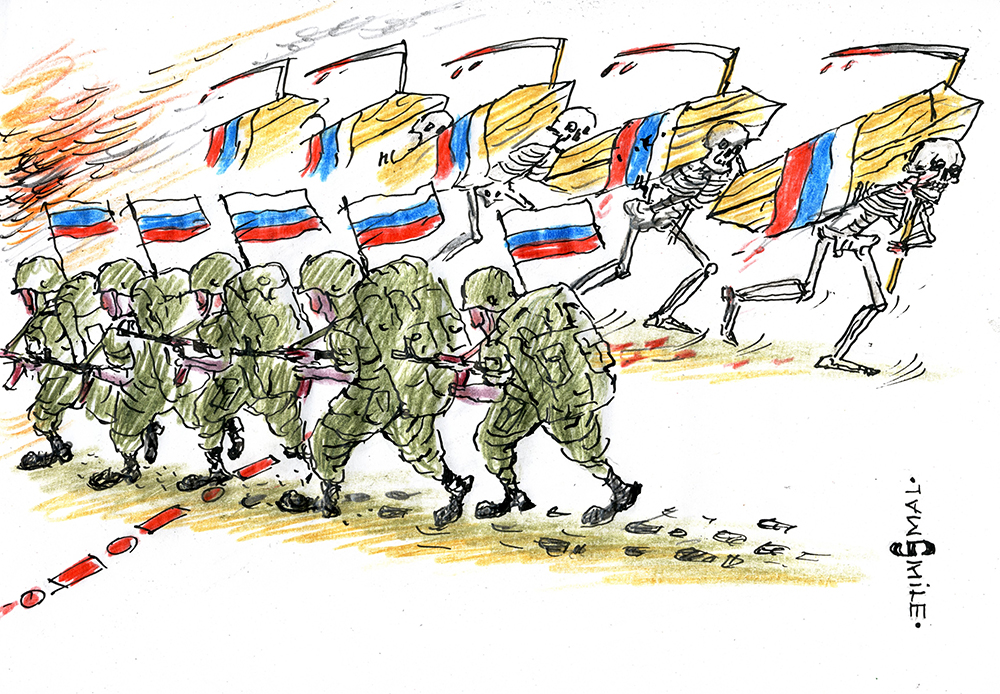 "There and Back," a political cartoon by Oleh Smal on display at The Museum of Russian Art

By Michelle Massey, Director of Public Programs & Marketing at The Museum of Russian Art

The Museum of Russian Art has recently expanded its “Say No to War: Political Cartoons by Ukrainian and Russian Artists,” exhibit. The collection includes recent works by renowned cartoonists from Ukraine and Russia drawn in response to the Russian aggression in Ukraine.

The exhibition is a collaboration with Minnesota artist Andrey Feldshteyn, who has worked in the genre of political cartoons for four decades. At the beginning of the war, Feldshteyn approached a number of artists with an invitation to share their works for this exhibition and they sent their amazing works to be displayed here in Minneapolis.

“Wars destroy human relationships. But political cartoonists inhabit a country of their own governed by the law of the genre. We collaborate in international projects, express our anti-war sentiment during war-time, and support colleagues who suffer persecution,”  Feldshteyn writes about the exhibit.

“At the beginning of this war, I wanted to attract artists to a collaborative project exposing the aggressor, pointing to the perpetrator, and uniting artists against our common enemy, Putin’s regime waging a war of aggression in Ukraine.”

The Museum of Russian Art is demonstrating its solidarity with the people of Ukraine and against Russian aggression in a number of ways. There are the visible aspects,  painting the Ukrainian flag over one of its outside banners and blue and yellow flowers in its gardens.  The museum also published a public statement at the beginning of the invasion and hosted fundraisers with community partners for Ukraine relief.

“Say No to War: Political Cartoons by Ukrainian and Russian Artists,” will be on display until the end of the war.