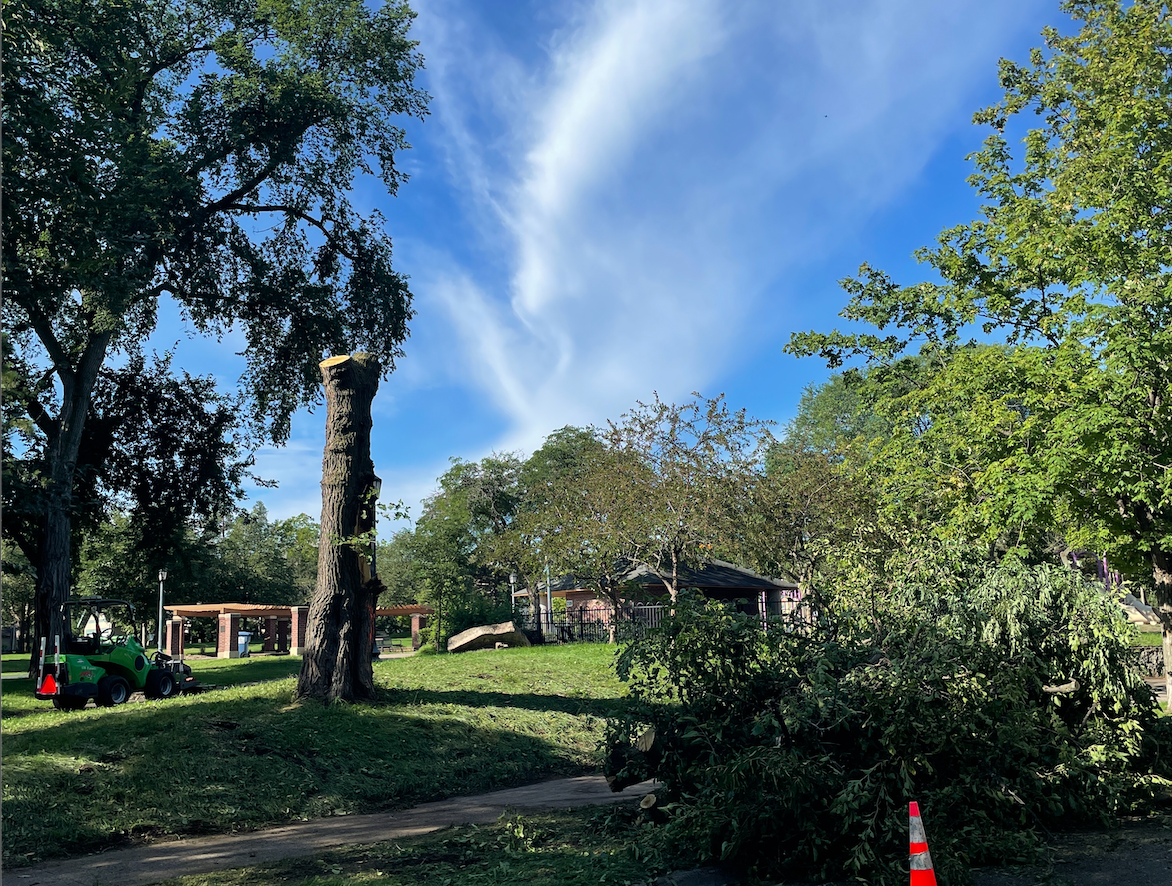 This weekend's storms took down a huge branch of a tree in Mueller Park. Here's how it looked after crews trimmed the tree down.

Want to get to know Aisha Chughtai? Melody shadowed Ward 10's councilmember to get a behind-the-scenes look at what her job is like, how she makes decisions, and what she's thinking about when taking votes or meeting with constituents. We'll have more of these to come in late fall.

Renters in Minneapolis have a lot of legal rights – many that they probably aren't aware of. Thankfully, Anna put together a guide to what you need to know about protections that you have if you're renting your place. From landlords to roommates to security deposits, she covered a ton of ground.

Anything we're missing that you have questions about? Shoot us a note and we'll try to get it added.

This weekend's storms took down a bunch of trees across the city – but they also caused a major digital disruption to city services. Yesterday, we told you that LIMS (which stores the city's Council agendas and more) was knocked out. Today, the city's Service Center at 505 Fourth. Ave. S will be closed as well.

From the city: "The center is expected to reopen Wednesday.  Among other things, the outages are preventing City staff from processing data involving licenses, permit applications and renewals, utility bill payments and police records. Minneapolis’ 911 center and other emergency services are unaffected. Minneapolis 311 continues to answer calls 7 a.m.-7 p.m. Monday through Friday. However, the services provided will be limited until the systems outages are resolved."

Southwest High School's Navigator newspaper caught up with staff who are moving on this summer and asked them what they will miss about the school. (Navigator)

Cool Story, a local ad agency, put together a video about Barbers on Bryant and their owner, Gabriel Arrazola, who came to Minneapolis from Oaxaca and eventually opened the store at 2920 Bryant Ave. S. (Cool Story)

Metro Transit has an excellent discount program for low-income transit riders, but tons of folks that are eligible haven't signed up. Help spread the word! (Minnesota Reformer)

Thanks to a bill passed by the legislature and signed by Governor Walz last year, more households will be eligible to receive food stamps starting this week. (Star Tribune)

The Granada Theater's bar/restaurant, The Uptown Lobby, will be pausing operations after their chef was in a car crash. They're going to regroup and restructure before opening back up. (Uptown Lobby)

A bunch of you clicked on the story about Schatzlein's Saddle Shop announcing their closure this week. If you want to know more about them (like how they catered to horse-transportation in Lake Street), check out this story Cathy Wurzer did on them in 2007.  (MPR)

There are TONS of Board and Commissions openings in the city. Want to help guide city planning in Minneapolis? Civil Rights? The environment? Aging? Arts? Police conduct? Check out the full list and get your application in by September 30.

Today through Thursday, homeowners can buy a tree from the city for 30 bucks. Think it sounds too good to be true? It's not! Click the link and prove me wrong, tough guy.

The Park Board needs referees! If you want to get paid while making youth soccer or football games happen, they're hosting clinics tomorrow night on both soccer and football refereeing at Northeast Recreation Center, located at 1530 Johnson St. NE. Soccer is from 6 - 8 p.m. and football is from 7 - 9 p.m.

The Park Board also needs Zamboni drivers at Parade Ice Arena! Do you have any idea how cool you'd be driving a Zamboni? All you need is to be 18, have a driver's license, and have "some mechanical aptitude." Personally, I can check two of those three boxes.

Want to tour the Southwest Light Rail site (like reporter Henry Pan did)? There's a tour of the Kenilworth LRT Tunnel on Thursday, September 22 from 1:00 - 2:15 p.m. Attendance is capped at about 15 participants, so sign up here soon if you want to go. If you are part of a group that may have interest in a separate tour of a specific area of the LRT corridor, contact outreach coordinator James Mockovciak at james.mockovciak@metrotransit.org

The School Board's Finance Committee is meeting at 5 p.m. They'll be discussing an ESSER funds update. ESSER funds are K-12 emergency funds, the majority of which were awarded through the March 2021 American Rescue Plan.

Minneapolis has a first-time homebuyer credit available to lots of residents. Check out the details and see if you're eligible here.

The last Field & Festival market of the year is at Wagner's Garden Center tonight from 4 - 7 p.m.

There's a solidarity action with workers at the Millienium Minneapolis hotel that want a new contract at 12 p.m.

A deaf LGBTQIA+ support group will be meeting at Family Tree Clinic in Stevens Square at 6 p.m.

The movie "Soul" will be playing at Martin Luther King Jr. Park starting at 8:05 p.m. Because that's when the sunsets now. Sigh.