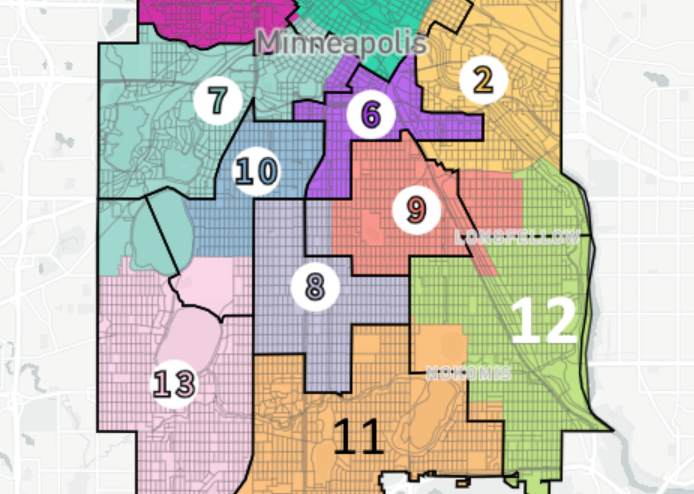 Redistricting occurs every ten years, utilizing U.S. Census data, to balance populations among districts. This process occurs not only for congressional and state legislative districts, but also for local wards and park districts in Minneapolis. Different areas of the city grow at different rates, which is made clear by the Census. For example, the downtown and riverfront area have had especially rapid growth.

The new maps are supposed to follow several rules:

The final public hearing on these proposed redistricting maps will be on Feb. 24 at 4 p.m.

Zooming in on Southwest

There are two changes to Southwest in the proposed ward map and three changes in the park district map. The ward maps reflect city council representation.

East Harriet was united in Ward 13, which was previously split between Wards 10 and 13. East Harriet residents and the neighborhood association pushed for this change, suggesting the neighborhood would be better served in one ward and that it had more in common with Ward 13.

West Bde Maka Ska was moved from Ward 13 to Ward 7. This was done partly to balance the population after the unification of East Harriet. There have also been suggestions that the area fits better in Ward 7, but there was less discussion of this change than the change to East Harriet.

Key issues for the park redistricting map beyond Southwest

At first, it seemed the Park Board map would be relatively simple. The group made a few small changes in October 2021 to balance population so the districts were within the 5% variation. A letter from the Park Board, however, requested that the Redistricting Group attempt to keep the population variance even closer. A particular area of concern was that the districts in South Minneapolis were underpopulated, which gave those areas (which tend to be whiter, wealthier areas) outsized power in elections. Additionally, the Park Board requested that the Redistricting Group work to create a second majority-minority district. Currently, only District 2 fits that description.

The Redistricting Group worked to accommodate the Park Board’s request and balanced population more closely, although there was some disagreement within the group about whether it was necessary to do this or if population variance didn’t matter so long as it was within 5%. The Park Board map went through several more iterations to reach the current proposal.

Key issues for the ward redistricting map beyond Southwest

An early discussion for the group was whether to create a “Downtown Ward.” After a heated discussion and a close vote, the Redistricting Group opted not to pursue creating a Downtown Ward.  Several members of the group suggested a ward which would combine many of the downtown neighborhoods into a single ward. Currently, the downtown area is split between several wards, primarily Ward 3 and Ward 7. Some members argued this would help to keep a community of interest together, while others suggested it was beneficial to keep downtown split so that multiple council members would represent the interests of the area.

The current drafts do not remove any City Council or Park Board members from their wards or districts. Early in the process, there was initially significant disagreement on the Redistricting Group about whether council members’ addresses should be considered in the process. An early draft inadvertently removed Council Members LaTrisha Vetaw and Jeremiah Ellison from their wards. After community feedback and research from legal counsel, the Redistricting Group reversed course. The boundaries were restored.

The final public hearing on the proposed redistricting maps will be on Feb. 24 at 4 p.m. Speakers can sign up here. Comments can also be submitted in writing here or here.

After the public hearing, the Redistricting Group will meet on Feb. 25 and Feb. 28 at 4 p.m. to review feedback and make any final changes before proposing final maps to the Charter Commission. The Charter Commission will vote on the final approval of the maps on March 2 at 4 p.m.