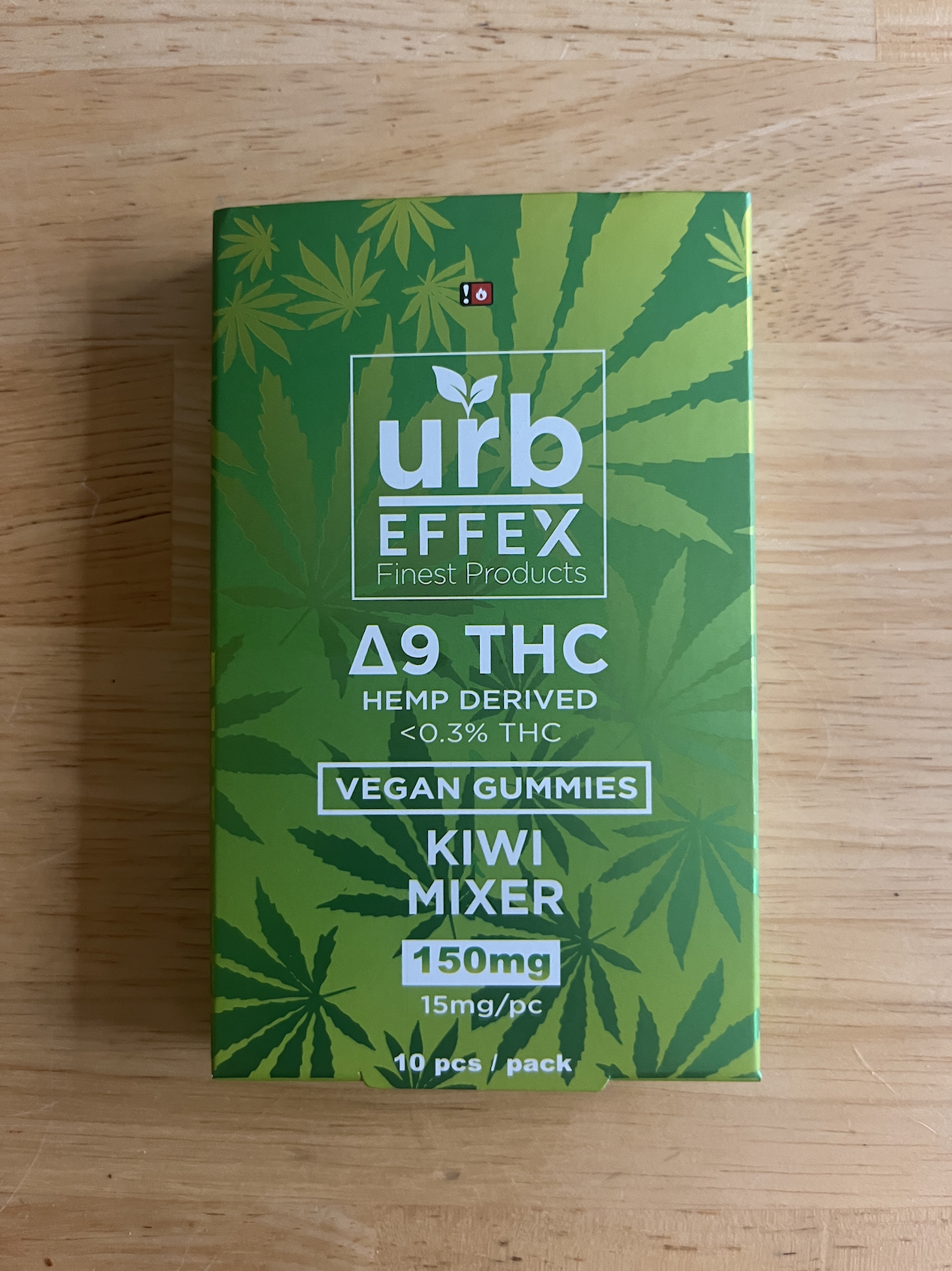 A delta-9 product that technically shouldn't be on the shelves anymore, due to the dose being above 5 mg.

Delta-9 edibles have been legal in Minnesota for a month, but what about all the other edibles you could buy at Loon Smoke Shop, Legacy Glassworks, Hemp House, and even places like Kyle’s Market? Most of them need to be off the shelves by now.

Based on the Minnesota bill that brought you legalized Delta-9 from hemp, any product containing more than 5 mg of THC-0, HHC, Delta-8, Delta-9, or Delta-10 need to be off Minnesota shelves today. Hemp House and Legacy Glassworks have been selling off their stock via 50% off sales. The Minnesota bill that went into effect on July 1 included a one-month grace period for businesses to sell off their products instead of having to toss them.

So why am I publishing reviews of products you can’t technically buy right now? Touché. Except:

I am sure you can still find these products in Minneapolis. (Editor’s note: you can)

These hemp-derived THC products can easily reappear on shelves in smaller doses and be sold legally in Minnesota. It’s the 5 mg dosage rule that impacts what can be sold in stores, not the type of product.

Even though people are most excited about Delta-9 products, the other hemp-derived THC products are created in a similar way and, frankly, get you high.

You can still buy these products in Wisconsin. Given Minnesotans’ propensity to cross state lines for other hard-to-get-products on any given Sunday, I figured this to be a public service for your out-of-state adventures. As the old PSA says: the more you know.

This is not a  scientific study. These reviews are for entertainment purposes only. Take smaller doses of any intoxicant until you learn how your body reacts. With these products, at worst you may get wicked cottonmouth, lose the ability to sound intelligent, have a massive craving for Oreos, and/or want to take a nap.

Three locals agreed to sample hemp-derived THC products and text me their reviews. I am changing their names lest a nefarious employer or Twitter bully finds them out.

Despite the similarities, we did not steal Racket’s review idea. I have receipts showing I was baking up this idea way before Racket published theirs. What can I say? Great minds think alike

Delta-8 has been legal in Minnesota since 2020. Delta-8 is an isomer of delta-9. An isomer is essentially the same formula but with a different atom arrangement. The only difference between delta-8 and delta-9 is the location of a double bond between two carbons (Hello, high school chemistry class).

Hemp-based delta-9 is newly legal in Minnesota and the kind of hemp-derived THC everyone is talking about. Delta-9 is found in marijuana-based THC but talented chemistry folks (see above) found a way to create delta-9 from hemp.

Delta-10 is an oft forgotten strain but is part of the CBD-turned-THC product boom. It is made with the same process as the other deltas. According to High Times, “Delta-8’s double bond is located in the 8th carbon, Delta-9 in the 9th carbon, and Delta-10 in the 10th carbon.”

HHC is made from delta-8 concentrate. The delta-8 is hydrogenated using a pair of active catalysts, often heavy metals, to form HHC. HHC is not a THC product because of its chemical structure (again with the chemistry class).

THC-O, like HHC, is made from delta-8. Acetic anhydride is added to the delta-8 THC molecules to produce THC-O acetate.

Ok, that is enough science. On to the reviews.

Scarlet: A total THC n00b but up to try anything that is relatively safe. Scarlet played pinball during some of her testing.

Tony: A knowledgeable marijuana and CBD user. Tony enjoyed his products at home.

Stevie & Jocelyn: A couple who are prescribed medical cannabis and also eat commercial marajuana edibles. They tended to try their products before bed.

And me, Melody: I’d call myself a THC late bloomer. In the late 90s, I would watch my friends get high in Perkins parking lots while I drank coffee and smoked cigarettes. I’d say I’m currently in a stoner phase (hi dad!). I tried the products at various times and locations.

Scarlet: Two hours after eating the edible, she asks herself,  “why am I so bad at pinball right now? It’s like I’m too slow hitting the flippers. Ooohhh yeah. That edible.” Then, she proudly beat one of her high scores at pinball.  Five hours after she ate the gummy she is still feeling it: slightly light-headed, throat close-y, a little dizzy. She’s ready for a nap, but not ready to go to bed. “Where are my snacks?!” she texts. Scarlet really struggled to fall asleep that night.

Stevie & Jocelyn: This one hit about an hour or so after they took it but it didn’t last as long as commercial marijuana gummies. Stevie got up to pee around 2:00 a.m. and didn’t feel as high as she would expect. Jocelyn took half of the delta-8 round lump last night and said she “felt it more” than the other ones we’ve tried.

Melody: Delta-8 edibles tend to have a sativa high attached to them–you are alert but a bit goofy. I can function on delta-8 and feel awake–especially at night. This is my favorite of them all, and has been for a year.

Scarlet: Two hours after taking half a dose, it was a tiny bit noticeable. She couldn’t think of the word “chocolate syrup” and instead ended up saying “cocoa liquid.” “I don’t think this was a strong enough dosage for me. I would say I very mildly noticed a difference,” Scarlet texted me.

Stevie & Jocelyn: They split a delta-9 dose. Jocelyn said she felt it but it was somehow different as compared to marijuana commercial gummies. Steveie feels like it *may* have made her sleepy, but she didn’t experience the entire body melting relaxation she does with medical cannabis or commercial gummies.

Melody: I find it to be a head high, versus a body high. You may feel wooshy and calm. I got a brief heady high. It’s fine.

Tony: The effects announced themselves about 30 minutes in. Pretty subtle at first but intensified. He was able to finish cleaning up the kitchen and finish all chores before settling in for some screen time. Red eyes were also pretty pronounced so he put in some eye drops. Overall, it seemed to have more of a body effect.  Even at peak effects he found his thoughts clearer and less wandering.  He was able to compose some texts to a friend finalizing plans for the next morning without too much trouble. He googled delta-10 and learned it is supposed to be a “energetic high” which seemed to track. When he wasn’t ready for bed, he took to some other task: pre-made the coffee for the morning and set the timer on the coffee pot. Finally, he was able to calm the thoughts and fall into a dreamless sleep about 5 hours later. Next morning I was pretty groggy from poor sleep. Downsides were the strong side effects (cotton mouth, red eyes, not able to sleep). More mental clarity was nice but not sure it was “worth it” for such strong side effects. He wouldn’t seek it out again but would maybe try again during the day time.

Stevie & Jocelyn: “Two hours later neither of us are feeling anything. So I’m eating the last 10mg,” Stevie texted me.

“Jocelyn said she felt it a little shortly after I reported we both felt nothing. I got nothing from it, even after taking [more].”

Melody: My only field notes are “not all that interesting.”

Tony: Subtle, very subtle. So much so that I thought it was a dud for quite a while. Eventually I noticed it shifted my perspective ever so slightly. It didn’t make me drowsy but I was more content spending time on the couch than I normally would. Good for a lazy day.” Tony recommends this product for beginners.

Stevie & Jocelyn: Stevie reported that the HHC had the same effects as the other products they tried. “As compared to conventional stuff–milder, not as fully embodied deep relaxation… but it did help me sleep,” Stevie told me. “When I got up to pee (I’m old, it happens every night, sometimes twice) I didn’t feel as stoned or wobbly on my feet as I do with conventional stuff,” she texted me later.

Melody: This stuff puts me to sleep. When I was at a music fest in rural Wisconsin (I know), I tried half of a HHC gummy (25 mg) and had a great semi-conscious nap. I managed to snap out of it and felt energized soon after. Subsequent HHC use has confirmed that this is an indica-based high for me. A worker at Hemp House told me he pairs HHC with a Red Bull.

I didn’t have any THC-O product to give to the testers so you’re on your own with this one. In my experience, it’s a nice clean high but it doesn’t last as long as other marijuana products. I’d like to try THC-O edibles, for reporting purposes. Whether they reappear on the shelves is anyone’s guess right now.

Delta-8 and delta-10 can make you too alert to sleep. HHC is a soothing high. These products don’t last as long as marijuana products and are sometimes “duds.”

I didn’t think I needed to track emojis sent to me but the only emoji sent was this one: 🤷 (the shrug emoji).