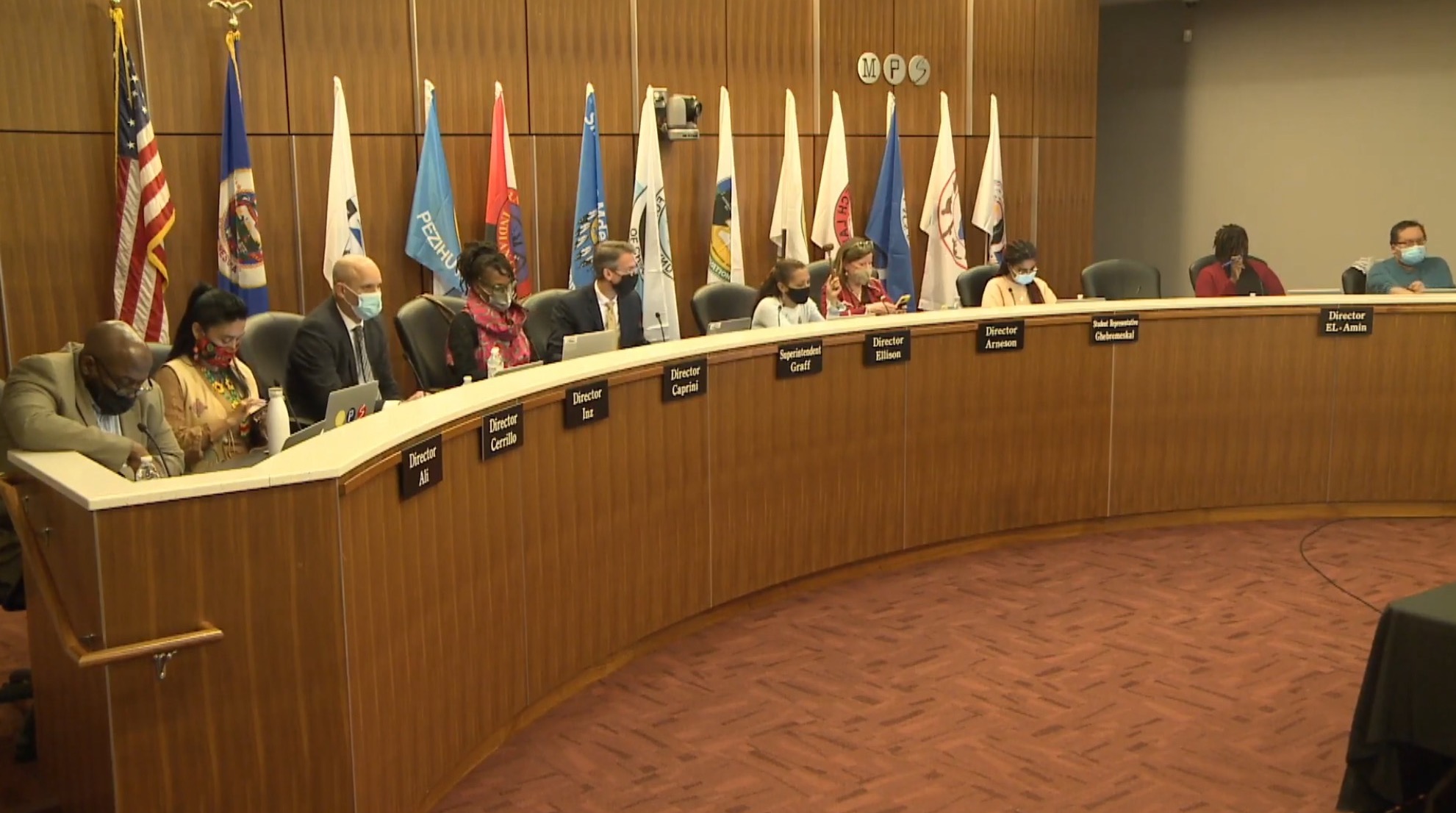 This meeting was covered by MPS parent Melissa Whitler, who has been following the School Board meetings for several months. She wrote up some deeper notes in this Twitter thread.

Tuesday night's Minneapolis Board of Education (School Board) meeting was one of the longest since the pandemic started, and covered a variety of topics, including the Comprehensive District Design (CDD), enrollment numbers, an update on their strategic plan, a resolution around a proposed education amendment to the Minnesota state constitution, and COVID-19 testing for unvaccinated student athletes.

The board meeting started with updates on the CDD, which was approved just as the pandemic started in April 2020. The CDD changed school boundaries, redesigned the district's magnet schools, and changed the way families could choose schools within the district. In addition, the CDD set in motion work in the district to address academic quality, investments in facilities and improve the climate in schools so that all families and students feel safe and welcome. The updates included information on improvements being made to the new magnet schools, including the addition of a rooftop observatory to Hall, which is now home to a K-5 STEM (science, technology, engineering and math) magnet program. One of the lesser-known parts of the CDD is the district's plan to develop its own licensure program. The district is working with the state to finalize the development of this program. Set to begin in 2023, it will provide a tuition-free option for unlicensed Minneapolis Public Schools (MPS) staff to earn their license while simultaneously working in MPS schools. One aim of the program is for the district to diversify the background of its teachers.

The district also shared the most recent enrollment data, which shows a continuing decline in students to 28,689 as of October 1, 2021. This is slightly lower than the figure presented to the last Finance Committee meeting, which was 29,144.

After the CDD update, the board discussed its mission and vision statements which they began developing in August as part of a new strategic plan for the district. During their previous discussions, Director Inz had asked for the word "anti-racist" to be inserted into both the Vision and the Mission statement. In addition, Director Cerillo had brought up the need to change the word "well-rounded" because it does not translate in a meaningful way into Spanish. There was tense discussion about the term "well-rounded" in Tuesday's meeting, along with a desire by some board members to use language that highlights a focus on the decades-long failure of the district to address the achievement gap between white students and students of color, as well as students who qualify for special education, English language, and homeless & highly mobile services. As MPS Senior Accountability, Research and Equity Officer Eric Moore stated again last night, "Minneapolis is a high-achievement district for our white students, but it is not for our students of color." The board agreed to work to develop new language before the next meeting so that it can be voted on, and district staff can continue their work on the strategic plan.

Continuing with the strategic plan development, Sr. Officer Moore shared the metrics that the district will use to measure each of the four goals in the new strategic plan – academic achievement, student wellbeing, effective staff, and school climate. Discussion centered on how the district will measure whether families and students feel welcome at their schools, and whether effective teachers, as measured by the district, will be equitably distributed. MPS Senior Human Resources Officer Maggie Sullivan acknowledged that the district continues to have a pattern where the least experienced teachers are concentrated in schools with a high proportion of students who qualify for free and reduced priced lunch.

The board voted to approve two resolutions, in addition to the consent agenda and bond sales. The first resolution will require student athletes to test weekly for COVID-19 in order to participate, with an opt-out for athletes who are fully vaccinated. This resolution from Director Arneson was approved unanimously, with Directors Pauly and Jourdain absent. The second resolution was to express support for the Page Amendment only if the wording is changed to address concerns about funding and standards. The resolution passed 4-3 after tense debate when Director Arneson called the vote. Directors Ali, Cerillo and El-Amin voted no, while Directors Pauly and Jourdain were absent.

There was much more happening Tuesday night, so please check out the Twitter thread for more details.