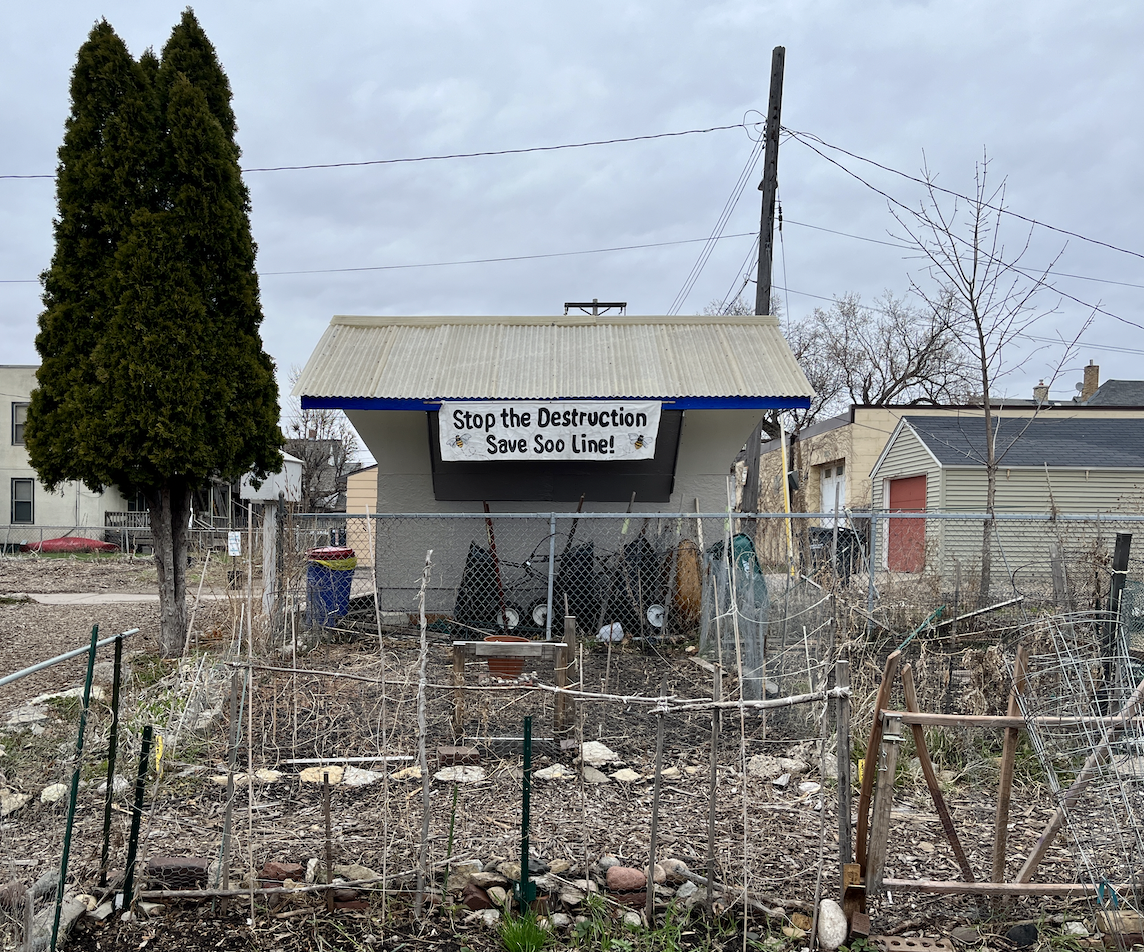 A banner at the back of the Soon Line Community Garden reading "Stop the Destruction Save Soo Line!" faces the Midtown Greenway.

This article is a companion piece to the community post, "Soo Line Gardens Doesn't Need a Paved Path."

Soo Line Community Garden members and Hennepin County have been at odds over an ADA-compliant ramp that is set to be installed through the garden down to the Midtown Greenway. This ramp, to the north of the Midtown Greenway, services the Whittier and LynLake area. This area is underserved by accessible ramps to the Greenway.

This idea to install a ramp at this juncture came from a 2016 study funded by Hennepin County focusing on how to connect Lake Street to the Midtown Greenway.

The Minneapolis Park and Recreation Board needs to approve the final ramp design before construction can begin. The plan will move to the Park Board once the public input process is complete–hopefully by the end of 2022.

During the early phases of the path development, Hennepin County formed a stakeholder group, of which members of the Soo Line Garden community participated.

People involved with the Soo Line Community Garden are worried that the paved path will ruin the garden. On its website, the organization notes that in the summer 2021, “Gardeners learn of Hennepin county's years long plan to pave a ‘bike expressway’  through the garden stretching 10 feet wide and over 500 feet in length. A liaison committee gets to work preventing the destruction of this untamed green space in our dense urban neighborhood.”

Some Soo Line gardeners proposed an ADA-compliant path on the south side of the trail, beginning behind businesses on the east side of Hennepin Avenue. Hennepin County has been insistent that a southside path is untenable.

And this is where the conflict begins.

Space is a also major consideration because ADA-accessible ramps require a particular length to keep the ramp at or below a 5% grade, or slope. In a 200-foot area through the garden, 400 feet of path is needed to maintain a suitable grade.

The southern land where the gardeners suggested an ADA ramp has been preserved by HCRRA for future transit use. The area needs to remain clear of pedestrian infrastructure due to the possibility of transit being constructed there in the future. Klein said pedestrian infrastructure would slow down the construction in that area and made reference to the slow-moving Southwest light rail project as an example of what the county would not like to deal with in the future.

There is no current plan for a transit route in that area. “No elected official is championing the street car” on the Greenway, Jensen said.

But, there are a lot of speculative resources on the concept. There is a 2010 University of Minnesota study titled “Connecting the Midtown Greenway Streetcar to Lake Street Destinations” and the imagining of a bus or light rail line running down the Greenway. Beyond that, nothing is in the works, according to Klein.

“We support an ADA ramp in the area,” Jensen said. “But we believe that placing it on the southside of the trail is also a viable option.”

Jensen understands Hennepin County’s claim that the “potential rail line would not fit in the Greenway if there was a ramp on the south side across from the garden.”  The Soo Line gardeners created a diagram showing how a ramp could be compatible with a future rail line in the Greenway. According to Jensen and a gardener, the community was not allowed to present a revised diagram, after getting feedback from the county.

Klein said that any plan that was designed on the south side would not be considered and that is why the county declined the gardeners’ second presentation.

Opponents of the Soo Line Garden ADA ramp point to the Green Crescent project, which includes a ramp that was recently built on the southside of the Greenway as an example of Hennepin County going against its “no southside ramp” policy. “It clearly isn’t a policy, it’s more of a preference,” Jensen said.

According to Klein, not all the land to the south of the Greenway is preserved by HCRRA. The Green Crescent project is a one-block thoroughfare between Lake Street and the Midtown Greenway, which includes a path down to the Greenway. Klein explained that the Green Crescent project was “very unique” because a lot of space was cleared for the 35W expansion. The area was larger than the land near the Soo Line Garden.