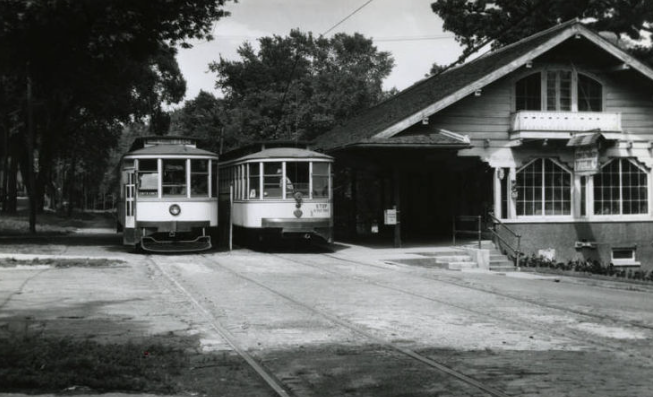 Two streetcars stopped at the 42nd Street Station in 1948.

In this series, we will explore the many streetcar lines that ran through Southwest Minneapolis. Let's begin with the Como-Harriet Line.

On June 19, 1954, the last of the Twin Cities lemon-yellow streetcars rumbled into their station and marked the end of the era of streetcars in Minneapolis, St. Paul, and the surrounding metro.

The trolley was gone forever, with the city reassuring that the conversion to buses was a good thing for the city and its residents.

Buses were heralded as providing more efficient transportation, being more adaptable to service needs than the streetcars. With greater maneuverability in traffic and being more economical, the bus was touted as providing greater convenience than their noisy, yellow counterparts.

With the conversion to buses, the city felt that its farewell to the partnership of tracks and trolley wires would be an aesthetic improvement to the city.

The streetcars proudly served Minneapolis for nearly 75 years. President of the Minneapolis Streetcar Company, later to become Twin Cities Rapid Transit, Thomas Lowry, oversaw the early growth of the streetcar lines across Minneapolis and St. Paul. Lowry's vision for the streetcar system essentially gave way to land for zoning. Residential neighborhoods could be planned near parkland and lakes. Whereas businesses, factories, and manufacturers could be nearer to transportation centers by railway and along the Mississippi River. Residential neighborhoods and industrial centers would be connected by streetcar. Where streetcar tracks were laid, neighborhoods and businesses would follow.

Streetcar lines adopted either the name of the road it traveled or a nearby landmark. Streetcars were known to bring neighborhoods and people of different ethnicities together to share common spaces, unlike the interstates that were later constructed specifically to segregate neighborhoods and peoples. The streetcars of Minneapolis served citizens of all ages, occupations, genders, ethnicities, and creeds.

Streetcars could get you anywhere in Minneapolis. On summer evenings, passengers could ride the Come-Harriet line to enjoy a concert at the Lake Harriet Pavilion. On gameday, fans rode the Nicollet or Lake Street line to watch the Minneapolis Millers play at Nicollet Park. Over crisp autumn weekends, ridership soared on the Bryant-Penn line as passengers traveled to Lynnhurst Park and Minnehaha Creek for picnics. Shoppers would travel the crosstown Lake Street line that served the commercial and business districts through south-central Minneapolis.

In its heyday, 41 distinct streetcar lines served all neighborhoods of Minneapolis. Several of these streetcar lines were dedicated to serving neighborhoods and residents of Southwest Minneapolis. Some lines, such as the Como-Harriet, were much more significant than others due to the places they served and the number of passengers that rode them. The relative significance of a streetcar line is attributed to the contextual history and photographs that remain of its lines. Some lines have thousands of photographs and witness accounts, whereas others were much less influential and therefore have little historical context remaining.

The stretch of track south of Lake Street on the Como-Harriet and Oak-Harriet lines may not have been the world's loveliest street car ride. But on a warm summer day, it surely was a close contender for that honor. This line entered Southwest Minneapolis just past the Basilica of Saint Mary. The yellow trolleys passed through the iconically miserable bottleneck where Lyndale and Hennepin merge. With Loring Park's picturesque 36 acres of parkland to the east, and the Walker Art Center anchoring the western side of the avenues; there was little room for the onslaught of cars to maneuver past the streetcars at this converging of avenues.

Exiting the bottleneck traveling south, the trolleys climbed up Hennepin Avenue South into the Lowry Hill neighborhood. Taking a commanding spot in the middle of Hennepin Avenue, the streetcars passed many business districts and brownstone apartments along the East Isles and Lowry Hill East neighborhoods.

The streetcars continued south down Hennepin entering the Uptown business district at  Lagoon Avenue & Hennepin. The St. Louis Park line connected to the Como-Harriet line at Lagoon & Hennepin up until its abandonment in 1938.

One block further south at Hennepin & Lake, the streetcar met another junction with the Selby-Lake interurban line that headed east all the way across the Mississippi River to downtown St. Paul. The Selby-Lake line also connected to the Bryant-Penn, Grand, and Nicollet lines in Southwest Minneapolis.

Heading south yet another block, the Como-Harriet line passed the old Dodge dealership (now Magers & Quinn Booksellers), made a jog to the west and exited the Uptown business district onto 31st Street. The streetcar line strolled down 31st Street for three blocks until the streetcar turned south through a private right-of-way in the alley between Irving and James Avenue.

The streetcar continued south passing along gracefully wooded areas of William Berry Park, near 39th Street & Sheridan Avenue, at 45 miles per hour, buzzing by the once used Cottage City station underneath William Berry Parkway, and making an important stop at 42nd Street near the Lake Harriet Pavilion.

The 42nd Street Station was specifically built for passengers visiting Lake Harriet and its pavilions. Designed by Harry Wild Jones, who also designed two of Lake Harriet's pavilions, the 42nd Street Station operated a dining room, candy store, and a jail cell in the basement for the Minneapolis Park Police. This station stood until the end of streetcar service in 1954. The depot operated by the Minnesota Streetcar Museum at this location now is a replica of the early 1900s depot that was replaced by the Harry Wild Jones structure in 1912.

Of the many buildings designed and constructed by Harry Wild Jones on the northwest shore of Lake Harriet, only the bathrooms built in 1892 remain. These structures can be found just to the north of the Lake Harriet Bandshell off the Grand Rounds bike path.

Heading south from Lake Harriet, the Como-Harriet streetcar climbed a small hill away from the lake turning west, paralleling 44th Street. The streetcar made another stop beneath Linden Hills Boulevard where the present day Minnesota Streetcar Museum Car Barn is located.

The next major stop on the Como-Harriet line was in the heart of the Linden Hills business district between 43rd and 44th Street and Upton Avenue. Known as "The Loop," this section of track was endearingly named because the line once terminated here via a circular track in the early 1900s. By 1905, the streetcar was extended westward beyond Upton Avenue. The loop continued to be used as a turnaround until its dismantling in 1939.

West of Upton Avenue, the Como-Harriet line had a dedicated right-of-way paralleled by 44th Street. This right-of-way merged with 44th Street at Beard Avenue near present day Turtle Bread Bakery and Café Ceres.

The section of streetcar line down France Avenue was first opened in the mid 1920s, remaining in operation until 1952 when the line was closed due to neglected maintenance of the tracks.

In full, the Como-Harriet line operated a passenger service from the 1880s through 1954 when the city nixed the streetcars.