The mood at the meeting was indicative of the mood in the district. 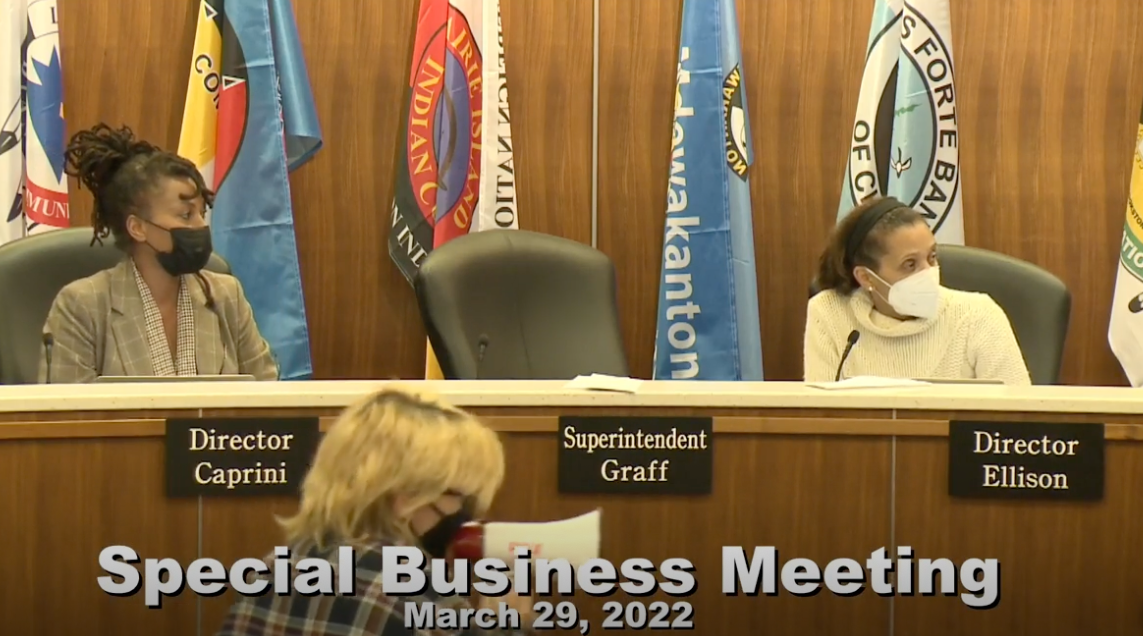 A student with a bullhorn walks in front of the MPS School Board after the board had returned from recess during its special business meeting on March 29.

On March 29 the Minneapolis Public Schools Board of Education held a special business meeting to vote on a resolution to modify the school calendar. The modified calendar reflects the Minnesota Department of Education regulations on school days and hours, and the return to work agreement that was negotiated with MFT teachers and ESPs to end the strike.

Once a tentative contract agreement was reached with MFT teacher and ESP chapters, MPS and MFT had to negotiate a return to work agreement in order to end the strike and have staff return to buildings.

After the resolution passed, the meeting erupted in shouting from audience members, who identified themselves as students, teachers and parents, expressing their disagreement with the way the additional minutes and days of school will negatively impact them. During a recess, Superintendent Ed Graff left the room when the students began shouting profanity.

After the recess, two board members, Directors Adriana Cerillo and Sharon El-Amin, also left their seats because they did not want to vote without Graff present. The board clerk, Director Nelson Inz, took a roll call vote through audience shouts on the calendar resolution and the resolution to pass the consent agenda.

The mood at the meeting was indicative of the mood in the district. Although the strike by ESPs and teachers has ended, parents, students and staff are still coming to terms with the fallout of a strike that kept students out of school for 15 days. These missed school days come after already enduring three years of disruptions to in-person school and instructional time due to the pandemic.

Breaking down the MPS calendar and Minnesota state law

Prior to the strike starting on March 8, the MPS calendar for the 2021-2022 school year included 170 school days. School buildings in MPS have different lengths of the school day, with six hours of instruction being the most common. With that calendar, most seventh- and eighth- grade students only had a few hours of instruction beyond the state minimum.

During the board meeting, MPS Senior Academic Officer Aimee Fearing explained that by the second day of the strike, most seventh- and eighth- graders were already below the minimum number of required instruction hours. Fearing said that the district had initially hoped the strike would end quickly enough that the additional instructional minutes could be made up by adding 30 minutes to the end of some school days, without having to extend the school year. Because many buildings include students with different minimum instructional hours requirements, and instructional hours vary across buildings, the calendar modifications required balancing those as part of a single district wide calendar because some district operations service multiple buildings. Fearing acknowledged the challenges the new calendar will present for some students, families, and staff members.] She also noted that it is district practice that schools try to make accommodations for extenuating circumstances.

MPS General Counsel Amy Moore explained at the board meeting that throughout the strike, both MPS administration and the MFT leadership were in contact with the Minnesota Department of Education about the impact the strike would have on meeting the state requirements for instructional hours and days.  She said that despite MPS and MFT phrasing the question in multiple different ways, both parties received the same answer- the Department of Education has no authority to waive the instructional hours and days requirements, and that any instructional time that was missed due to the strike would have to be made up to meet both minimum hours and days.

MPS Executive Director of Human Resources Candra Bennett explained to the board the nine-hour process that MPS and MFT underwent to reach a return to work agreement to end the strike. She said the return to work agreement and the contract were voted on and ratified by MFT teacher and ESP members on Saturday and Sunday, and that this was a prerequisite for staff returning to buildings on Monday and students returning on Tuesday.

The impact of the modified calendar

El-Amin highlighted the impact that the extended school hours and school year will have on students and families in District 2 in North Minneapolis. In particular, many students have after-school jobs and summer jobs that have already been impacted by the change in hours and length of the school year. She noted that Henry and North High Schools already have longer school days than other high schools in MPS. She expressed that she did not want to vote on the calendar modification without gathering community input. El-Amin also asked whether the calendar modification would apply to all district employees, including those providing support services in schools as well as district administration staff. Bennett told her that some support staff, like counselors, social workers and nurses, are covered by the MFT collective bargaining agreement, but that MPS is currently in discussions with other bargaining units about the impact the return to work agreement will have on them. Bennett said that the transportation staff has expressed a desire to support students, including by working this coming Friday, which was originally a day off from school for students.

Inz spoke in favor of the resolution, noting that the return to work agreement had been reached through the bargaining process with the MFT.  Inz also stated it is a basic function of the school district to meet state requirements for instructional hours and days.

Director Kimberly Caprini was the last director to speak before the board voted on whether to end discussion on the calendar resolution.  “I would be failing my advocacy for education if I didn’t follow the law and vote yes for this contract. I don’t want children to walk away from this thinking there aren’t consequences to their choices,” Caprini said. “That doesn’t mean they made a poor choice in striking. That doesn’t mean that at all.” At this point an audience member shouts what sounds like “You’re punishing us!” Caprini responds, “Nope. No, personally I’m not punishing anyone.”

Audience members continued to shout but Caprini continued.  “There are students short of credits that desperately want to graduate. We owe them that. We owe them that,” she said. “Enough. We owe them the opportunity to finish high school. The thought that we would actually be having a conversation about not following the law, the statute, is ridiculous.”

Caprini also acknowledged the staff, who aren’t in the MFT teacher or ESP chapters.

“I would like to believe that the other bargaining units, that have to be in a conversation about what it is that they are willing to do in order to extend this school year, are not going to fall to the wayside. They too care about their students,” Caprini said.

When Director Siad Ali called the question, Board Chair Ellison seemed confused. “Call the question” is a parliamentary move used to end debate on and bring a motion to an immediate vote. After what appeared to be a conversation with Director Jenny Arneson, Ellison asked the board to vote to end discussion on the resolution. As this was happening, the audience became louder. The board appeared to unanimously vote to end discussion of the resolution. Then, Ellison called for a vote on the calendar modification resolution. At this point in time, the protests were loud, but the resolution appeared to carry by a majority vote. Ellison immediately sent the meeting into recess.

It was at this point that audience members who identified themselves as students began shouting and using bullhorns to protest the modifications. Students  used a term for bovine feces and Graff got up and left the room, explaining he will not remain present if profanity is being used. The students voiced concerns about the impact the calendar changes will have on their plans for summer vacations, summer jobs and after-school jobs. They expressed frustration that they feel their perspective is being ignored.

After the meeting returned from recess, the protest continued. Ali attempted to deescalate the situation by offering the three people leading the protests an opportunity to speak. Ali asked them what their intentions were with their protest. When Ali reminded  the students that the resolution had already passed, Ellison disagreed with his assessment of the vote. Ali asked Inz, the board clerk, to clarify. Ellision asked for a roll call vote so that the record was clear who was voting which way. Inz led the vote over the audience shouting.

Directors Ira Jourdain and Adrianna Cerillo voted no on the calendar modification resolution and El-Amin abstained. Cerillo and El-Amin then walked out of the board meeting. The roll call continued, with Ali, Inz, Caprini, Arneson and Ellison all voting in favor of the resolution to modify the calendar.

The resolution passed by a vote of 5-2 with one abstention.