SW Voices Voter Guide: Board of Estimate and Taxation 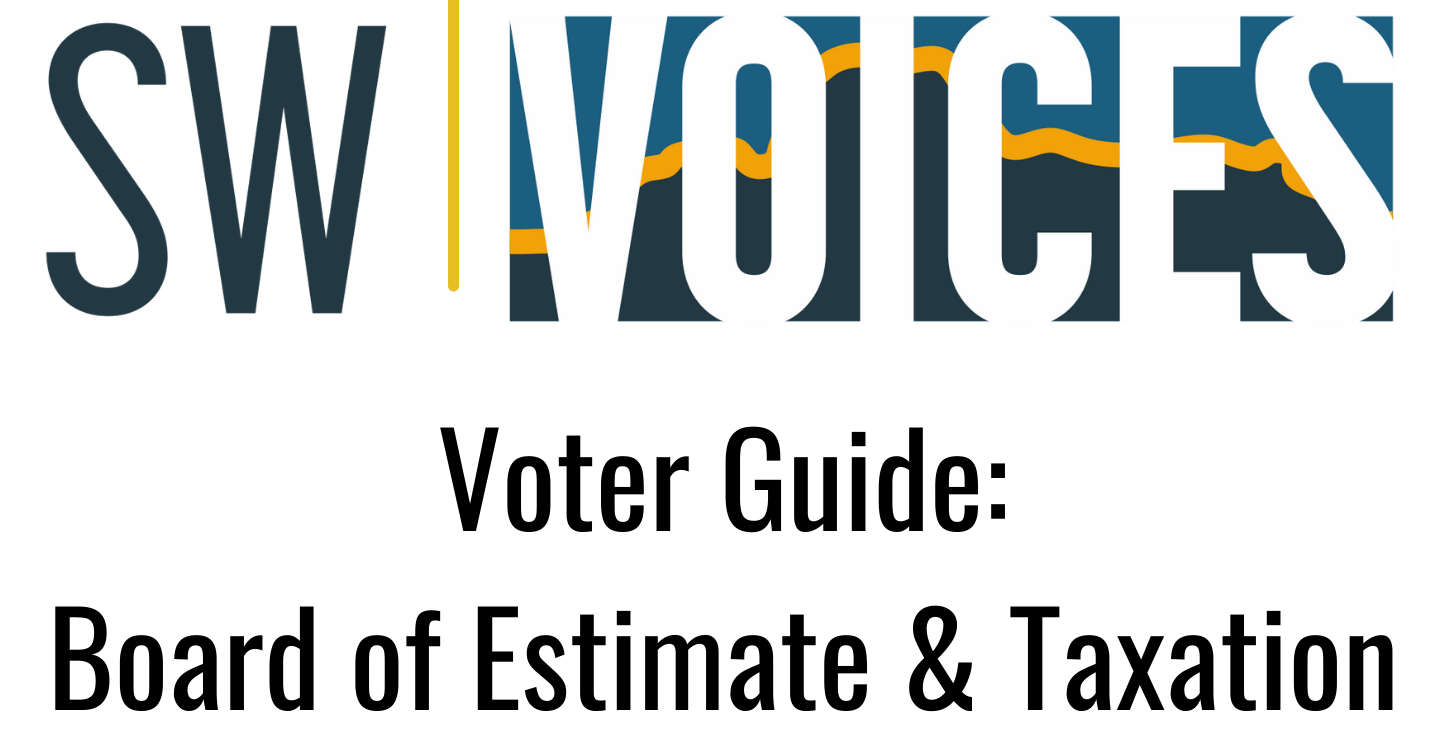 Do you care about how the city collects and spends your taxes? If so, then you should care about the Board of Estimate and Taxation (BET).

The BET's main function is to set the maximum tax levy for the year, which basically means that they put a ceiling on certain taxes, funding for the budget, and any programs the Mayor, Council, and Park Board want to fund. They also help the city borrow money by approving municipal bonds, where the city borrows from future revenue for current expenses. They do a variety of other things you can read about on the city's website here, but that's the crux of it. In short, they're a very important body that helps dictate how much money the city raises and spends, but most people have no idea they even exist.

The BET is made up of the Mayor, two Councilmembers, one Park Board member, and two people that are directly elected to serve on the board. This is where you come in!

You get to pick your two BET representatives. Pretty exciting now that you know what they do, eh? There are four candidates for BET this year (in alphabetical order by last name): Steve Brandt, Kevin Nikiforakis, Sam Pree-Stinson, and Pine Salica. Their answers to a few questions we asked them are below.

What motivated you to run for the Board of Estimate and Taxation?

As a Strib reporter I covered City Hall and studied the city budget, reading all 500-plus pages and asking countless questions to master details. When I retired, it seemed like a shame to not put that knowledge to public benefit. Both incumbents urged me to run. So I did.

I have much deeper understanding of city finances, and I know how City Hall works. I also know what powers the board has, and those it doesn’t. I’ve spent five years on the city’s capital budgeting task force, so I know the projects for which the Board borrows money.

The board needs more detailed information about the impact of any given proposed level of property taxation--how many property owners will see their taxes rise and by how much. The board formerly got this information and it is invaluable in determining impact.

The two public members of the Board of Estimate and Taxation went for some 40 years without a pay raise. Earlier this year, their pay was raised from $35 per meeting to $4,800 per year.

It’s called the Board of Estimate and Taxation but nobody can tell me what it estimates. Given the board’s two powers, borrowing and property taxation, I’d like to rename the Board of Debts and Taxes.

Kevin has not responded to our requests for answers. We will add his comments in here if and when he does.

My background. I’ve served my country as a vet, have successfully built a CDFI, am a treasurer for 2 non profits, and have been a community consultant to help community micro businesses and co-operatives. My experience as a compliance auditor at Medtronic also gives me a unique lens into tracking outcomes and impact as it relates to decision making.

Our bonding process is flawed which is why we don’t have economic investment in our most diverse and marginalized communities. In addition, community engagement has not happened which is why most voters engaged don’t know what this seat is or how it functions. We also need performance auditing to track the efficacy of our decision making.

Honestly, that it exists!

Changing the way we engage and developing an actual process so that we can be held accountable. We should have an office and community office hours too.

SP-USA, Green Party, Our Revolution, CM Cam Gordon, and most importantly, a diverse coalition of support from the people!

What motivated you to run for the Board of Estimate and Taxation?

I lived in this city, on Lake Street, through 2020. I witnessed firsthand what we are, and where we can do better. I moved from being campaign manager for my wife’s run for BET to a candidate when she accepted an offer to become an Administrative Law Judge two days before filing for the office closed. I stepped up to fill the opening!

Others are concerned with maintaining the broken status quo or having an overbroad idea of what the Board can actually do. I’m interested in exploring our ability as a city to live truer to our stated goals. We have untapped potential, and I’m excited to see what we can do.

I want to have public testimony be a part of the budget process, and intentionally be inclusive about it.

For 12 years, the incumbents Carol Becker and David Wheeler have sat on the board. They're both stepping down this year, which makes it an exciting open field with a chance to change the direction of the city.

I want to examine what other things we can bond for at the city level. Instead of bonding for parking ramps and stadiums downtown, how can we bond for improvements in other areas of the city?

Since I entered the race late, I missed the opportunity to get organizational endorsements, but I am endorsed by two BET members, Jono Cowgill, Park Board President, and Lisa Bender, City Council President. On the media side, I’m Wedge Live! endorsed.