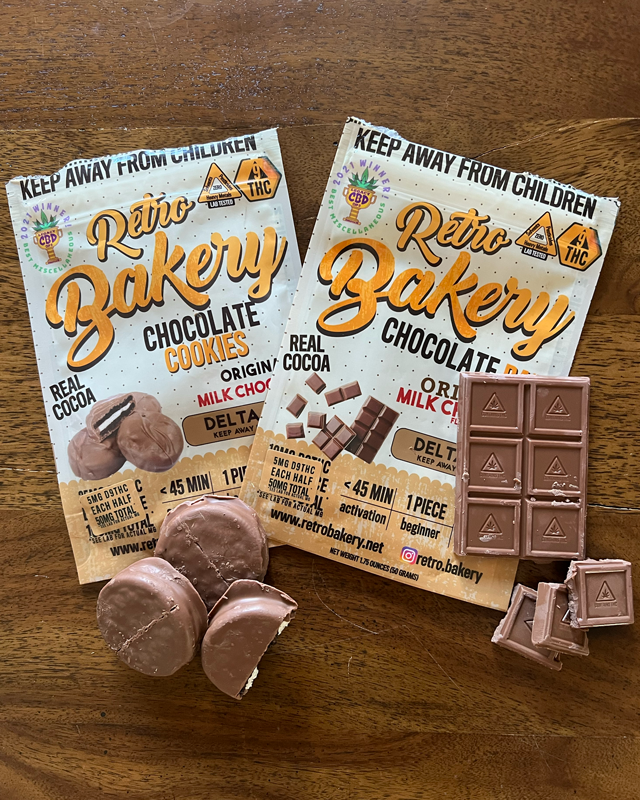 Retro Bakery delta-9 products that are now legal in Minnesota

Back in May most of the talk surrounding the state legislature was about the possibility of a special session, but we should have been paying more attention to an under the radar bill that effectively legalized marijuana edibles in Minnesota. Sort of…

Did Republicans in the state legislature “accidentally” legalize edibles?

An overwhelming majority of Americans, and most Minnesotans, already support adult use cannabis legalization. This new law doesn’t go as far as states like Colorado or Michigan, but it does allow for hemp-derived THC (the psychoactive compound found in Marijuana) to be sold as edibles.

The bill was initially framed as a way to better regulate delta-8 products (a hemp derived “cousin” of marijuana, which to this point has been essentially unregulated), but the language in HF 3595 leaves just enough room for the more psychoactive delta-9 to be available to those 21 and older in the form of 5 mg edibles.

While jokes have been made about Republicans “accidentally legalizing edibles,” the reality is that most of them seemed to know what this bill would do. In a divided statehouse, it’s not possible to get something like this passed without at least some support from the Minnesota GOP (as much as the DFL would like to take all the credit).

Among the Republicans who moved the bill forward, only Jim Abeler (R-Anoka County) has publicly claimed to not understand the full scope of the law he voted for. His political calculation seems to be that constituents in the northern exurbs consider being incompetent as better than being in support of legal weed.

Even those who are supportive of the partial legalization have been critical of what the law doesn’t include. Unlike in states where cannabis is legal and heavily regulated, in Minnesota you don’t even need a special license to sell THC edibles. There are also no special taxes levied on the products being sold (which seems to forego tens of millions in potential tax revenue). There’s also no provision to expunge criminal convictions for Minnesotans currently imprisoned for cannabis related offenses (something that has historically had a disproportionately negative impact on Black Minnesotans). The main author of the bill, Rep. Heather Edelson (D – Edina), acknowledged this to some extent on Friday in a tweet saying, “[w]e still have work to do but - You're welcome, Minnesota!”

Things to know about the newly legalized THC edibles in Minnesota

The new law doesn’t require a license to sell edibles, only that the purchaser be 21 or older, but that doesn’t mean they’re easy to find. A handful of smoke shops and smaller convenience stores offered delta-9 products right away, but availability has been inconsistent at best. Hypothetically, we could start to see products available everywhere soon, but to this point it’s a bit like trying to buy toilet paper in the spring of 2020. We were able to find some Retro Bakery THC edibles at Legacy Glassworks on Lyndale in Minneapolis on Friday morning but no promises they have any in stock after this weekend.

Even though the serving size was capped at 5mg (as the new law requires), it came in 10 serving packs (50mg). There’s no limit on how many packages you can buy or how many servings you can consume at a time. While 5 mg serving sizes have been called “the 3.2 beer of weed” that’s not really the case. It’s more like if full strength beer was legally required to be sold in smaller bottles but those bottles would still come in larger packages, with no limit on how many you could buy. This is still hemp-derived THC, just in a smaller bite.

If you’re interested in giving it a try but don’t have much experience with edibles, you might consider easing into it. With how new the products are, and how little regulation exists in the marketplace at this point, you might end up with significant variability in terms of potency from product to product.

Even in our sampling we noticed that the chocolate covered cookies produced a considerably milder high than the chocolate bars did. We tested each multiple times to be sure, for research purposes.

The labels on our packaging suggested one 5 mg piece for a “beginner” and two for “advanced” users. True cannabis novices might even break that 5 mg piece in half to start. See how you feel after a couple hours and then recalibrate your serving size from there. Make sure you don’t play the fool’s game of doubling your dosage too early, because getting too high on edibles is not a fun experience.

Nobody has ever died from cannabis overconsumption, but the cognitive overstimulation in that frame of mind can be a bit like being trapped inside a haunted house. The high only tends to last a couple of hours (give or take) and the only noticeable side effects from our testing period was a bit of mild grogginess after the fact.

While the Retro Bakery cookies were delicious (chocolate covered Oreo style cookies that were similar to what you might find someplace like Kowalski’s), the high was suboptimal. The best product we tried was the dark chocolate bar. Neither overly sweet nor too bitter, a hint of sea salt, and a very mild cannabis note at the end. Give it a try about 45 minutes before you watch your next movie or take your next walk around the lake.