The Hockey Parents of Minneapolis 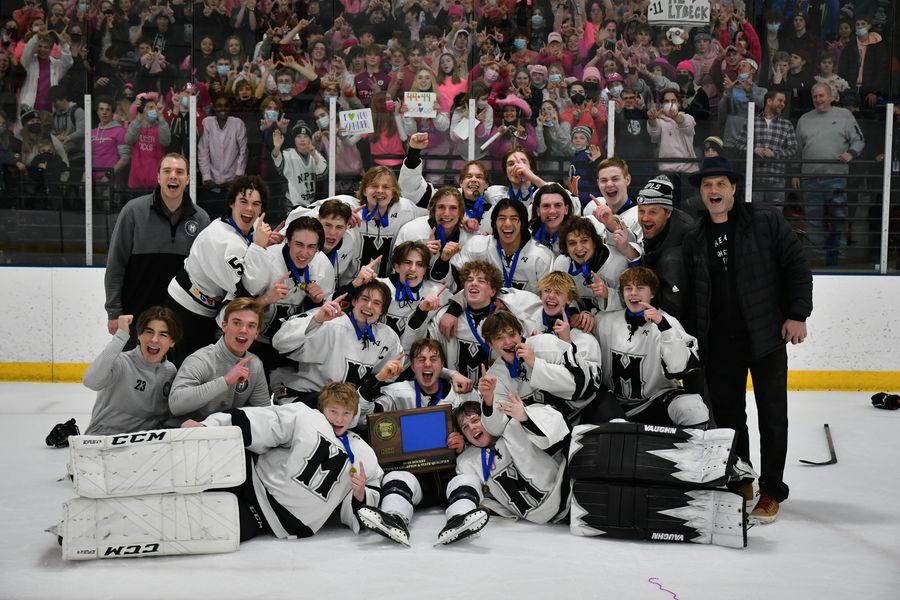 Minneapolis high school hockey teams aren’t supposed to go to the state tournament. So, when the combined Minneapolis team won the section final last week, we did what any nosy adults would do when a group of kids breaks the rules – we called their parents.

They’ll open up the first tournament bid for a Minneapolis Public School team since 1994 tonight at 8 p.m. against Alexandria at the Xcel Energy Center (tickets are still available for the Class A quarterfinals here). The varsity team has representation from Southwest, Washburn, South, and Edison, with aspirations to draw from all seven of the city’s high schools in the next couple years (the cheer team, meanwhile, has members from six of the seven).

We chatted with the parents of the team’s captains, Senior forward Jack Hanson (Washburn), Senior center Zander Zoia (Southwest), and Junior defenseman Drew Pitts (Southwest) this week. Their boys started playing together when Drew (the youngest) was six, and while they weren’t always on the same team, they worked their way through the Minneapolis Storm youth hockey program together. The parents have watched them digest hard losses and celebrate big wins together for more than a decade.

While they have this history, things really got serious for them around this time last year. “It all started in the spring. Jack looked me in the eyes and told me they were going to state,” said Brad Hanson, Jack’s dad and a Washburn alum who says he and his wife Erin not-so-subtly pushed their kids, including Jack’s younger brother, Joel, a junior defenseman, to become Millers.

That mentality filtered down to the rest of the team. They got to work. “They were training harder than they ever would have previously, or that you ever would’ve seen six or seven years ago. You get that core critical three or four kids, and then you just build on that,” said Jeff Pitts, Drew’s dad. “It helped that they all took that leap together. I don’t know that Drew would’ve been excited to stay if Joel or Jack or Zander had left.”

Heidi Weaver, Zander’s mom, was quick to mention the star players of Minneapolis teams in the past, like Frank Lingren, Ben Murray, and Jake Hale, that paved the way for their kids.  But this year, their depth has pulled them through. The parents saw their kids working all summer, and saw the younger members of the team following their lead. “It created a flywheel effect. Kids were saying ‘I’m working my tail off to make it to state,’” said Mark Zoia, Zander’s dad. The team now has a group of Sophomores that have been major contributors to the state tournament run.

The parents emphasize that the three boys have very different personalities, which is one of the things that makes them tick. “They all really love hockey, and that brings them together. After the games, they're hugging and really enjoy being around each other. Different high schools, different circles, but the kids and the parents feel really connected to the hockey community," said Sarah Pitts, Drew’s mom.

These experiences have benefitted them in others ways, like the special relationship the parents say the captains have with Alex Lamont, team’s goalie. He’s played every single game this year, and “Each one of the boys has a different routine with him. Each kid has a tight tie with him,” said Mark Zoia. He came up big in the Section Final, making several important saves and holding Delano to a single goal.

One of the big themes they mentioned is what the team might mean to the city’s younger hockey players: “Our hope is that this helps keep kids in the city and in the program,” said Mark Zoia. Zander went and spoke to a group of Pee Wee hockey players in the city the other day, and it didn’t hurt to have Jack Hanson named to the All-Metro Third Team yesterday. “To have Jack's name in the paper, that's a really big deal. People can get there through this Minneapolis program,” Mark Zoia added.

Head Coach Joe Dziedzic, an Edison grad and one of the most accomplished Minneapolis hockey players of all-time, was clearly a motivating factor for keeping the kids in the city to play. To a person, the parents cited his leadership and experience as a major reason their kids embraced the hockey program.

“Going to public school in Minneapolis while our kids have been there has been hard. The CDD has been hard on kids, changing around their school communities. The teachers strike. Our kids are out of school for I don’t know how long. COVID! But Drew wanted to play for Joe. Having strong leadership at the head of the program was key. He also didn’t want to leave his buddies.” said Sarah Pitts.

Last year was a really difficult one for their kids. “COVID really took down the whole season last year. They were taken out for two weeks because of an exposure to another team. They found out an hour before a game. No spectators all year at Parade [Ice Garden]. Players wore masks on the ice all season. We are so grateful they had a full season this year. On top of that, they made State?! It’s thrilling,” said Heidi Weaver.

If there was a silver lining last year, it was the changes the parents had to make to their gameday routine. No fans in the stands meant the parents couldn’t watch their kids, so they setup a livestream to see the games. After some tinkering, a GoFundMe, and many hours of labor from Mark to get it going they’re broadcasting across the country to grandparents, family, friends of friends, and even writers from a local news outlet that showed up an hour before the Section Final only to discover it was already sold out (only in Minnesota). Mark’s famous “shout-outs” on the broadcast have become a fan favorite.

Keep your eyes peeled for signs of support for the kids around the city today. From the Rabbit along Minnehaha Creek to black-and-white colored lights downtown, it’ll be tough to miss. The team has already gotten further than many people thought was possible. If self-belief and hard work can get you through, this team might have a shot to do something special in the next few days. But no matter what happens in St. Paul, it’s clear they already have.