Keep yours eyes open and slightly above eye level to spot the clay creatures hidden around the neighborhood. 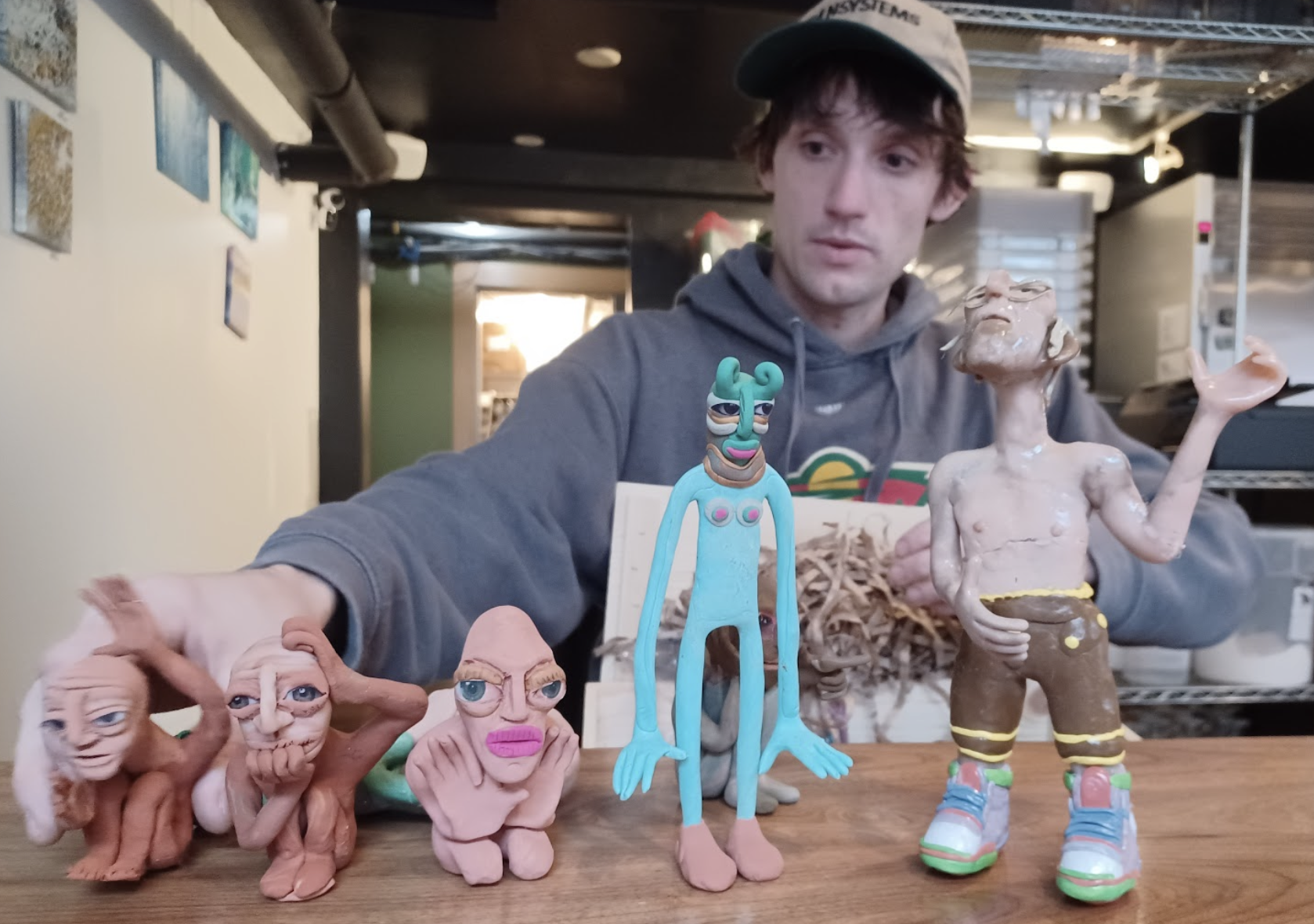 Shane Davis sets up some of the little clay figures he’s made at Boiler Room Coffee. Photo by Anna Koenning.

When longtime Stevens Square-Loring Heights resident Maureen Wells noticed a couple weird little clay figurines on her balcony one day last summer, she took a picture and uploaded it to Facebook.

One of Wells’ friends in the neighborhood noticed more, similar figures decorating the alleys of Stevens Square-Loring Heights. Wells had to find the person who made them.

She asked the group of guys who hang out and grill in the alley between Second and Third avenues if they knew who made the figures that lined the windowsills behind them. The building the guys grilled behind was swarmed with the little clay monsters.

They told her about Shane, the lanky, chatty guy who made the figures and hid them around the neighborhood, but nobody had his contact information. She gave one of the neighborhood guys her phone number in case they came across Shane.

The summer after the COVID-19 pandemic started, Davis got to know the group of guys who grill behind their building. He learned that they reuse a communal fire poking stick, which they set on the windowsill behind the building when not in use. An older man named Larry, who has since died, was in charge of the poking stick.

“Larry was a really nice older man, but we had a kind of antagonistic relationship, and rightfully so,” Davis said. “He looked at me sometimes like I was a wingnut, which I was.”

Davis got to thinking about messing with Larry.

“I was like, ‘it’d be funny if Larry goes to reach for his little communal fire poking stick and a little weird monster guy was holding it,’” he said.

Naturally, he went to the old dollar store in Stevens Square-Loring Heights and bought some clay, crafted a little weird monster guy and set it on the windowsill with the fire poker in its hands.

The hobby exploded from there– Davis estimated that he’s made and hidden hundreds of little clay guys across the neighborhood. He calls it “exterior decorating without permission.”

“It’s not like vandalism as much as trying to decorate outside,” he said.

Wells, who finally met Davis through the guys who grill out back, calls it “a random act of art.”

After the initial clay guy holding the fire poker, one of Davis’ friends in the neighborhood bought him some clay to continue making the little monsters. The support encouraged Davis to make more, and his apartment would’ve been overrun by little clay guys if he didn’t place them around the neighborhood.

Making the creatures is easy. During the hour and a half that we spoke, Davis fiddled with clay and produced a little guy by the end of our conversation. He’d already started on a head before we met, and he keeps eyes that he cuts out from magazines in a flat case that he keeps with his materials. After assembling the monster, all he has to do is bake the clay for a few minutes.

Once the clay is baked, Davis places the figures around the neighborhood. That first summer, he put most of them in easy-to-reach places. They disappeared quickly. Davis remembered one time he met a guy in the alley who invited him into his apartment.

“I couldn’t even tell if he was living there or squatting there, but he had like 12 of my things in there,” he said.

Davis asked the man about the figures, to which the guy responded “oh I just find these guys around and I don’t know what’s going on, I just figured I’d keep them.” This response prompted Davis to explain that he made them, and he took half of them to put back in the neighborhood.

Once Davis started hiding them in harder-to-reach places, he’d ask neighbors to boost him or “borrow” a ladder he saw lying around. He put more figures in Stevens Square Park when he knew that there was an event in the park the following day. He chose Wells’ condo because the blue pots on her balcony reminded him of the French Quarter, inspiring him to make blue creatures to match. Sometimes people saw him sneaking around at night and thought he was up to something shady.

“There have been times when people have seen me coming out of spaces in between buildings or whatever and hiding little guys and they’ll be like ‘hey you, what are you doing over there?’ And I’m just hiding little clay guys around,” Davis said. “All the anger goes away and I’m like ‘now that I say it out loud I’m weirded out too.’”

While the little guys go missing frequently and occasionally fall off their ledges and lose a head or limb, Davis revealed  several of his hiding spots around Stevens Square-Loring Heights where the clay monsters have persevered. When we walked out of Boiler Room Coffee after our conversation, he pointed out a couple sitting right above the entrance to the coffee shop.

While he doesn’t live in the neighborhood anymore, Davis still makes the little guys and drops them off every couple weeks. A neighbor named Mark lets Davis use his oven to bake the little creatures. Davis said he knocks on Mark’s door and tells him he needs the oven “for nothing nefarious.” The new set-up works great for Davis.

He finds it funny that he still makes little guys while his girlfriend is pregnant with a real little guy. Being a new dad won’t interrupt his hobby, Davis thinks.

“I’m sitting out there making little guys and it’s like ‘oh I hear you have another one on the way,’” he said.

His girlfriend is supportive of the little clay guys, although her parents thought it was odd that Davis cut the eyes out of their magazines while they stayed with them between homes. He made a few little creatures and placed them around his girlfriend’s parents’ neighborhood during that period, along the route where his girlfriend walks the dog.

“I was hoping that she would walk by and see one and just be like ‘oh God, it’s happening here now,’” he said.

Davis brought two boxes with ten to fifteen little creatures to our conversation at Boiler Room. After we left the coffee shop, he set off into the dark to place more little weird monster guys around the neighborhood. 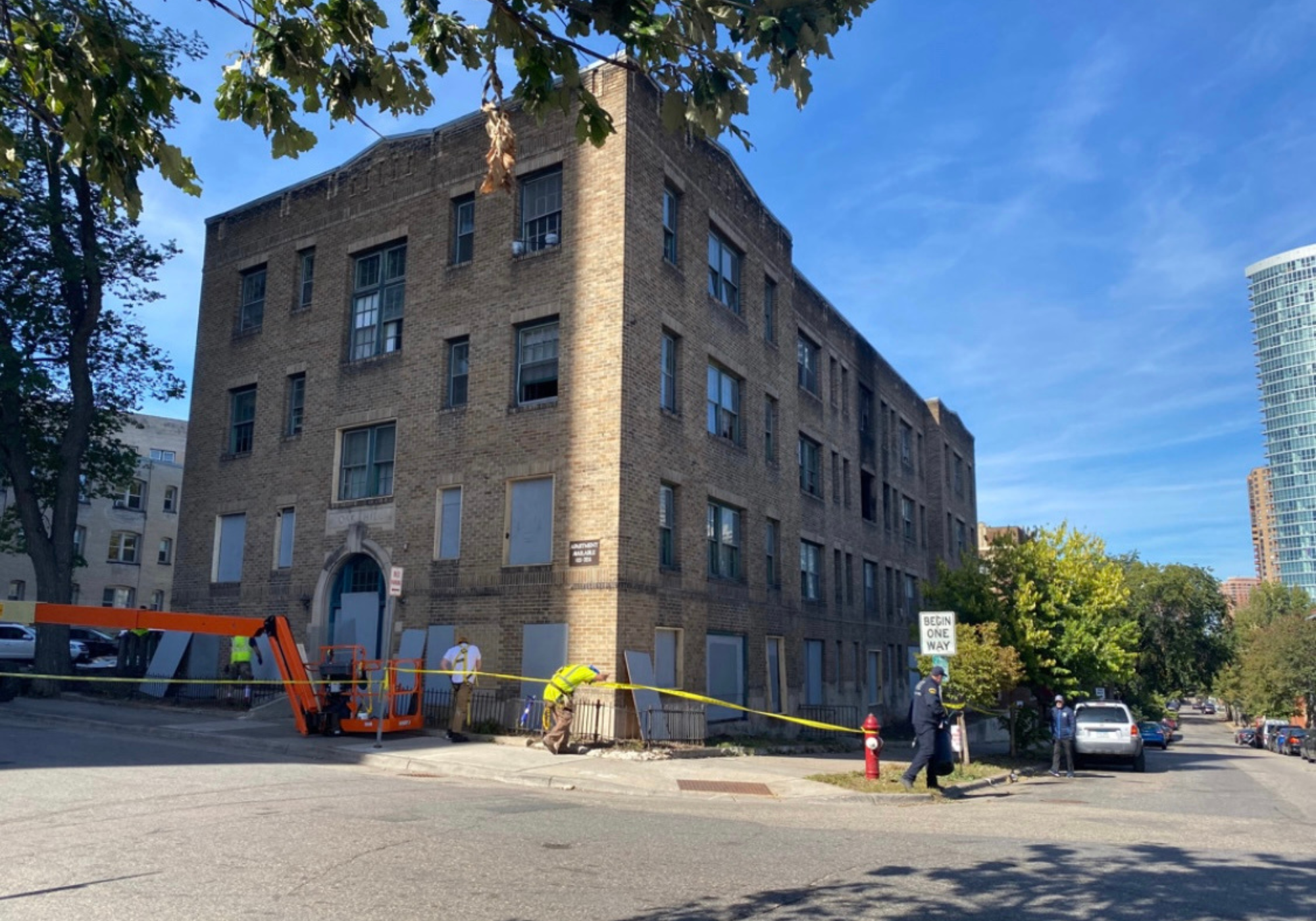 One landlord, hundreds of violations