Three years after an off-duty police work audit, what has changed? 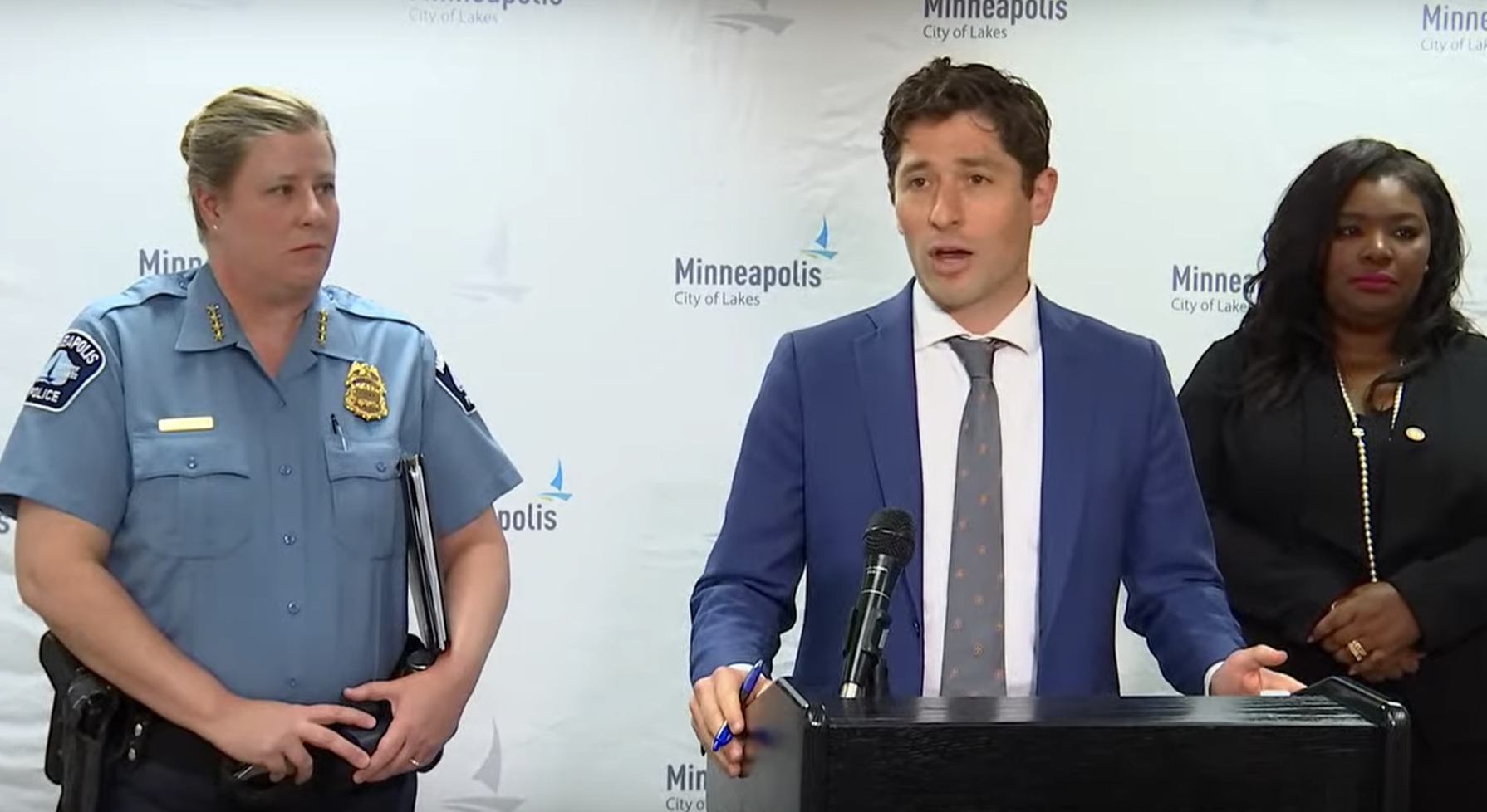 When Ward 13 City Councilmember Linea Palmisano convened a work group in early 2020 after a city audit on off-duty policing was released, a police officer brought her an old piece of paper found in a cabinet in City Hall.

It was from a workgroup convened decades ago about Minneapolis Police Department’s off-duty work policy.

In a 1997 injunction filed by the Minneapolis Police Department union, the union asserted the department, not the city, had the right to restrict off-duty work for its officers. In negotiations at the time, the City agreed that officers can contract private services during off-duty hours “subject to reasonable restrictions” that advance the department’s “legitimate interests.”

In 2017, criticism of off-duty work sparked again after former MPD Officer Mohamed Noor killed Justine Damond when he was fresh off a seven-hour off-duty shift.

In 2019, Palmisano called for an audit for off-duty police work.

In 2020, Minneapolis underwent a seismic cultural shift after the murder of George Floyd by former MPD Officer Derek Chauvin and the civil unrest that followed.

Over the last two years, a noticeable culture shift has happened within the MPD and with its relationship to Minneapolis residents. MPD officers have filed PTSD claims that add up to over $20 million. The department is down to about 550 sworn officers, compared to about 900 in 2019. Residents have started noticing a slow down in basic police services. In recent months, social media posts and news stories have cropped up showing empty squad cars on Nicollet Mall, police guarding construction sites, and a surge of available officers during encampment clearances.

This well-documented shift in MPD’s work culture is driving questions about what an officer’s work day looks like. Because, despite the force being down almost half its workforce, MPD officers continue to do off-duty work for private businesses.

Two years ago, an opinion piece published by the Minnesota Reformer called attention to the abusive system of off-duty police work in the city. In the article, the authors, small business owners, write, "One way we can do our part to support a reimagining of community safety in the private sector is to shine a light on the off-duty roles police officers play as private contractors — and how that system is abusive."

In that piece, co-authors Kevin Brown and KB Brown, no relation, argue that officers work too many off-duty shifts, the City is liable for problems during those shifts, and taxpayers foot the bill for the uniforms and squad cars officers used during their off-duty work. Both authors are members of the Main Street Alliance of Minnesota.

The policy allowing police to use City equipment while off-duty was approved in 2013, according to an article from the Southwest Journal.

“They’re basically paid mercenaries” during their off-duty work,” Kevin Brown said in a recent phone interview. “They're there to enforce whatever sort of laws they want or don't want to enforce at the behest of private property owners.”

Given the current public scrutiny over off-duty policing and the 2019 audit spearheaded by Palmisano, has there been any progress made to address officers taking on off-duty work, especially considering the current staffing crisis?

The short answer is: kind of. But first, let’s look at what the 2019 audit found.

“While police off-duty work provides many benefits to the City, there are also associated risks that must be adequately managed,” the audit report reads.

The off-duty work audit group met only a few times before the pandemic lockdown and never reconvened.

Former MPD Officer Derek Chauvin, a known ringleader for organizing off-duty work, was hit with tax evasion charges that showed he made $96,000 in a five-year span from El Nuevo Rodeo, a building where he and Floyd both worked security. Chauvin often got a cut of the pay for helping to schedule off-duty work for other officers.

Then, in 2021, more bad press: Minnesota Reformer reported that officers were still raking in tons of overtime income.

It wasn’t until June of this year that Interim Police Chief Amelia Huffman and Mayor Jacob Frey held a press conference announcing a cap on the total number of hours an officer can work a day, including off-duty work. This cap addresses one of the high importance audit findings: off-duty work policy requirements needed to be strengthened.

“[Officers] need the ability to recalibrate between some of these very difficult calls,” Frey said at the press conference. “We want to make sure they’re at their very best. This new limitation will make sure officers have that necessary time to rest and recuperate.”

The cap was set at 16 hours a day and 74 hours a week. The policy went into effect in May, a month before the press conference. At the press conference, the department announced it was hiring a health and wellness manager, a job that is still listed online.

“Amelia Huffman, even though she hadn't been part of this workgroup when she became chief, she really understood this as being important,” Palmisano said. “She probably made the most progress when she picked it up and moved forward a plan and continues conversations with the [police] federation about it.”

Huffman has made more headway with the union “than any police chief I have worked with on police reforms,” Palmisano said in a follow-up email.

Another scheduling limit discussed at the press conference requires officers to take eight consecutive hours off the clock for every 24 hours on, plus a full 24 hours off without work a week.

“We had approached this off-duty work effort from a risk perspective to the public, but also from a health and wellness perspective for officers,” Palmisano said.

The City of Minneapolis no longer requires businesses to hire a minimum number of off-duty officers for events. Businesses and event planners are required to show the city a safety plan that takes a more holistic approach to event planning.

Palmisano said there are still improvements that can be made. Palmisano couldn’t provide evidence that the audit findings were being addressed by the MPD, sans the off-duty work hours cap, and MPD did not respond to multiple requests for comment.

Palmisano said the union contract is at the core of the decades-old issue with the off-duty work policy. The city “bargained away our management rights to a police federation, essentially because we couldn’t pay them more.  And now we want those rights back, and it’s extremely difficult to unwind,” she said in an email.

Union contract negotiations are currently underway and Palmisano said she’s heard mixed feelings from the federation about addressing off-duty work. The union is protective of letting officers do off-duty work, but sometimes off-duty work can be cliquey and junior officers are boxed out from working security at Twins or Vikings games, Palmisano said.

The issue of off-duty policing came up during a committee meeting on October 26 as councilmembers interviewed then-police chief nominee, Brian O’Hara. O’Hara was sworn in on November 7.

On October 26, O’Hara said he had just recently learned that there wasn’t a clear policy about off-duty work “and that’s definitely a concern,” but he wasn’t sure about the role of the union contract in off-duty work.

In Newark, New Jersey, where he helped usher in a new era of policing, city leadership has to sign off for officers to take off-duty jobs and officers are required to submit financial records so the city is privy to conflicts of interest.

Todd Schuman, a Southwest resident, said he believes the city’s follow-through on audits is “notoriously bad.” Schuman was a neighbor of Damond’s and is the spokesperson for the Justice for Justine coalition, which formed after her death.

Schuman said he is concerned that police can work 60-plus hours a week during a police shortage.

“It's weird that there are any off-duty shifts when we're down 300 officers…those resources should be dedicated to public safety for the residents of the city and not for corporate security or business security,” Schuman said.

Schuman said he hopes a tightening of off-duty policies makes its way into the police union contract negotiations, because “from the outside looking in,” it seems like the city has “little control over what happens for the rank-and-file officers.”

To Schuman, this is a great opportunity to make policy changes and “make a clear stance that tired officers make mistakes.”

Palmisano and her staff interviewed officers around the time of the workgroup, with officers saying the off-duty work is a “community multiplier.” It allows them to interact with neighbors. Palmisano said that officers take their off-duty work just as seriously as their on-duty work. The interviews also found that their biggest motivator for off-duty work was to pull in supplemental income.

“We are committed to moving this work forward,” Palmisano said.