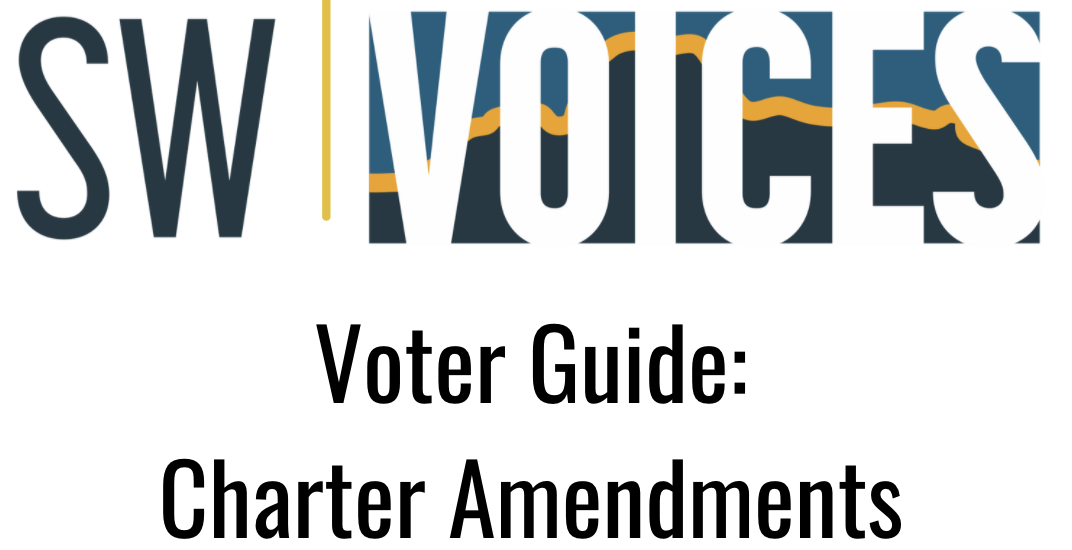 Putting together this section of our voter guide was difficult because of the tenor of the debate around the charter amendments this year.

Because so much of the political battle has turned into a fight over what the words in the ballot amendment mean, rather than the merits of voting in either direction, even sitting down to write a factual guide to this will be seen by some as a political act. That’s ok! Many of you told us you needed a plain-language guide to the charter amendments, and we’re here to try to get you the facts about what you’re voting on. In this case, what each of the ballot amendments will actually do can be a bit complicated, and lots of people are working overtime to mislead and bend the meaning of what these are about, but we tried to break it down in a simple way as best we can. We also linked you to some of our favorite guides to each of these that have been published elsewhere.

What is a charter, and why am I being asked to vote on it?

Minneapolis is governed by a charter. The charter is basically a "constitution" for the city, but certain provisions can only be changed by getting tens of thousands of signatures in support of adding it to the ballot and winning a public vote, or by going through the charter commission, which is a group of appointees that has taken a very active role in shaping the charter amendments this year.

The simplest way to think about it is that you’ll be voting to change the city’s constitution. Therein lies one of the only recommendations that will appear in here – it takes a LOT of work to change the charter, so vote knowing that the changes we vote for will likely last for a long time, rather than just thinking about this as changes that will last for the next couple of years, the next Council, and the next Mayor.

What are we being asked to change?

What you’ll see on the ballot: “Shall the Minneapolis City Charter be amended to adopt a change in its form of government to an Executive Mayor-Legislative Council structure to shift certain powers to the Mayor, consolidating administrative authority over all operating departments under the Mayor, and eliminating the Executive Committee?”

Minneapolis currently has a “weak mayor” system, which means that the City Council has an especially large role in how the city is governed. An exception to this is the police department, where the Mayor is fully in charge of operations.

If approved, this amendment would shift power from the City Council to the Mayor. The next Mayor, and future Mayors, will have more power over the city’s operations than current and previous ones have had.

Proponents like this change, as it’ll streamline how the city functions and make it easier for Mayors to get things done. Opponents worry that it’ll give the Mayor too much power, and argue that having a strong Council serves as an important check on executive overreach or abuse.

St. Paul, and many other cities around the country, have a version of a strong mayor system. Minneapolis version of this system would go a bit further than St. Paul, giving the Mayor more discretionary power over the Council’s legislative authority than St. Paul’s Mayors have.

What you’ll see on the ballot: "Shall the Minneapolis City Charter be amended to remove the Police Department and replace it with a Department of Public Safety that employs a comprehensive public health approach to the delivery of functions by the Department of Public Safety, with those specific functions to be determined by the Mayor and City Council by ordinance; which will not be subject to exclusive mayoral power over its establishment, maintenance, and command; and which could include licensed peace officers (police officers), if necessary, to fulfill its responsibilities for public safety, with the general nature of the amendments being briefly indicated in the explanatory note below, which is made a part of this ballot?" [link to the explanatory note is here]

The much-discussed “public safety” amendment is getting more money and headlines than the others by a wide margin, and the main disagreement has been about what the ballot language actually means, not which side has the most merit.

First off, a couple things to get out of the way – despite what people with political agendas may tell you, this amendment does not abolish the police, it does not defund the police, and it does not even reform the police on its own.

The minimum staffing requirement is a critical piece of this initiative, because right now, Minneapolis required by law to “fund a police force of at least 0.0017 employees per resident, and provide for those employees' compensation, for which purpose it may tax the taxable property in the City up to 0.3 percent of its value annually.” This means that the city is required to have a minimum number of licensed police officers, and to raise taxes to fund that level of officers, and the City Council and the Mayor aren’t allowed to do anything about it. Right now, the city has about 588 officers – if this amendment fails, the city will be required to hire at least 100-150 officers by next summer (taking the city to at least 730 officers) after a judge ruled that the city had fallen out of compliance with the staffing language in the charter. The passage of this amendment does not preclude the next Mayor and Council from adding those 150 officers, or even adding more officers than that, they'll simply have to pass a new funding source to do so. Most cities, both across Minnesota and the country as a whole, do not have a minimum police staffing requirement in their charter, they simply plan and budget for the number of officers they think they need and legislate accordingly.

Whether this passes or not, the real issue is what happens afterwards. A “yes” vote will enable the next Council and Mayor to have more options about public safety, police staffing, and how to fund it. It will also give the next Council more power over the police department than they currently have. A “no” vote will force the city’s government to follow the letter of the law and keep the current public safety and police department structure in place. It will also keep the current structure of complete authority and oversight held by the Mayor in place.

What you'll see on the ballot: "Shall the Minneapolis City Charter be amended to authorize the City Council to regulate rents on private residential property in the City of Minneapolis, with the general nature of the amendments being indicated in the explanatory note below, which is made a part of this ballot?"

Recommended guides: Sahan Journal, U of M report on the impact of rent control on Minneapolis