Wage theft hurts us all 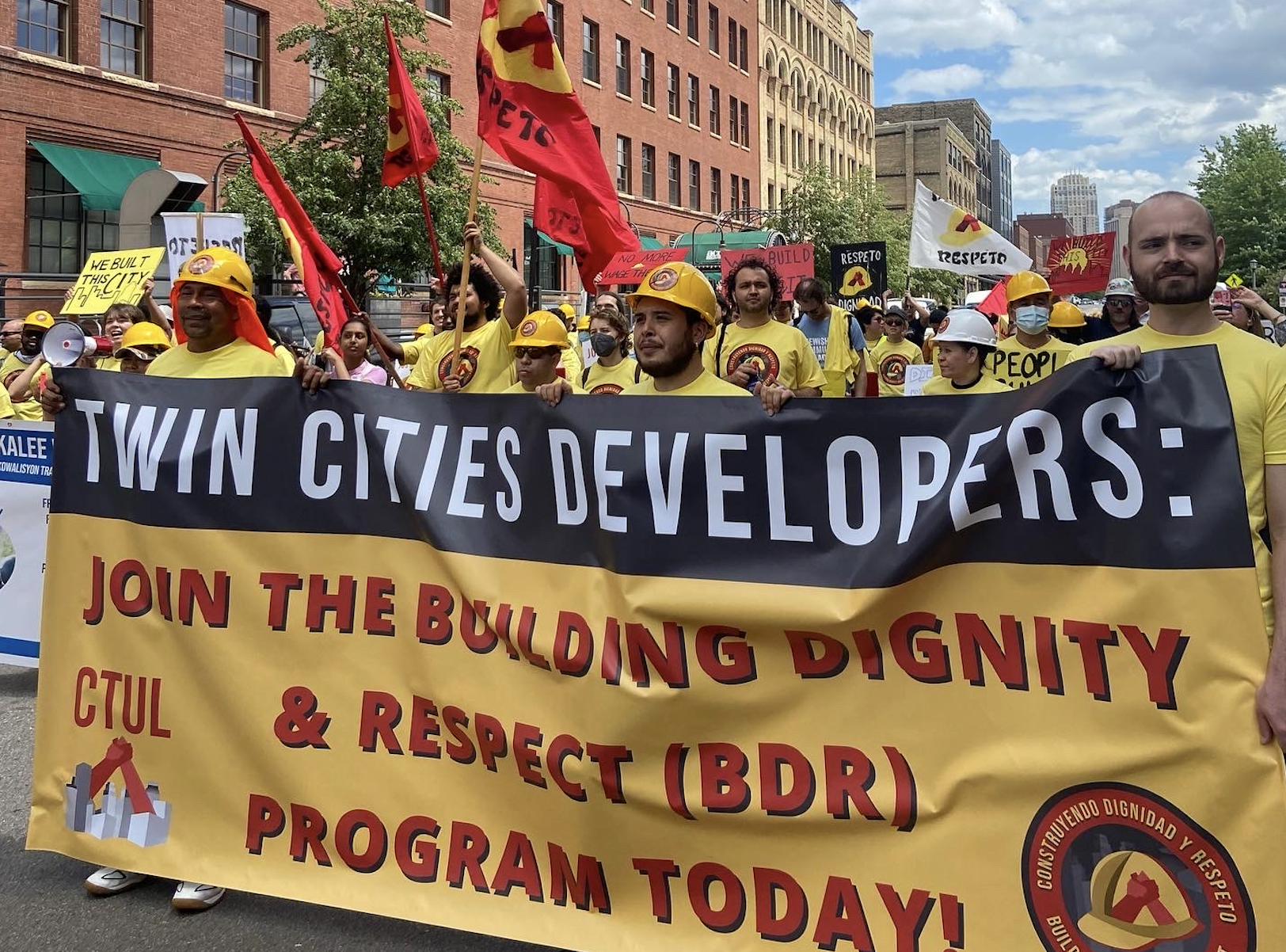 Construction workers who have experienced wage theft hold a banner during a CTUL march on June 16. Photo by Uche Iroegbu.

Though it may seem to be a distant problem for those of us who work from home or in office settings, the theft of the hard-earned wages of construction workers is cheating you, as well. Wage theft is cheating Minnesota taxpayers out of $136 million per year, to be specific.

While developers and contractors have taxpayers pick up the slack, they are also cheating Minnesotans out of more money being put into schools, infrastructure, and healthcare through state tax revenue. Though the tactics of failing to pay overtime and paying “under the table” are well-known, those outside of the industry may be unaware that employers of construction workers often take the more insidious route of misclassifying workers as independent contractors, at times without the employee being aware. This allows employers to bypass critical aspects of the Fair Labor Standards Act (FLSA) in order to avoid providing insurance and worker’s compensation to between 12% to 21% of construction workers.

One in four non-union construction workers reports not being paid their full wages. When construction workers aren’t paid their wages, they are then forced to seek out safety-net programs, additional employment, and help from friends and family all while working full-time jobs in one of the most important industries in the development of our communities. The need for public assistance also costs taxpayers $28 billion per year. Workers and their families bear the brunt of these shady tactics as well as taxpayers who subsidize construction companies that cut corners and cheat workers. While it’s crucial that safety-net programs are well-funded and accessible to those who need them, these programs should not be a means for developers and contractors to force taxpayers to pay for benefits that they should be providing to workers.

When construction workers have to pay rent or a mortgage and pay for heating in the dead of winter, it’s difficult to do anything but grit their teeth and bear it. Even when they do report wage theft, it is likely they will not get full back wages as the Department of Labor’s Wage and Hour Division doesn’t have enough resources to pursue the magnitude of these cases effectively. Wage theft costs workers $50 billion per year and outweighs the value stolen through other forms of theft. The businesses that cheat and steal from workers know that getting caught is a small consequence of stealing from those who suffer injuries, struggle to pay rising food and utility costs, find it increasingly difficult to pay rent or mortgages, and face more difficulties in providing for their families.

Businesses that do pay fair and living wages are undermined when other contractors and developers practice wage theft. As developers expect as high a return as possible, one way to make sure of that is to develop a project as cheaply as possible. However, this leads to the use of contractors that drive down costs, often through wage theft. And so the cycle of wage theft continues and is encouraged and incentivized, and fair businesses struggle to keep up.

This is not to mention that less money going into the pockets of ordinary workers also serves to undermine the necessary stimulus going through local businesses that are doing their best to recover from the COVID-19 pandemic.

Despite these systemic issues, construction workers often have to pursue action against their exploitation by themselves, and they often face illegal retaliation from their employers. As a result, workers seeking fair pay find it even harder to pay the bills they were already having trouble paying as their wages are stolen. All of this really calls into question what good the rules are when they are not enforced nearly enough and leave behind companies that compensate workers fairly.

In May of 2019, progress by our state government to counter wage theft was made through the Minnesota Wage Theft Prevention Act, which includes punishments of up to 20 years in prison and a fine of up to $100,000. The Minneapolis Wage Theft Prevention Ordinance also requires employers in Minneapolis to provide sick and safe time balances on all earnings statements along with a labor poster to new hires. However, these actions alone will not fully eliminate wage theft, especially in industries like construction where there are complicated layers of contractors and subcontractors that oversee workers. We cannot stop demanding accountability on all levels when wage theft is still occurring across industries. Workers' protections are only as strong as their enforcement, and businesses and tax-payers alike must support models of co-enforcement so that there are real consequences when companies steal from their workers.

The epidemic of wage theft in the construction industry provides a critical opportunity for developers and contractors to show they stand for the rights and dignity of workers, as displayed through the mission of organizations like the Building Dignity and Respect Standards Council (BDC). Through the legally-binding agreement set up by BDC, developers contribute to the education and advancement of workers and commit to only hiring contractors that agree to abide by a Code of Conduct that protects workers’ rights, among many other aspects critical to creating and maintaining fair competition and security for construction workers. In times that have never been more unsure and volatile, the least taxpayers can do is encourage organizations and agreements that provide some stability and peace of mind. We have footed the bill for theft for far too long, and we must demand those at fault know that we refuse to continue doing so. We literally cannot afford it.