"We definitely found out that parks are essential services." An Interview with Park Board President Meg Forney

An Interview with Park Board President Meg Forney 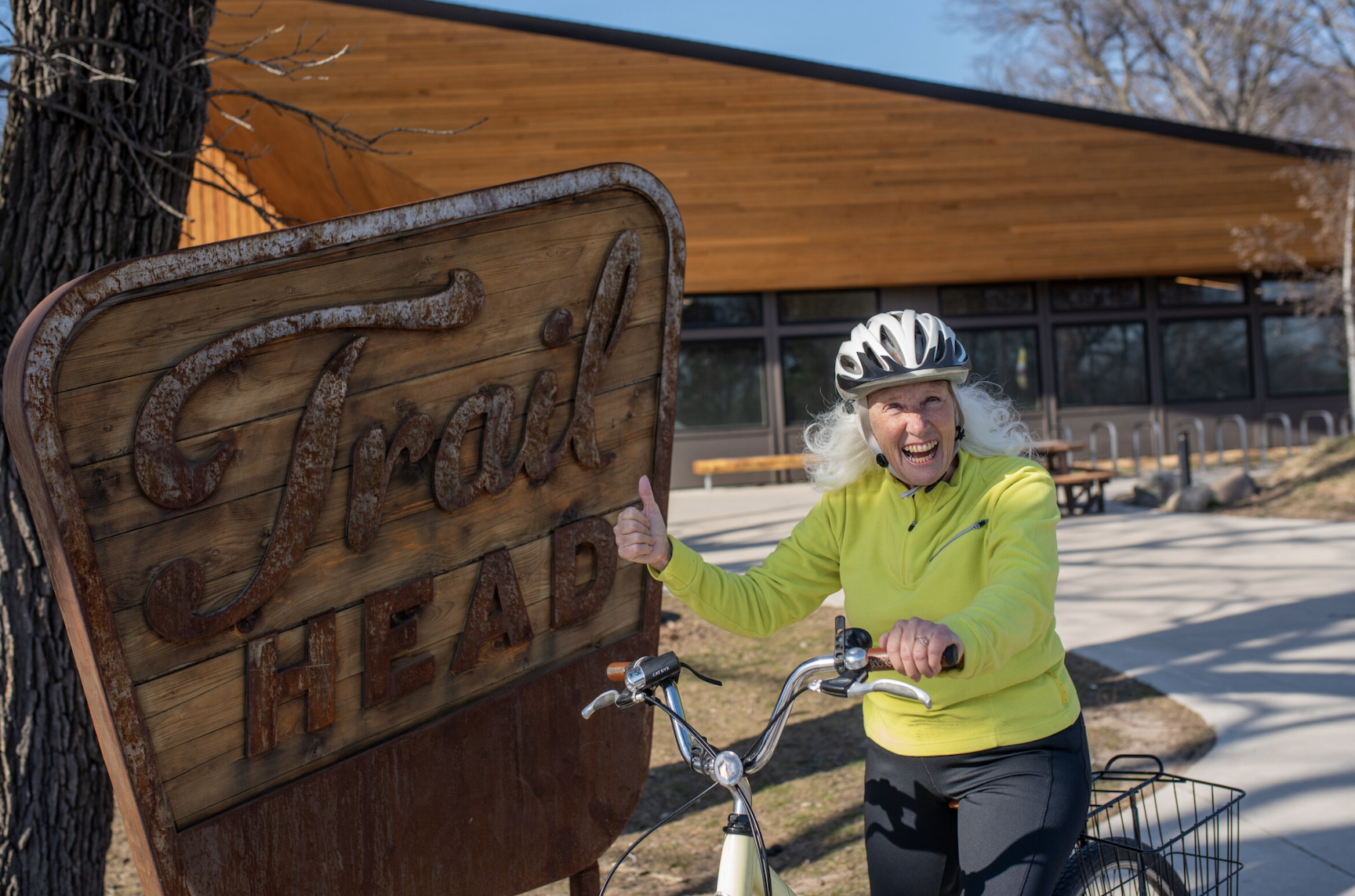 This piece is part of our series of interviews with local elected officials, which you can read here. Most recently, we interviewed former Park Board President Jono Cowgill.

How do you think this Park Board will be different than the last one?

Meg Forney: Last December, we passed a historic levy. It’s $1.3 million for expanded youth services. I could go on and on about that, but the unprecedented part about this election was that the voters chose five Commissioners with school-age children, and seven that have ones that are 25 years of age and under. Those are the exact ages that we’ll be focusing on during our term with our youth investment. That’s pretty phenomenal.

I don’t think there’s ever been a Board of Commissioners that has had that type of unique makeup to it, and how apropos is it to be rolling out this funding during our term? These are people whose kids have been involved in our park programs, so they have a personal vested interest and they have a perspective that is unique and timely. When I realized that, it was this huge “ah ha!” that they bring an understanding that’s going to be critical in this term.

These are people that have a sincere interest in our parks. We're going to be needing that. We also have seven new members on a nine member board – people who have never governed before. Steffanie Musich and I have been on for two terms. The two of us realized that in our first term, we may have never chaired a single solitary committee meeting. Well, with seven new people, the odds are going to be that new people are going to be thrown into the deep end.

My experience with the park system has been very, very extensive, but I tell people that when I became a Commissioner and took the oath of office, I feel like I went through a veil to the other side and realized just how huge the system is. I thought I'd do it all but nope, it probably took me a good year-and-a-half, and Steffanie Musich said the same thing. I'm not sure we can afford a year-and-a-half of seven people getting their feet on the ground. So, I decided that in order to jump start these Commissioners into that role of governance, which is totally different than campaigning, I decided to make them co-chairs of the committee. I don't think anybody's ever done that before, possibly at any other governmental level. It’s a mechanism to build on collegiality and let them learn from their mistakes. I’m hopeful that it will be successful in getting them into that role of governance.

These are people that are invested, and they’re eager, and they’re curious. We are onboarding them virtually and I swear they had their noses right up to their computers, they were totally engrossed. It was exhilarating for me to see that real vested interest in how we function, how this department works, how that department works, etc.

You’re the longest serving member of the Park Board. How has the job changed during your tenure?

MF: You know, I say to people that with the pandemic, in some ways we found that possibly our downtown is not essential. We found out that even transportation may not be as essential as we thought. But we definitely found out that parks are essential services. I think it's been a real “aha” to people of just how important that open space is for their sanity and their mental health. It’s really critical.

The youth funding that we have, and how the pandemic has hit our youth – I don’t know the stats, but I do think that youth violence is dramatically up, and I think we, the park system, can play a critical role in engaging our youth in a productive way. It’s so unbelievably timely right now.

Why did you want to lead the board at this moment?

MF: You know, there are seven people that are new to it. It seemed appropriate to have that continuity. Stephanie and I did discuss it, and she indicated to me that she was not interested in the leadership, so I felt like this is the time. I should be rising to the occasion.

There have been past presidents who were in it for the power. I’m not interested in the power, but I am interested in bridging the gap for these new members. When I joined, it was a mature, seasoned board. They already had their stride and how they worked together. In some ways, it was easier for us, and for the seven new members, it will be a bit tougher. How do I run a committee meeting? How do I make a motion? It was needed to have one of us as the leads.

What would you like to see happen with the Cedar - Isles Master Plan?

MF: I want it to be reflective of what the community is looking for. That's probably the most important thing. I was on Zoom with the committee the other night, and I thought it was interesting that naturalization seems to be the way this group is pointing, and I think that’s wonderful. I love it.

We’re realized that with so many aspects of our park system that we tried to tame, mother nature had other ideas. She’s the lead, not us. That’s what I see in the Cedar - Isles conversation. Water quality is paramount to all of us. Also, what I hear is an acknowledgement of climate change, and how important it is that our natural resources are our best line of defense for climate resiliency.

What do you think about the idea of making it legal for people to drink alcohol in parks?

MF: I’d prefer not to. It took us years to pass a smoking ban in our parks. Our parks are largely for families and children, and I don't believe that is messaging that I would prefer to have. I also think that there are a lot of different ways that we could address the issue. Making a blanket ordinance change might not be the way, but giving more capacity to Bread & Pickle and Sea Salt, that type of thing, might be a better way of going that route if there’s interest.

The capacity for doing that oversight is beyond our capability. Our Park Police have enough of a charge just to monitor what we’ve got right now. Just monitoring the speed people are doing on our bikeways, keeping it at 10 miles per hour. We have more critical issues, like youth violence, that needs to be addressed than what comes with open bottle.

What’s your idea of a perfect sunny summer Sunday afternoon in the parks?

MF: For me it would be rowing on the Mississippi River. It’s magical.

I share with people, please, that gorge… most people don’t even know we have a frickin’ gorge! You are in a major metropolitan area, and when you’re in the gorge, you have no idea you’re in it. We have eagles, herons, you name it. I tell my rowing coach, I could care less about improving my stroke, your number one job is pointing out the wildlife. Every season is just incredible. It’s such an asset, and most people don’t realize that it’s there.

I’m also a bike rider, I’m a walker, I used to do triathlons, there are so many phenomenal experiences for people to have. We’re up to 97% of every resident in the city living within six blocks of a park! It’s unbelievable.

Every backyard doesn’t have to have a gorge in it, but we have some pretty damn exciting pieces of nature here. The city of Minneapolis is actually inside a park. It is! That really is the thing that defines the quality of life in this city. It’s the park system that really raises everybody’s boat.

One of our readers wanted to know – why have so many of the park and rec youth centers and open gyms been closed recently while private sports programs have been open?

I was on a call with the Superintendent this morning, and every day, they’re having to close a facility. It’s a revolving door of closures. It’s no different than any other place. Schools are going virtual for two weeks. Is it because of willy nilly-ness? No, it’s out of concern for people’s health and safety.

Now, by doing that are we putting more kids at more risk? Yeah, I’m sure there’s all of that. I know there are kids that are impared by that. But it’s related to concerns for people’s health and safety.

How do you think the board should deal with public-private partnerships moving forward?

MF: I think we are becoming more and more reliant on public-private partnerships. How we craft those agreements is what is the critical part.

We have one of the most remarkable public-private partnerships in the state, and that is the Minneapolis Institute of Arts. It’s outstanding. Are we just lucky, or was it the right attitude, was it the right approach? I don’t know, but it just works.

Have there been mistakes? Have there been things we can be learning from? We’re very fortunate, with something like Water Works, it’s that public-private partnership with the Minneapolis Parks Foundation that makes that incredible.

Do you know who Linda Mack is? She wrote an article about Water Works, and she said it’s like the city’s “front porch.” I think this city will no longer be known as the city of lakes, it’s the city of the Mississippi! We have the only falls on the entire Mississippi! It was through that public partnership that made that whole area iconic. USA Today just named it a top ten new attraction in the country. Who would’ve thought, it was our sewage system, now it’s our front porch.

We’ve got a huge lift with the Lake Harriet Bandshell. I was the co-chair for the fundraising for that when it was originally built. We rely on the private sector, so much, because they’re passionate. How we balance it is probably the most critical thing. But I use the example of the Minneapolis Institute of Arts – it’s an amazing thing, and people forget that it sits on Park Board land.

MF: I can't say the river, huh? I would say the Mississippi. I love all the lakes, I’m a total water baby, my mother brags about the fact that I swam before I walked. Every one of them, to me, is premier. What I experienced on the Mississippi River – I’m getting a bit choked up here – the fact that we’re continuing our paths and public access above the falls, it will change the nature of this city by extending those parkways into North and Northeast Minneapolis. Both areas basically have no bodies of water today.

You hear all about the Nile, but every little kid knows the song, M-i-s-s-i-s-s-i-p-p-i, and most people never go visit the Mississippi. It’s right in their backyard, and we’re about to open the gates and make that accessible to everybody. I just get so excited about that. Favorite body of water? That’s the Mississippi.