'We need to take care of each other:' MPS teachers and ESPs fight for each other

Although not unheard of, it’s rare for two education union chapters to negotiate their contracts together. 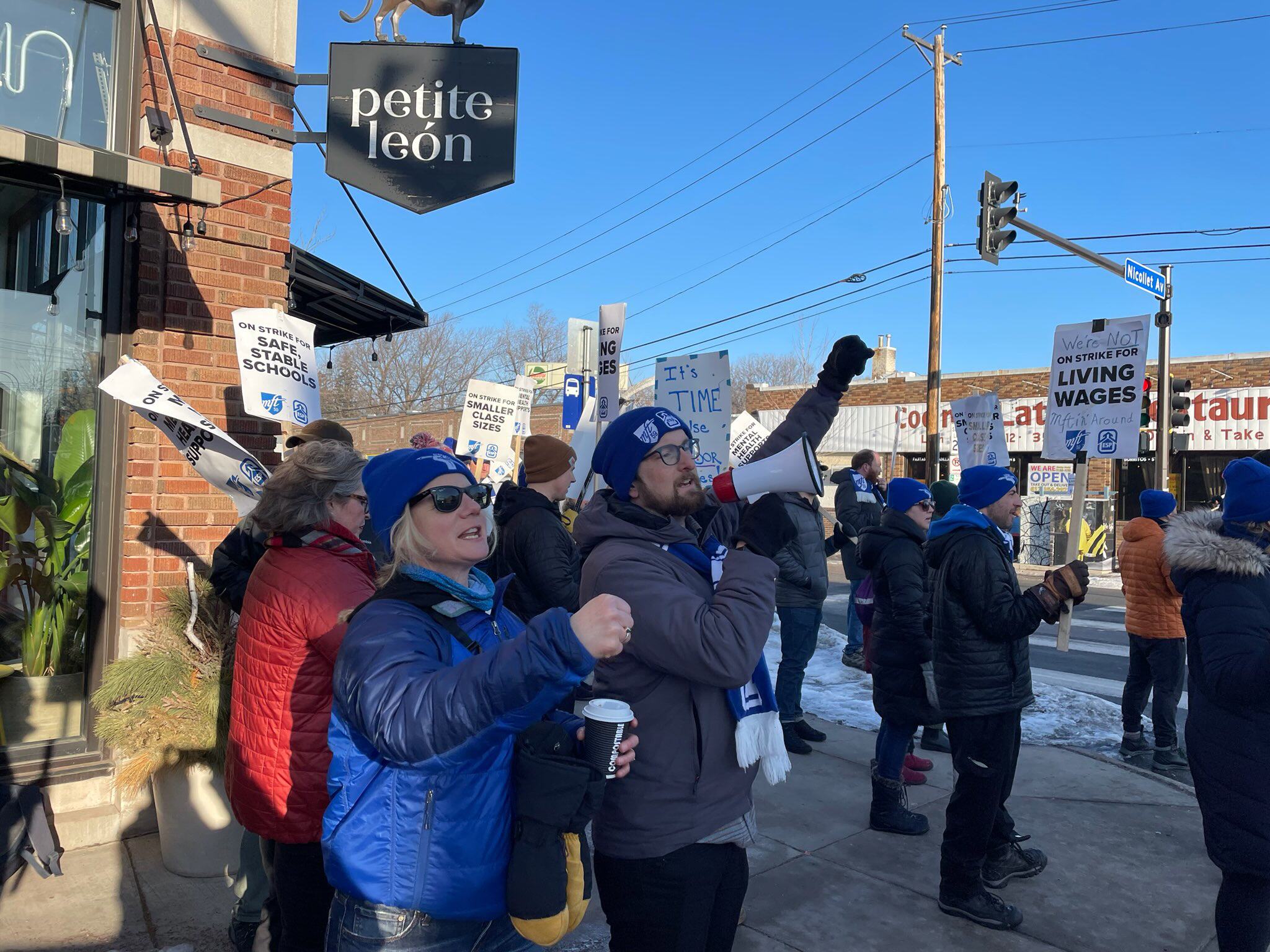 Shane Morin leading union chants with a megaphone while picketing with fellow ESPs and teachers on 38th St. and Nicollet Ave on March 15.

Something that has struck me (no pun intended) about the Minneapolis Public Schools strike and contract negotiations is the distinctive collaboration between the teachers and education support professionals chapters. Although not unheard of, it’s rare for two education union chapters to negotiate their contracts together.*

“The ESP chapter has never worked so closely with the teacher chapter and it’s giving us a lot more power that we’ve never had before,” said Shane Morin, an ESP at Justice Page Middle School. “What teachers are asking for is going to make our lives a lot better.”

The relationship between the teacher and ESP chapters have always been positive, according to Morin. Historically, the teachers have settled their contracts with the district first, which leaves the ESPs with less leverage at the bargaining table. Unions routinely renegotiate their contracts when they expire. This time around, the teachers union joined with the ESP chapter in negotiations and together they are prioritizing issues that ESPs have rallied around for years.

In a Sahan Journal article published on the first day of the MPS teacher and ESP strike, the MFT 59 teacher chapter president Greta Callahan said, “The only number we are hard on is $35,000 for ESPs.”

To make stronger gains for the ESPs during negotiations, the teachers are actively deprioritizing their own financial demands.

“The teachers were asking for a 20 percent raise, which was still lower than what they’ve been losing through inflation, over the last 20 years,” Morin said, on the picket line last Wednesday. ”They dropped it down to a 10 percent ask. That’s a lot of money that they are willing to sacrifice.”

What are they fighting for?

In its contract negotiations with the district, MFT 59 is asking for a significant raise for ESPs, caps on class sizes, and smaller caseloads for special education teachers. The union is asking that class size caps be written into its contract. Currently, MPS has one of the lowest classroom caps for kindergarteners in the nation and is one of a handful of districts that have lower class size caps at schools with higher rates of poverty, measured by the percentage of students who qualify for free and redacted price lunch. The union is attempting to strengthen its contract language around caseload caps by distinguishing caps between elementary, middle, and high school. Last week, hte district offered a proposal on class size caps for high-need schools.

The union’s proposed ESP pay increase is focused on increasing the hours ESPs are scheduled rather than raising the hourly wage. ESPs are paid hourly. Beyond scheduling ESPs full-time hours, MFT 59 is proposing a roughly $5/hour raise for all the tiers of ESPs.

It is rare for ESPs to have full-time hours. Morin said his on-site work is 6.1 hours a day. He also works as a bus aide, which gives him a few more hours of pay each week.

“Right now we work 30.5 hour weeks, the proposal is to bring most ESPs to 40 hours,” said Morin. “That would give more time for teachers and ESPs to collaborate, utilize us in other ways such as welcoming kids off the bus in the morning…and then there's opportunities to get creative with time such as after school programs.”

Teachers recognize that ESPs are not making enough money.

“What we’re asking for is not liveable [for ESPs], but it’s better than what they’re starting at,” Britta Carroll, a special education teacher at Justice Page Middle School, said.  “We’re a team. As a team, we need to take care of each other.”

“We have two or three kids assigned to us who all need a huge amount of support, and then three other kids, who we are not technically assigned to, that also need support,” Ben Polk, a special education assistant at Justice Page Middle School, explained on the picket line last Wednesday.

Morin said every school is short-staffed and there are a lot of vacant ESP positions. “We are really feeling that,” Morin said. Currently, there are 128 paraprofessional job openings which encompass the ESP jobs, among others.

According to Morin, the Comprehensive District Design that was implemented this school year made everyone’s job at Justice Page more difficult. According to district data, the school now has 1,030 students. In 2020, there were 802 students enrolled. “Class sizes are enormous and the hallways can be chaotic sometimes,” Morin said.

What is their job?

Morin starts his school day as a bus aide, which is a unique opportunity not given to all ESPs. He is on the school bus for 45 minutes and then begins his day at school. He works with special education students in general education classrooms for seven periods. “I work with a different group of students every period. Some kids need help focusing, some kids have a challenge like keeping up with what’s being assigned in class,” Morin said. “A lot of these students have really big struggles with interpersonal communication.” Just keeping the students in the classroom is a challenge.

“My job is important. Especially my experiences I’ve had using my creativity to uncover more about a student,” Newman said. “I have discovered a lot about my students because I pay close attention and listen to them. I focus on their interests. I don’t have the license, on paper, but my job manifests through creative thinking and meeting students where they are at.”

Newman describes ESPs as the kids’ confidants. “Once you get trust with a kid, they start to show you what they know,” Newman said. “ESPs are the ears and eyes of the school, the pulse of the school. We see the inner workings when things get overlooked.”

Newman shared a recent breakthrough moment with a student who doesn’t talk. Newman started drawing animals from one of the student’s favorite books and the student took the paper and started writing words. “As a [special education assistant] I have the ability and flexibility to do this,” Newman said.

ESPs are known to be one of the most diverse groups of staff at MPS. “When students see staff that look like them and understand them at a more personal level, it is likely to be an ESP,” Morin said.

Ari Newman fits this description well. “I am trans, non-binary, use they/them pronouns and I am very open about that,” they said. “So, many students come out to me. There are queer students all over the school.”  After school, Newman runs the school’s Rhino Pride group for LGBTQ students. “I feel like it’s a big role,” they said. They also help with the after-school theater group, too.

Newman said being a special education assistant is a perfect job for smart, caring and funny people. “I really love my job and it breaks my heart that it is not appreciated in the way it should be because it’s such a beautiful community to be in,” Newman said. “It’s sad that it's such a high turnover job.”

“I work in special education because it’s the first job where that’s celebrated,” Newman said. “I can use my whole self. I can bring everything I have. I am my full, weird self.”

“We are on the ground, trying to run this place. And everyone is hurting. We all deserve better. The kids are really special,” Newman said. They are glad the teachers and ESPs are working together during contract negotiations and on the picket lines. “We need each other.”

Why does this matter?

A major reason ESPs and teachers are fighting for better working conditions is so that educators stay in the district and continue building strong relationships with their students. Students have been deeply impacted by the pandemic. “It’s even more apparent that it’s affecting students of color,” Morin said. The teachers and ESPs I talked with mentioned the general “pandemic effect” they see in a lot of students. No one knows exactly what is causing the increase in behavior, such as more fighting in the hallways, but Morin attributes some of it to less adult supervision with time missed at school and parents working when students were in distance learning.

Newman said that they interact with students who are traumatized by distance learning, and there needs to be more support for these students. That is one reason why the mental support being written into the union contract is so crucial to educators. “Carrying the weight of the kids’ trauma on your shoulders, that’s not sustainable,” Newman said.

Special education teacher Kristin Vaillancourt, who works with Morin and Polk directly at Justice Page Middle School, said the mental health support will help the ESPs, teachers, and students. “And the living wage for ESPs,” she added.

The historic strike has been received positively from many parents. Even before the strike was announced, Morin told me that there was “so much support from parents…They recognize that it goes much further than missing a few days of school.”

To Morin, the fight for better working and learning conditions goes beyond Minneapolis Public Schools.

“Where schools are at right now, throughout the entire country, the experiences these kids have had, they really are in crisis mode right now,” Morin said. “We can’t just let this go.”

*For transparency, I have a background in education unions. I joined the Milwaukee Graduate Assistant Association in 2005 as a graduate student worker at the University of Wisconsin-Milwaukee. The MGAA was one of the first teaching assistant unions in the country, close behind Teaching Assistants Association, the graduate student worker union that sparked the 2011 Wisconsin labor protests. When I attended and worked at the University of Minnesota, I worked to unionize the graduate student workers. I was eventually paid to do organizing work at the U. Our campaign failed. I recently left my community college job where I was a Minnesota State College Faculty union member. MSCF union falls under the umbrella of Education Minnesota.