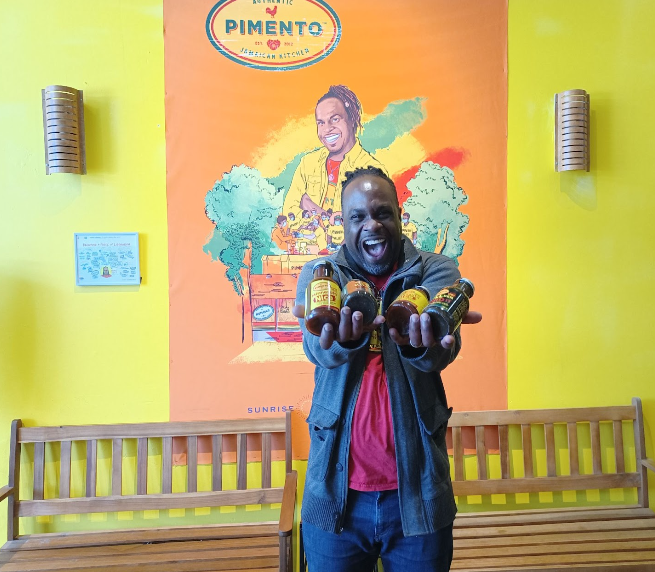 Pimento owner Tomme Beevas holds the restaurant’s mildest and hottest sauces, Minnesota Nice and Kill Dem Wid It, which will be sold in Target stores soon.

Tomme Beevas, the owner of Pimento Jamaican Kitchen and Rum Bar on Eat Street, paused our interview to greet Jeanelle Austin, activist and caretaker of George Floyd Square, as she entered the restaurant.

“Welcome home,” he told her.

Beevas thinks of Pimento as a home for everybody.

“It’s not just for this group or that group. It is for home,” he said. “For you to come home, for everyone to come home and feel that same joy that one would feel when they land in Kingston and Montego Bay, Jamaica. Like a weight has been lifted off.”

The restaurant, which opened its first location in Burnsville after winning a Food Network reality show in 2013, serves dishes from Beevas’ native Kingston, Jamaica, like oxtail, plantains and of course, jerk chicken.

Boneless jerk chicken, that is.

Beevas came up with the recipe after serving his neighbors free food in exchange for them signing up for his social media campaign and filling out a survey.

“That is how we learned about Minnesotans, so they could have spice, but they could not handle bones,” Beevas said. “Jerk chicken requires bones. You’re supposed to be sucking on the bones.”

Pimento also offers sauces ranging from Minnesota Nice to Kill Dem Wid It. These sauces will be coming soon to Target shelves thanks to a recent deal.

Beevas also encourages community growth with Pimento Relief Services, which he and his employees started in 202o following the murder of George Floyd, and empowers other Black business-owners and leaders.

Beevas came up with the idea for Pimento while living in Washington D.C. after living in Miami, where he relished the diverse range of cuisines from different parts of the globe.

“I thought all of America was like Miami, where you could literally go get Filipino food across from a Cuban restaurant, which is housed in a Haitian restaurant,” he said. “To me what America represents is truly that blending of the world, a microcosm of the world.”

If Beevas had stuck to his plan, Pimento would have opened in D.C. Instead, he got a call with an offer to work for Cargill in Minnesota.

“Minnesota? What? Not happening,” he said. “Then they made me an offer I couldn’t refuse and I was like, I’ll give it three years. This is in 2006.”

After years of traveling across six continents for work, Beevas started hosting cookouts in his Minneapolis neighborhood.

“I was home and missing my culture, missing my family, so I’d fire up the grill,” he said.

After serving his family, friends and corporate colleagues, Beevas bought a cheap tent from Target and started selling Jamaican food at festivals and other events.

Pimento’s Minneapolis location opened in 2016, followed by their food truck a year later and the St. Paul location and the Rum Bar opening in 2019.

Beevas searched for a space for the restaurant in North Minneapolis, but couldn’t find one due to property owners charging “exorbitant rates,” he said. When he saw the store in Whittier, he knew it was the one.

“When we found this space, it was perfect. Especially when I saw the back yard was just a dump. It was literally a dump. There were like three cars, four vehicles, including a Cadillac Hearse back there, I swear to God, a 1970s Cadillac hearse,” he said. “I saw it and I thought ‘I want this.’”

The name Pimento comes from the spice, which Beevas says is the “most ubiquitous of ingredients in Jamaica,” or the equivalent of salt to American food. The berry can be crushed for spice, the leaves used for tea, the wood for skewers and the whole berry put in drinks.

“Pimento is what you start with in all foods in Jamaica,” Beevas said.

During construction on the Whittier location, Beevas remembered calling his wife and asking her what she wanted to eat from the diverse variety of cuisines surrounding the Eat Street storefront.

The Rum Bar, Beevas said, is the place where he feels like he’s on the beaches of Jamaica until he walks outside in the dead of a Minnesotan winter.

“With a couple of rum punches in your system, all of a sudden everybody’s falling in love on the dance floor,” he said. “Undoubtedly the sexiest spot in the city. Undoubtedly.”

Corporate responsibility played a big role in Beevas’ days working corporate jobs, and as Pimento’s owner he makes sure to support the community around him and provide resources to Black leaders and business owners.

He started Pimento Relief Services to support the community after George Floyd’s murder and the uprisings that ensued, which coincided with the early days of the COVID-19 pandemic. Beevas said he watched the video of George Floyd’s death after his father saw it on the news in New York.

“I locked myself in my garage and I watched and I bawled. Just that ugly cry,” he said. “The next morning was my birthday, and I’m like ‘what am I going to do?’”

He usually takes his birthday off from work, but on May 28 he walked into Pimento and told his employees that they were going to offer the restaurant as a meeting place for community leaders and the mayor, who is a frequent customer.

“My employees were like ‘nah man, we’re hungry, and we’re hurting. We do not want to see or speak to anybody,’” he said. “I listened and I followed their lead. Then we said ‘alright, well, let’s go ahead and do a food drive.’”

Beevas said that they initially expected a few donations of water and paper towels, but three days after they started taking donations, they had to close the restaurant because they were overwhelmed with donated goods.

“You can stand right here and smell the city on fire and you’ll be driving through the entire city and you’d literally be the only one on the street,” he said. “Then they show up to Pimento and there’s a massive amount of people in the entire street, a traffic jam.”

Today Beevas uses Pimento Relief Services to provide the community with resources however they need. He says that he listens to the community’s needs and provides them, whether it means serving jerk chicken or delivering tents to George Floyd Square.

“Then nobody can say, ‘I would invest in a Black business if only I knew one.’ I solve that problem for you,” Beevas said of the mixers.

He also started a political action committee (PAC) that will launch in June to empower local Black politicians and provide them with the toolkits they need to be successful. The PAC’s goal is to be the “most powerful Black political action group in the state of Minnesota,” and Beevas said that it will support candidates who fight for Black people.

Ultimately, Pimento is about food and community, or “yard,” as Beevas calls it.

“Community means home, it means village, it means our yard,” he said. “Jamaicans have a feeling that if you have a loaf of bread, that’s enough to feed the entire village, because everybody can get a little piece, and one of us doesn’t have to have the entire loaf.”

Beevas’ favorite part of owning Pimento? The food. His favorite dish, which isn’t on the menu, is called the Tomme Sampler and consists of a single bite of each dish they serve.

“The food is sincerely made with love,” he said. “We intentionally infuse positive energy into our food, literally to the point where it’s not uncommon for somebody to bless this food as it’s been made.”

Beevas extends the positive feelings to his customers and the community. During the hour-long conversation, he thanked nearly every customer and greeted passersby from the picnic table in front of his restaurant.

“The other piece is we love our people. We love Black people,” he said. “We want for when somebody comes in here, if no place else they feel loved, they can feel loved here.”

Pimento Jamaican Kitchen and Rum Bar’s Whittier location is at 2524 Nicollet Ave and the St. Paul location is inside the Keg and Case Market at 902 7th St. West.