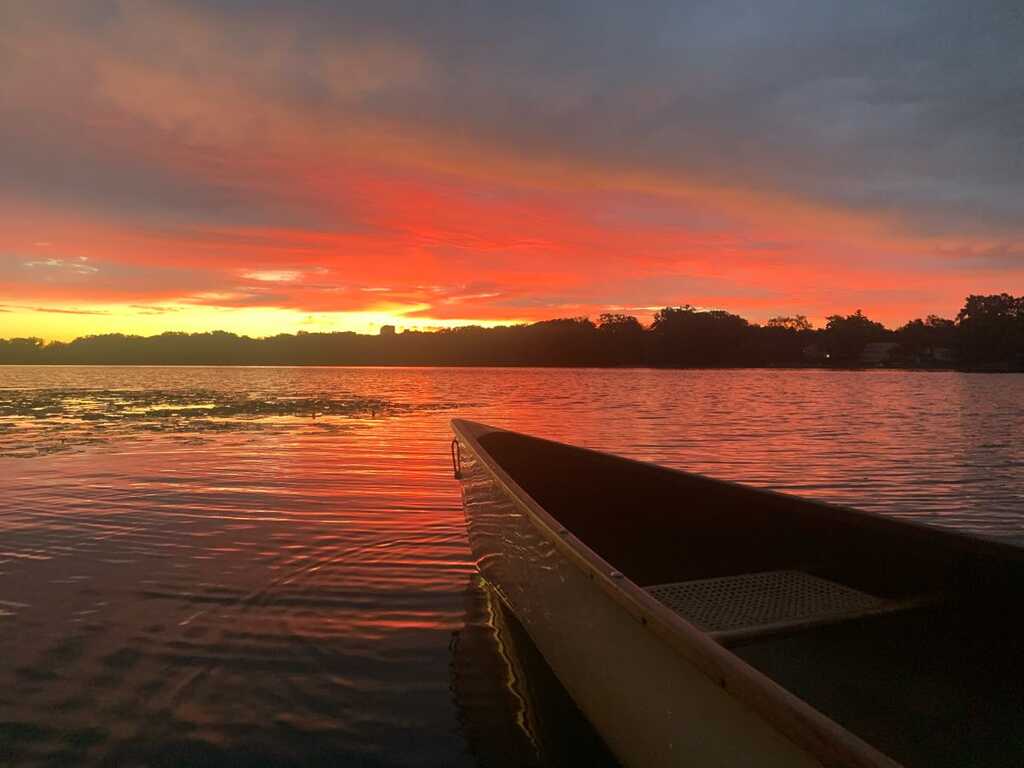 The sun sets across Cedar Lake. Photo by Chris Hughes

On Tuesday, the school board's Committee of the Whole met for the first time this school year, utilizing a new thematic meeting framework established by Interim Superintendent Rochelle Cox. Melissa Whitler followed along with the meeting on Twitter and wrote an article about the presentations at the meeting which included literacy program updates and training for educators. Principals from multiple schools talked about how they are approaching the new school year utilizing "support squads" and sharing inspiration from Gholdy Muhammad’s “Cultivating Genius.”

Yesterday, Kingfield residents once again stopped a Verizon 5G tower from being installed at the corner of 41st & Garfield. As we have reported, Kingfield residents are protesting the installation because they argue the 5G technology can be harmful for people. They are especially concerned about the harm it will cause a woman with multiple sclerosis who lives where the 5G antenna pole is set to be installed. According to a peer-reviewed journal article, medical professionals have actually used 5G technology to help patients with multiple sclerosis.

This is the fourth attempt at installing the 5G antenna pole. Due to the ongoing protest, QualTek hired a security team that arrived at the intersection at 5:30 a.m. QualTek erected a fence around the area to keep people from standing at the installation site. At 10:30 a.m. QualTek removed the fence and left the intersection without installing the wireless internet antenna. Security and QualTek workers declined to comment.

"They were trying to sneak this in," one neighbor told me.

Patina's Lowry East location at Franklin & Hennepin Aves. will close Aug. 28. "In 1995, we originally opened at the corner of 24th and Hennepin, currently Spyhouse Coffee. Several years later in 1997, we moved to the former Kenny's market," Patina's Instagram post reads. "We have enjoyed being a part of this vibrant and diverse neighborhood. We are very grateful and appreciative to our loyal customers and staff who have made that location so special." Customers can visit Patina's 50th & Bryant location.

Transportation Secretary Pete Buttigieg is in town this morning touring Lake Street on a city bus with Mayor Jacob Frey. Reporter Frederick Melo has video of Frey talking about Lake Street and the soon-to-be-demolished Kmart. (Twitter)

Residents spoke out against the Minneapolis Police Department's future use of drones during a public hearing yesterday. (WCCO)

A runaway squash plant in the Wedge (WedgeLIVE!)

Want to help protect our water? Join the very popular adopt-a-drain program to help keep your local drain clean and clear. Bonus: you can keep your block from flooding when the drains are clogged with leaves and trash!

The Park Board really needs refs if you're looking for a positive way to help kids in the community.

There is free yoga at 7 p.m. at Hidden Beach. Accessible, all-levels welcomed.

Minneapolis punk band Off With Their Heads has a show at Mortimer's tonight.

Unleashed Hounds & Hops is holding a fundraiser for The Great Dane Rescue of Minnesota & Wisconsin tonight.