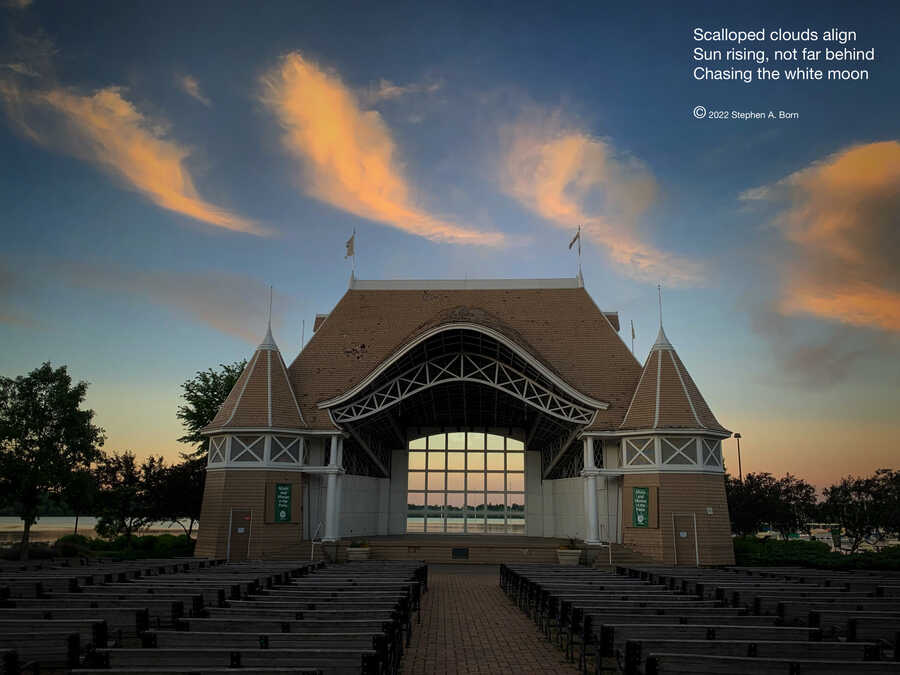 The Lake Harriet Bandshell at sunset. Photo and haiku by Steve A. Born of Armatage. The haiku reads "Scalloped clouds align, Sun rising, not far behind, Chasing the white moon." Can you think of a haiku for this photo?

Look at our map of Southwest Minneapolis!‍

In December 2021, we started a secret, non-news project: produce a cool yet useful map of Southwest Minneapolis. Seven months later, we are proud to reveal our collaboration with Juxtaposition Arts.

Why did we create this map? During my first week as editor of Southwest Voices, I looked everywhere for a comprehensive map of our quadrant of the city. The best one I could find was a MeetMinneapolis map I found at a rest stop somewhere near the border of Minnesota. I cut it out and posted it to the wall next to my desk. That's all I had. I knew we could do better.

We hope our new map illustrates our shared love for this quadrant of the city.

But wait, the news gets better. We are doing a limited screen print of this map.

We will hand-deliver one of the screen-printed maps to everyone that becomes a member at the "Booster" level. Yes, that includes existing Boosters and anyone who signs up to be a Booster or upgrades to Booster level. We'll continue this promotion until we run out of maps!

Thanks again to Juxtaposition Arts for being a partner in this project. 💖

The Policy & Government Oversight Committee meets today at 1:30 p.m. On the consent agenda (typically no discussion) is a contract agreement for Aspen Psychological Consulting to do pre-placement and fit-for-duty evaluations for Minneapolis Police Department and 911 employees. The committee is also appointing two civil service commissioners.

The City Council's Committee of the Whole meets tomorrow at 1:30 p.m. On the agenda is a report on "first steps to implement the executive mayor-legislative council government structure" and finding needed for the creation of three new roles: city operations officer, community safety commissioner and city auditor.

The full City Council meets on Thursday at 9:30 a.m. (no agenda yet). June 30 is the last day the council can override the mayor's veto for the full Hennepin Avenue redesign plan. The plan has already been delayed one year--the limit for the federal funding to stick around.

No meetings this week

On Saturday, Gov. Tim Walz signed an executive order affirming people's rights to abortion in Minnesota and that he will decline requests for the out-of-state arrest or surrender of anyone charged with the "provision of, assistance with, securing of, or receipt of reproductive health care services" in Minnesota. (State of Minnesota)

The 50th anniversary of the Pride parade was this weekend, ending in a celebration at Loring Park. (Star Tribune)

The Twin Cities Animal Humane Society received an estate gift of $6 million with plans for a new facility in the works. (MPR News)

The Roe decision came down when we were producing our Friday newsletter. We sent the newsletter off and then took in the news.

Many people like to donate their time and money during moments like these, and it's hard to know where your resources are best spent.

Minnesota organizations you can donate to, in no particular order, are: Just the Pill, Our Justice, Spiral Collective, Hot Dish Militia, Unrestrict MN, Gender Justice, and Whole Woman’s Health. Thank you to a Minneapolis abortion rights activist for this list of organizations.

This Twitter thread by Rabbi Danya Ruttenberg is also helpful in learning what resources are not needed.
-
The Lyndale Neighborhood Association is hosting its Summer Kick-Off: Annual Meeting & Board Election tonight.

Minneapolis Public Schools is now offering free nutritious meals and snacks for anyone 18 and under at parks, libraries, community spaces, and at the district's food truck and food bus. These free meals and snacks are part of the district’s participation in the federally funded Summer Food Service Program.

It's Great American Picnic Day! Take a blanket and some snacks to a nearby park and celebrate. Here's a gathering happening at Washburn Fair Oaks.

The Detroit Don King Band is performing at the Lake Harriet Bandshell at 7:30 p.m.

Sign up for tomorrow night's wood burning workshop at Primitiva. You will create and take home two wooden coasters or a wall hanging.