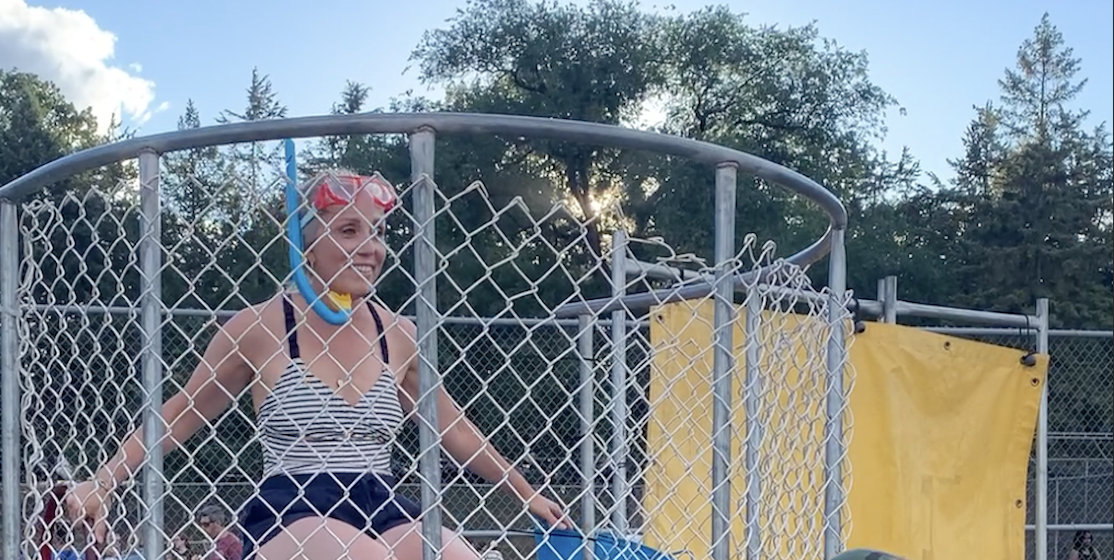 Ward 11 Councilmember Emily Koski gets ready to be dunked at Pearl Park on July 28. Koski was participating in the Hale Page Diamond Lake Community Association's Picnic in the Park.

Every Monday we let you know about the week's civic meetings, including the Metropolitan Council. As we expand our local government coverage (thanks to our members), we wanted to establish what the Met Council is and what a meeting looks like before digging into the details.

Henry Pan covered last week's Met Council meeting and included an explanation of what the council does.

Josh Martin wrote a similar piece about the Park Board last month.

The more you knoooow. 🌈

If you are looking for summaries of any civic meeting, check out the Minneapolis Documenters website. They also have a meeting calendar.

Minneapolis City Council and committees
The Policy & Government Oversight Committee meets today at 1:30 p.m. On the consent agenda is a contract approval to repave the Midtown Greenway (whichwasn't paved very well the last go-round). The committee is also voting on approving the contract to demolish the Kmart building (it's happening!) and a total of $387,500 in workers comp claims for two Minneapolis Police Department officers.

The Committee of the Whole is meeting tomorrow at 1:30. There will be a public hearing for the mayor's nomination of Dr. Cedric Alexander to be the commissioner of community safety. The "strong mayor" city government structure will also be discussed via a proposed ordinance.

The full City Council is meeting on Thursday at 9:30 a.m. No agenda yet.

Minneapolis Public Schools School Board
The Committee of the Whole has a special meeting with the Minneapolis Park and Recreation Board tomorrow at 5 p.m.

Minneapolis Park and Recreation Board
The Park Board meets Wednesday at 5 p.m.

We posted video of both Councilmember Emily Koski and Mayor Jacob Frey getting dunked in a dunk tank. (Twitter)

Southbound East Bde Maka Ska Parkway will be closed to vehicle traffic from Lake Street to 36th Street for the next six weeks. The reason? The new park pavilion construction. (Park Board)

The LynLake Art Series travelled down to the Midtown Greenway with a historical nod. Fun fact: did you know the area was home to some of the best local graffiti artists' work before the Greenway went in? (Twitter)

Lonnie McQuirter from the 36 Lyn Refuel Station and Christine Ward from Patina were recognized as “America’s Retail Champions” by the National Retail Federation. (Minnesota Retailers Association)

It's going to be another hot week--the perfect time to take a dip in our lakes. Did you know you can check for closed beaches every day from the comfort of your own home/internet connection? Yes you can! (Southwest beaches look good today but Lake Nokomis has an advisory)

If you are looking for some music that sounds like Paul Simon meets “Weird-Al” Yankovic, do we have a treat for you. Ben Cook-Feltz is playing at the Lake Harriet Bandshell tonight at 7:30 p.m.