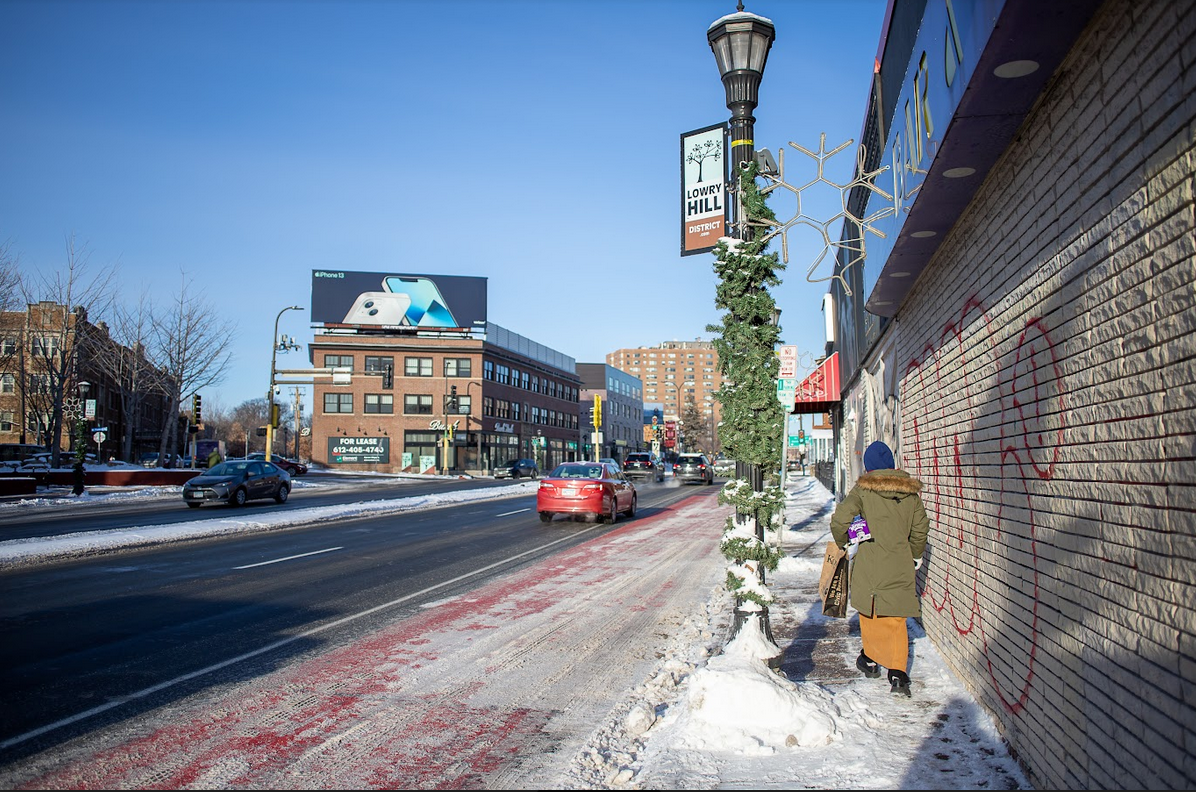 This article is part of our Hennepin Avenue Redesign Perspectives Project.

Tonight the City is hosting its final public meeting about the Hennepin Avenue South redesign before the plan goes to the City Council for approval.

In a design recommended by the City, Hennepin Avenue South, between Douglas Ave. and Lake Street, will see one of its travel lanes converted into lanes reserved exclusively for Metro Transit buses. The same design will also feature a two-way raised bikeway, as well as wider sidewalks.

Representatives from the city say this will serve the needs of those who travel to and through Hennepin better. It will also meet a slew of climate change and transportation goals passed by the city in recent years, including the 2040 and Transportation Action plans. It will also prepare the corridor for the upcoming E Line rapid bus project. Rapid bus lines operate faster and more frequently by serving fewer stops. The E Line will replace the 6 which currently operates on Hennepin Avenue.

“There are a lot of issues with this particular roadway, you know, it's in the city's high-injury network, the infrastructure itself is outdated,” said city transportation planner Becca Hughes. The City will rebuild Hennepin regardless of whether the current plan survives in its current form. This stretch was last rebuilt in 1957.

Transportation advocates support the plan because of its potential to make Hennepin safer for those who walk, bike, and take transit.

Steve Davis was hit by a car on Hennepin about two and a half years ago. “[I was] trying to catch [the bus to] go to school. I was kinda late to school but you know,” said Davis, a Southwest High School senior, as he waited for the bus at Uptown Transit Station with a fellow classmate. They ride the 6 to and from school everyday and welcome the proposed changes, particularly with the transit lanes. “That would help a lot,” said Davis.

Tom Collins, who rides the 6 for work and shopping, was astonished by the scope of the project after learning about it for the first time from this Southwest Voices reporter.

“That'll be huge, that'll be a huge change,” said Collins. “It just seems more natural, you know, get a little bit more safety for the bicyclists. Heck yeah. And I know it's like a war zone out there when you're biking, you know, it would be nice to have some advantages.”

Not everyone is completely onboard with the proposal. Elsie Wilson, an Uptown resident who works at Hennepin County Medical Center and is a fair-weather bicycle commuter, is worried about people driving on the proposed cycle track, because the dashed yellow line may mislead drivers into thinking they can indeed drive on it. She was almost hit by someone who drove onto a similar cycle track elsewhere in the city.

“It’s a matter of time before someone gets hit,” says Wilson as she rode the 6 to work, adding she prefers to bike because it’s faster than taking the bus.

Wilson’s concern may be alleviated by the proposed curb cuts and raised sections that separate the cycle track from the bus lanes.

Perhaps the strongest force of opposition to the project has been from local businesses, mostly because they are afraid of losing their parking that is used by people who come from outside the area.The over 300 parking spots currently available on Hennepin Avenue South will be reduced to 20 spots, a 95% drop in parking.

The City insists there’s enough parking to go around. They plan to encourage those who need to drive to Hennepin to park on the side streets and they also plan to install parking meters. It won’t just be on Hennepin: they plan to do this elsewhere in the city in the coming years. “So there [are] nearby parking opportunit[ies]. We just need to manage that curbside better,” said Klugman.

Tony Gulyard, owner of One 21 Barber Shop, next to Cafe Meow, isn’t convinced.

“This isn't one of these businesses where you’re neighborhood-bound. Because if it's just neighborhood-bound, you're never gonna, you can't survive. We pay $3,500 a month in rent,” said Gulyard. “So if there's people who live over here, you happen to be white or whatever, and you don't support our businesses, how are we supposed to survive as a black-[owned] business?”

A neighboring business received a one-star Google review because of their concerns over the design. "Owner is actively lobbying against making Hennepin Ave a better space for people instead of cars," the review reads. Reviews like this worry Gulyard.

The City acknowledges the pandemic made it challenging for them to conduct in-person outreach to residents, transit riders, and businesses because of an ongoing state of emergency.

“There's no question that we prefer face-to-face. I would have door-knocked myself, just as I had done in the past in 2018 and 2019. Had we had the ability, both Allan [Klugman, principal engineer at Minneapolis Public Works] and I would have done that,” said Hughes.

The City and some advocates insist the project involved the most robust outreach and engagement process ever undertaken by the City because of the amount of people involved.

Businesses along the corridor could suffer because fewer people may want to brave construction dust, barriers, and equipment to patronize them.

“I'm an infrastructure fan who enjoys seeing what the construction looks like and what's under our streets, but that's not necessarily everybody who's on the Namaste or Nico's patio,” said Julia Curran, a graphic designer and climate change activist who has lived adjacent to Hennepin all of her life.

Should the recommended layout be approved, City staff say they are committed to working with business not only on district parking and loading needs, but also other strategies to support businesses during construction. There is precedent for cities funding local businesses to survive, as what happened with a similar project in the San Francisco Bay Area.

“We haven't even had that conversation,” said Hughes. “We aren't committed to anything at this point because of the fact that we're working through stuff right now, to get the layout through the [City Council] process." The City Council should be voting on the plan in February or March.  The City has to stick to its timeline because the project is tied to federal funds. These funds will be forfeited if the project gets delayed further.

City officials will present the proposal and receive feedback from the public at an online meeting Thursday at 4:30 p.m. Those unable to participate can review a video online explaining the project’s purpose and recommended layout. The city will accept comments on the project by e-mail or through their hotline at 844-628-6228 until January 28.