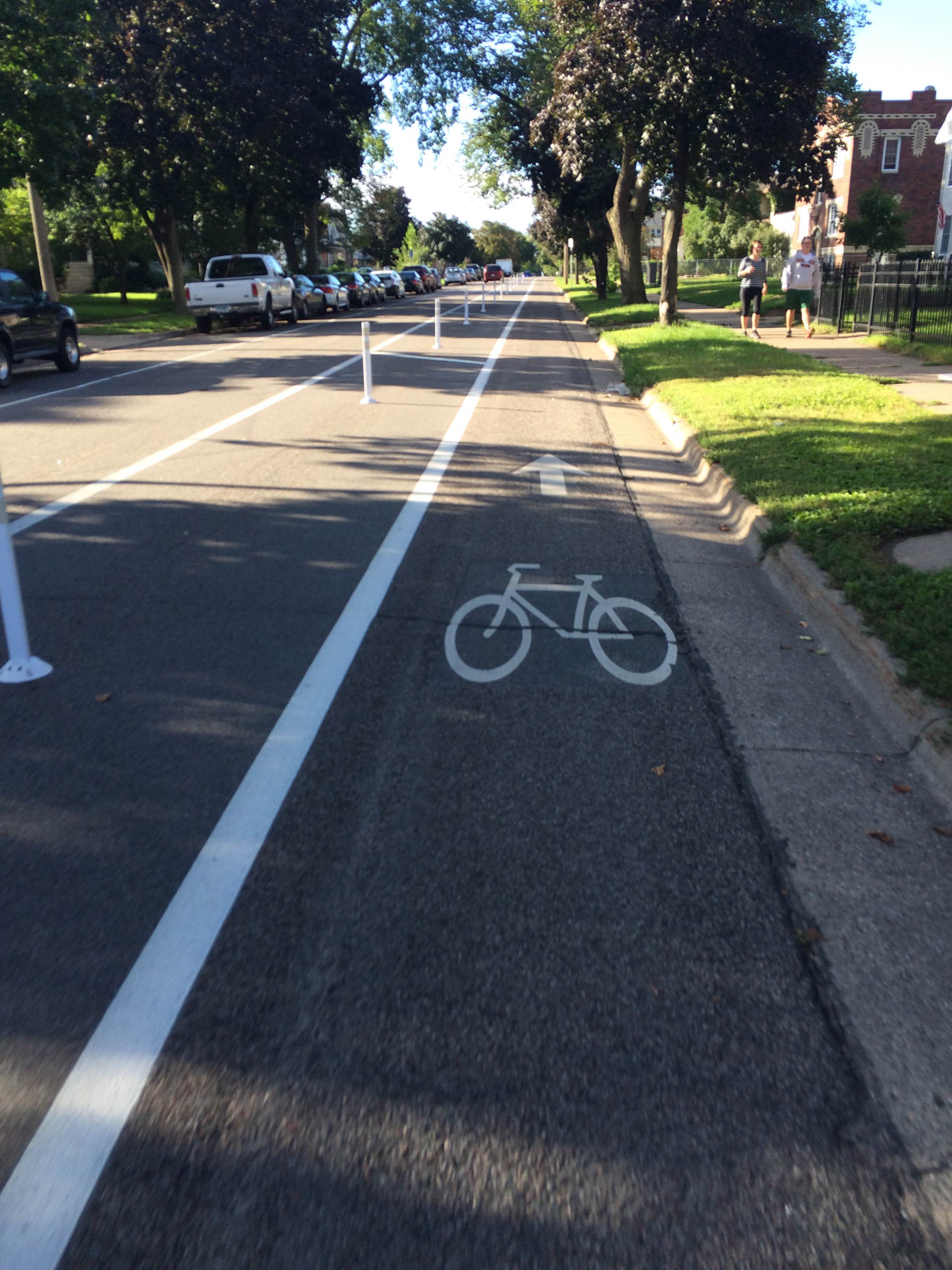 The one-way Blaisdell bike lane is morphing into a two-way bike lane this summer. Photo courtesy of Our Streets

New bikeway construction is almost done in the Lyndale and Kingfield area. You might be familiar with the bike lanes on 1st Avenue and Blaisdell Avenue South that run up to downtown. Construction on the southern part of the aptly-known Whittier/Lyndale bike way started a few weeks ago along Blaisdell Avenue South. At the Lyndale Neighborhood Association last night, Ryan Gottsleben, a Public Works engineer, said the only construction left is laying the asphalt and striping the lanes. The workers have to wait until it gets a bit warmer to restripe. Gottsleben said the Blaisdell bikeway will be open in early June.

When the boys hockey team made its run last year, we sat down to talk to the boys' parents, and they all brought up the impact that coach Joe Dziedzic has had on the program. Here's hoping Goldsmith's hire will do the same for the girls.

Guess what? Ok I will tell you. We are launching a new series,  Laundromats of Southwest. We are visiting all the laundromats in Southwest and compiling information on them as a resource for the community. Our first stop was the Giant Wash Laundry on Lyndale Avenue South and 24th Street in Whittier. For now, the series lives on Instagram but will blossom into a detailed guide once the tour is complete.

Watch out for the Minneapolis Litter League this summer. The summer program is full of competitive environmental challenges for youth and their families. And there is still time to sign up (Star Tribune).

Our reporter Abdi Mohamed told me about the PBS documentary "The Baldies." The Baldies were a Minneapolis skinhead crew that fought racists in 1980s. Their early stomping ground? Uptown (PBS).

Our weather could be worse, like it was on this day in 2013 during a major ice storm (Reddit/Minnesota Department of Public Safety).

Here is the perfect reason to go get (more) seeds and plants for your garden: sales have been slow at gardening businesses. Support your local gardening store (WCCO).

The MPS School Board Committee of the Whole meets today at 1:30 p.m. with a fairly light agenda. This meeting will be livestreamed and you can attend in-person.

The MPS School Board Policy Committee meets at 4:30 today.  The agenda includes policy overview regarding bus safety and wellness. This meeting is open to the public but will be held in-person only at the Davis Center.

The City Council Committee of the Whole, will meet at at 1:30 p.m. today. There are a lot of impactful items on the agenda including a report on the city and Hennepin County's joint strategy for responding to homelessness in Minneapolis, Mayor’s Proposed Executive Reorganization Plan, and the new Public Safety Department charter amendment developed by current councilmembers.

Hennepin County officials are holding a special meeting at 1:30 p.m. for final approval of the 2022 redistricting plan.

Via the Hennepin County Library, zAmya Theater Project is holding a virtual "zAm jam" at 2:30 p.m. People who have experienced homelessness are especially encouraged to attend. zAmya uses creativity, collaboration and community-based theater to build understanding and connection between people who've experienced homelessness and those who have not.


Skeeball Tournament at Up-Down tonight at 7 p.m. Bring your quarters (or get some there).

The American Swedish Institute is offering a virtual museum visit tonight. The tour will offer a behind-the-scenes look at Paper Dialogues. Anna saw the exhibit over the weekend and was shocked to learn that artist Bit Vejle uses scissors instead of an X-ACTO knife in her paper cutting. Virtual museum tours are perfect for people who can't visit in person or simply want a unique arts experience from a distance.