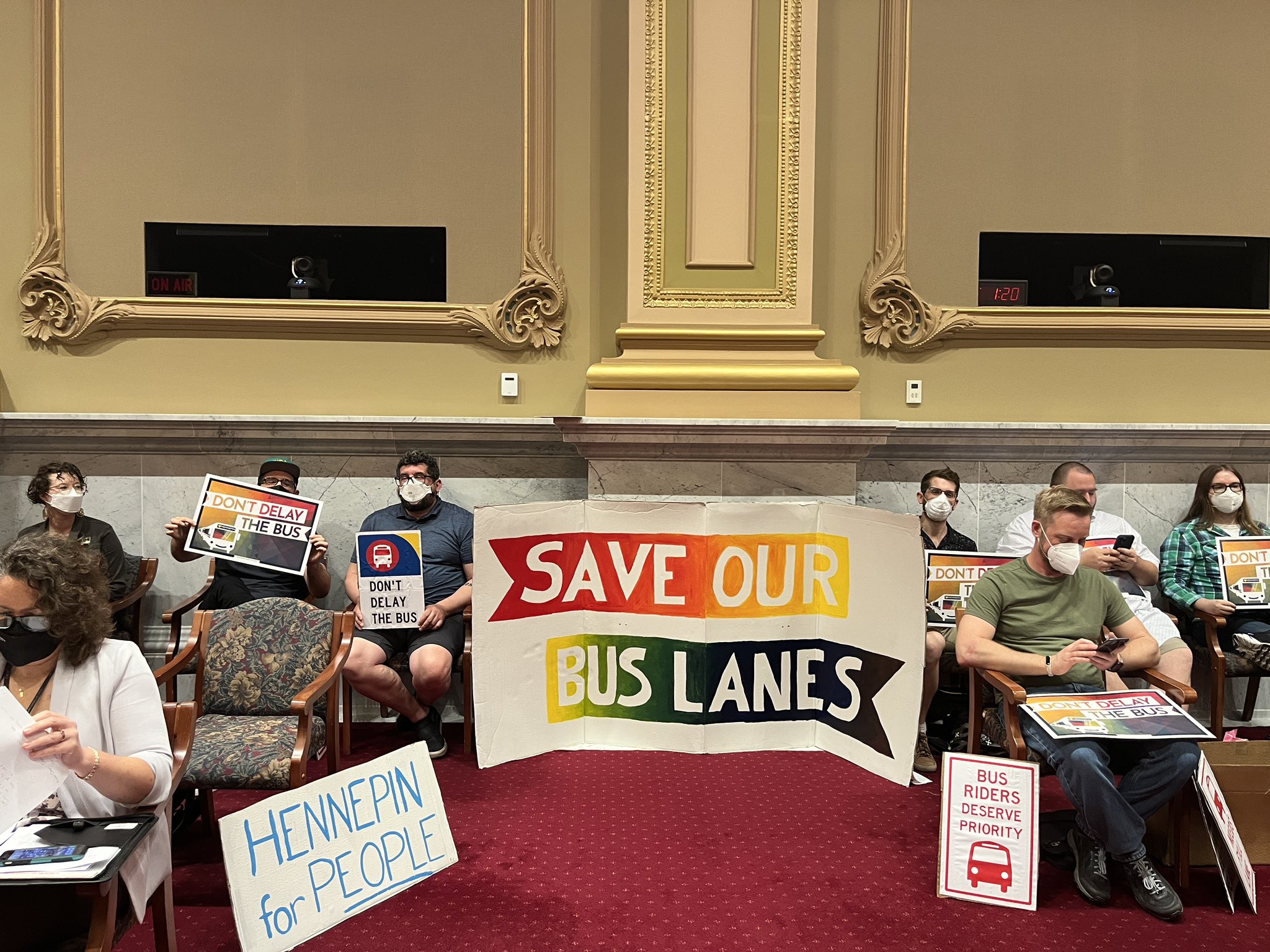 Supporters of the Hennepin Avenue South redesign plan sat in at a May 19 committee meeting where the plan for "dynamic lanes" instead of all-day bus lanes was discussed publicly for the first time.

On Friday night, Mayor Jacob Frey vetoed two items in the Hennepin Avenue South redesign plan legislative file that effectively eliminated all-day bus lanes from the plan. The City Council had approved the full plan with an 8-5 vote the day before. The plan would have been veto-proof with a 9-4 council vote.

All-day, or 24/7, bus lanes have been a focal point of the Hennepin Avenue South redesign during its extended community engagement process. The all-day bus lanes were part of the Public Works proposed and final design submission. The written plan reads, “Two full-time (24-hour) dedicated transit lanes from Douglas Ave to Uptown Transit Station.” Uptown Transit Station is a half-block north of Lagoon Ave.

The bus lanes have also been the greatest point of contention within the plan, as Hennepin Avenue South business owners argue the loss of parking would mean a loss in business.

Transit users and advocates like Hennepin for People argue that the all-day bus lanes are a reflection of the City Council-approved Transportation Action Plan and are a needed infrastructure shift to combat the effects of climate change.

Supporters of the redesign who closely followed its path through City Council were seemingly stunned when the Public Works department released a revised plan that suggested the all-day bus lanes would begin as “dynamic lanes” (a hybrid of parking and bus-only access).

On May 19, people fighting for the 24/7 bus lanes came to the Public Works & Infrastructure committee meeting to express their feelings about the plan’s sudden erasure of the all-day bus lanes.

Katie Jones of Hennepin for the People said a change to a design plan this late into the process was “precedent setting.”

The discussions about changing the 24/7 bus lanes to “dynamic lanes” started after the City Council approved Mayor Jacob Frey’s nomination for a new Public Workers director, Margaret Anderson Kelliher. In February Kelliher told the Southwest Connector, “I strongly support having 24/7 [dedicated bus] lanes, but I am not sure it will be needed on the day we open.”

To counter the Public Works newly defined “dynamic lanes” in the redesign plan, Ward 10 Councilmember Aisha Chughtai put forth a staff directive to work with Metro Transit to ensure the 24/7 bus lanes are in operation from day one of the completed Hennepin redesign. The directive passed in committee with a 3-2 vote.

When the City Council voted on the Hennepin Avenue South redesign plan on June 16, Councilmember Emily Koski asked if the plan could be voted on per section, suggesting she wanted to vote against or for specific parts of the plan. The council ended up voting on the full plan and it passed with a 8-5 vote.

We are waiting to hear back from numerous councilmembers on why they voted no on the plan.

This item included a resolution put forth by Ward 10 Councilmember Aisha Chughtai at the June 9 Public Works & Infrastructure Committee meeting to update certain areas in the plan designated as “Transit Lane” to “Transit Lane (No Parking).” This would automatically mean vehicles could not park in the bus lanes.

The items he approved were:

Hennepin for People are planning a march on June 28 at 5 p.m., two days before the City Council meeting where the plan could be reinstated if the council votes 9-4 for the full plan, and thus against the mayor’s veto.

‍Check out our not-very brief history of the Hennepin Avenue redesign for more information.