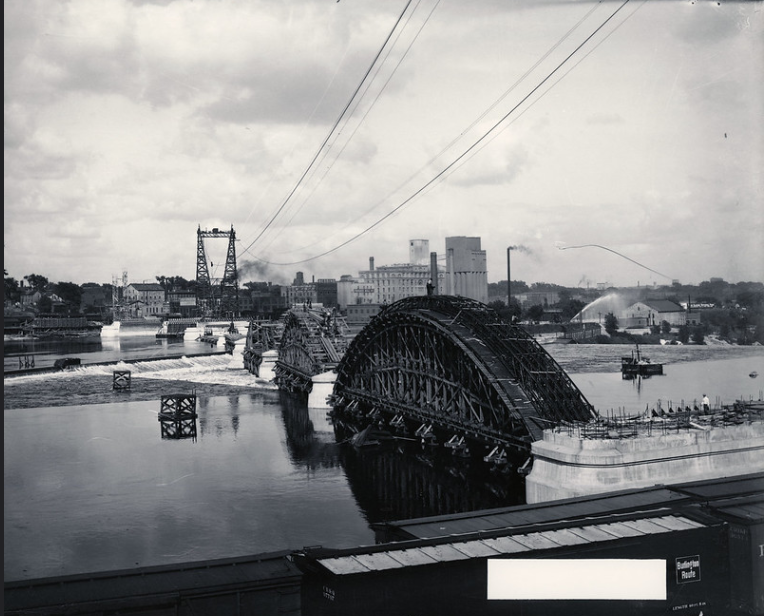 An undated picture of the 3rd Street Bridge, mostly likely taken around 1917. Photo courtesy of City of Minneapolis Archives

Last night the MPS School Board held a special business meeting to vote on a resolution to modify the school calendar consistent with the Minnesota Department of Education regulations on school days and hours, and the return to work agreement that was negotiated with MFT teachers and ESPs to end the strike. After comments and questions from board members, the board voted 5-2 on the calendar resolution, with Director El-Amin abstaining.

After the vote, students at the meeting started to vocally protest. Students interrupted the meeting shouting "our schools" and "we are the students, the mighty, mighty students." Chair Ellison sent the meeting into recess during this time, so the MPS recording does not show most of the protest.  A video posted to Twitter during the recess focuses on a student using a bullhorn who said, "if you were actually at the schools, you would know, not a single person in all of my school... that want to see these extended days." Superintendent Graff left the meeting during the recess because some of the student protestors were using profanity.

After the recess, the students continued to protest, but Ellison continued the meeting, first in calling for a roll call vote on the resolution to modify the calendar, and then taking another vote to pass the consent agenda. Melissa Whitler will have a full summary of the meeting later today.

Michael Sack wrote about his experience as a Metro Mobility rider and why the service needs more funding. Did you know people who ride Metro Mobility can expect a one-mile ride to take up to 34 minutes? Earlier this year I talked with Sack about the importance of clearing sidewalks of snow to ensure they are accessible for all of our neighbors.

Our buddy Josh Zuehlke, who is also a realtor, wants to answer your questions about the real estate market in Minneapolis. Want to know what an HOA is really about? How expensive houses are going to be in a particular neighborhood? What you can afford as a single-income household? Ok, those are just my personal questions. Feel free to crib them and ask more over at his Instagram post. If you don't want to ask them in such a public format, text them to us at 612-204-2887 or reply to this email and we will post them for you.

The Starbucks workers at the 54th and Lyndale location are joining the wave of service workers attempting to unionize. Workers will vote on whether to officially unionize early in April. (Axois)

If you or your neighbors have backyard chickens, watch out for a nasty strain of avian flu hitting our state. (MPR News)

State Republicans and local progressive activists are questioning Minneapolis’ effort to use nonprofit groups instead of cops to keep the peace. Both groups want to see more transparency in the process. (Minnesota Reformer)

Today at 2 p.m, Sea Salt Eatery is having an interview day.  Stop on by and chat about working with them. You are guaranteed to stay busy at that job, that's for sure.

The Public Health & Safety Committee is meeting today at 1:30 p.m. The agenda has a host of consent items (non controversial, won't yield discussion) and two discussion items on drug pricing and a national labor study that highlights occupations with the highest levels of workplace violations (e.g. sick time violations, wage theft). You can watch the meeting live or via YouTube after.


Beyond the Box, a collaboration between Minnesota Fringe, Vibrant and Safe Downtown and the Downtown Improvement District, is accepting applications for artists proposals for a series of public, outdoor performances. Applications are due April 7.

Get to know our Hennepin County attorney candidates by watching a recording of the Hennepin County attorney candidate forum hosted by the local American Constitution Society chapter, and the student chapters at the University of Minnesota Law School, Mitchell Hamline School of Law, and University of St. Thomas School of Law. Judicial people talking to law students--I can only imagine how detailed the discussions get.

‍Driftwood Char Bar is hosting a Wine & Canvas event tonight. You can learn how to paint a beautiful garden. All painting supplies included with your ticket.

It's Mutt Breed night at Unleashed Hounds and Hops. Bring in your mutt, spin the prize wheel. Woof.