Streetcars served Minneapolis for nearly 75 years before buses took over as the main form of mass transportation. 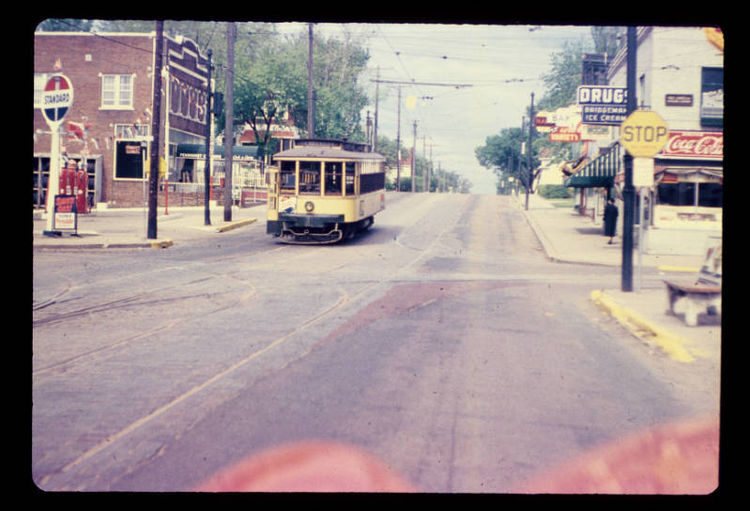 The Oak-Harriet streetcar at 50th Street and Penn Avenue, 1954.

Streetcars served Minneapolis for nearly 75 years before buses took over as the main form of mass transportation. Josh Biber wrote about the general history of Minneapolis streetcars and the Como-Harriet Line in the first article of the Streetcars of Southwest Minneapolis series.

In this article, Biber focuses on the Oak-Harriet and Bryant-Penn lines.

The Como-Harriet and Oak-Harriet lines shared many miles of track until they separated at 44th & Xerxes in the Linden Hills neighborhood. Here the Oak-Harriet line diverged south and  down Xerxes' hills until it reached 50th Street. The small business district that sits at the intersection of 50th & Xerxes is due to the fact that this was once a heavily traveled streetcar junction.

At 50th Street, the Oak-Harriet line turned east towards Penn Avenue. Completed in 1913, this section of track was later met by the Bryant-Penn line which joined the 50th & Penn intersection in 1927.

Beginning in 1890, the Bryant-Penn line served East Harriet, Lynnhurst, Kenny, and Armatage neighborhoods. The line first connected downtown Minneapolis to 38th & Bryant, but soon the line was expanded further south. In 1892, the Bryant-Penn line terminated at 40th Street. By 1903, the Bryant-Penn line extended to 46th Street. In 1911, the line expanded to 50th & Bryant. Over the next several years, the line was eventually extended west along 50th to Penn Avenue. At 50th & Penn, the line made an L-turn down Penn to the final stop at 54th & Penn. The small business districts at 50th & Penn and 54th & Penn are largely due to these intersections once being popular streetcar hubs.

At the cost of roughly $60,000 per mile of laid track, the extension of the Bryant-Penn line was a relatively small price to pay for increased accessible transportation and the urbanization of East Harriet, Lynnhurst, Kenny, and Armatage. With the extension of the Bryant-Penn line came the development of many brownstone apartment buildings alongside Bryant Avenue and single family homes along surrounding blocks throughout the twentieth century.

Development was not just reserved for housing, as businesses began to gain traction on larger streetcar intersections. The 50th & Bryant intersection saw modest business development in the late 1920s to early 1930s. One particular building of interest is the Herman Bachman, of the famed Bachman's Floral & Garden, building at 50th & Bryant. Built in 1919, this two-story brick building once housed a drugstore and bakery.

This article is part of the Streetcars of Southwest Minneapolis series.