Strike update, interview with Rep. Emma Greenman, and get funding for a park project 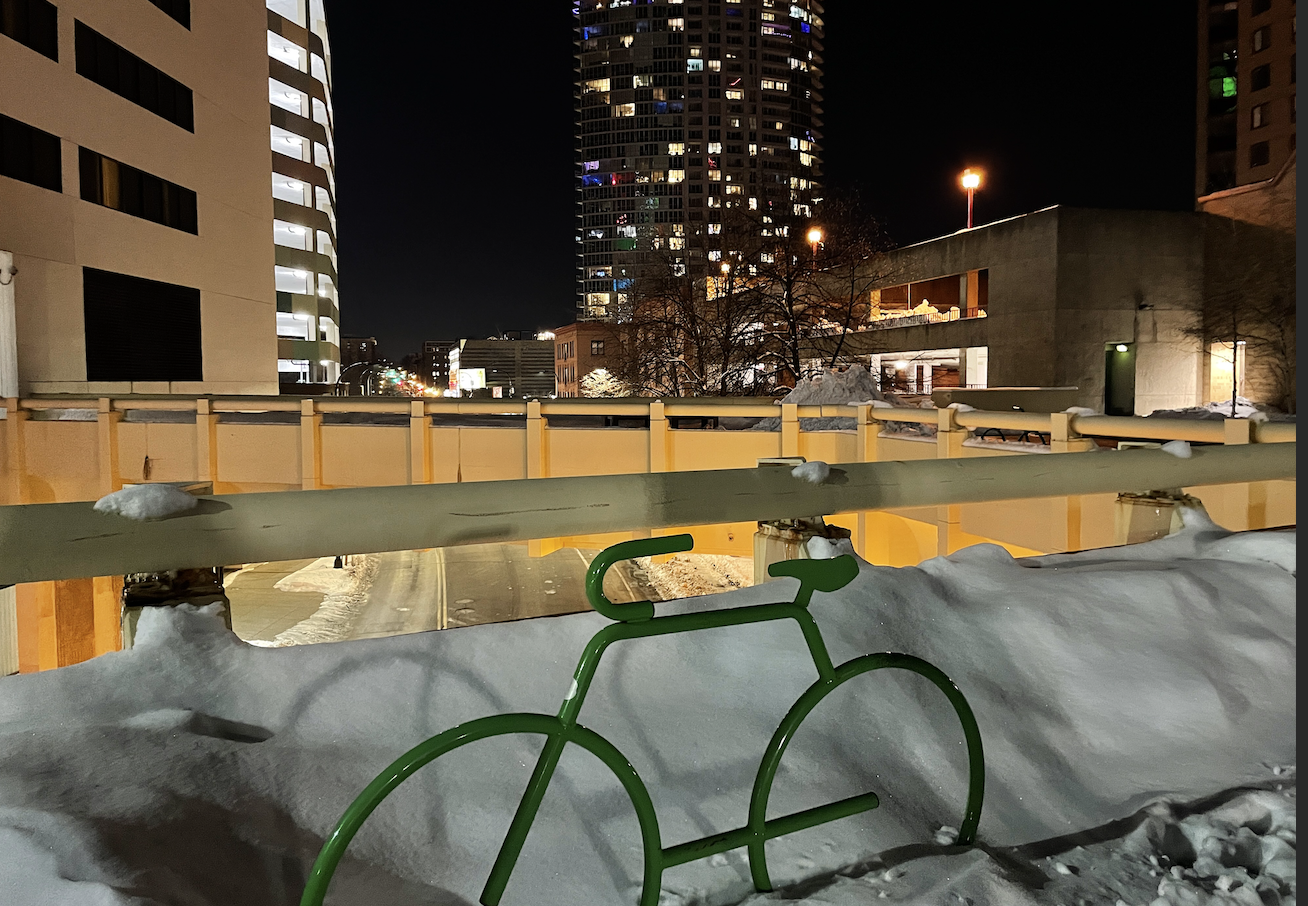 See you next time, winter biking! Photo taken in Cedar-Riverside

Strike update: While it's impossible to really tell from the outside, neither the district nor the union representatives are acting like they're very close to a deal.

Becky Zosia Dernbach reported at Sahan Journal yesterday that the union was optimistic about some progress in negotiations, with a key sticking point being whether certain policy changes would be temporary or permanent. Then, the union released a statement last night, saying, “Today, for the second day in a row, the MPS negotiations team refused to counter MFT. It is impossible to settle a strike when one party refuses to negotiate." Meanwhile, the district said yesterday that "MPS continues to wait for responses from MFT on a number of proposals." In a news conference Sunday night, Melody reported that the district has said they are at their financial limit.

Here's a website maintained by the district where they claim to present the current proposals from both sides, which (if true) shows a gap of around $230 million over the next two years alone between the latest proposals from the district and teachers/ESPs. The district says its last proposal included a higher salary for starting teachers, a $3 million investment of ESSER money (one-time COVID relief funding from Congress) into mental health supports for students and teachers, class size caps for "highest needs schools," and further protections for teachers of color.

We have a guide with resources for parents & caregivers during the strikeavailable on our website that we'll continue to update as long as this lasts.

We interviewed State Rep. Emma Greenman, whose new district will stretch into Tangletown, Windom, and Armatage. She shared a number of thoughts about how the legislature should support the Minneapolis Public Schools and the people that work in them, as well as her work as a voting rights lawyer and how that's guiding some of her priorities this session.

On education funding: "There's this session, and then there's how we got here. Our investments in public education at the state level are not back to where we were in 2001 when you count for inflation."

On voting rights: "We’ve seen an exodus of election judges who are concerned about their safety and concerned about being targeted by the Big Lie, and this new focus on election administrators and election workers. Protecting them from harassment, intimidation, and interference, and making sure that our local election administrators feel safe, supported, and uplifted to do the job when they step out and help this robust machinery of our democracy."

Today is the last day to apply for a grant from People for Parks, which is giving people small grants to plan fun activities in or make improvements to the city's parks this summer. All you have to do is come up with an idea and fill out the application. If you're selected, you get free money. Check it out!

Our neighborhood listening tour comes to Whittier today. Here is the schedule:

Join us! We'll be posting to our Instagram story if you want to keep up with where we are.

Mayor Frey announced that, in the next few weeks, the city will be rolling out a policy to further restrict no-knock warrants like the one that led to Amir Locke's killing by a Minneapolis police officer. Frey's campaign and his allies stated he had already banned them during the last election, which this policy will still not do. (WCCO)

In a piece written and reported by a North High junior, North High students and parents share why they support their striking educators. (North News)

Tonight, Councilmember Robin Wonsley Worlobah is hosting a meeting, where she will update people on what she has learned about public safety and the Minneapolis Police Department during her first two months in City Hall. Make sure to register if you'd like to attend.

The Lyndale, Central, and Bryan Neighborhood Associations, alongside Minneapolis Climate Action,  will be hosting a "Southside Goes Green" event tonight at Tiny Diner.

Hennepin County's Law, Safety and Justice Committee will be meeting today, and will be discussing reauthorizing an interesting program called Sentencing to Service, "a community work service program in which clients may be court ordered as a sentencing sanction or as a condition of pretrial diversion or in lieu of paying traffic fines." Robbinsdale, Brooklyn Park, Brooklyn Center, and Crystal will be paying the County close to $120,000 and receiving park, street, and landscape maintenance, as well as litter and snow removal from these individuals in exchange.

Linea Palmisano will be hosting a conversation about public safety at Mount Olivet on Monday. Register to attend.

Go check out Creativity Academy at Mia, where they have a bunch of great art from kids on display. We certainly will today on our Whittier tour!

The Lagoon Theatre is showing a bunch of the Oscar-nominated short films over the next several days.