The extended school calendar reflects state-requirements and an opportunity to pay teachers and ESPs for lost work time during the strike. 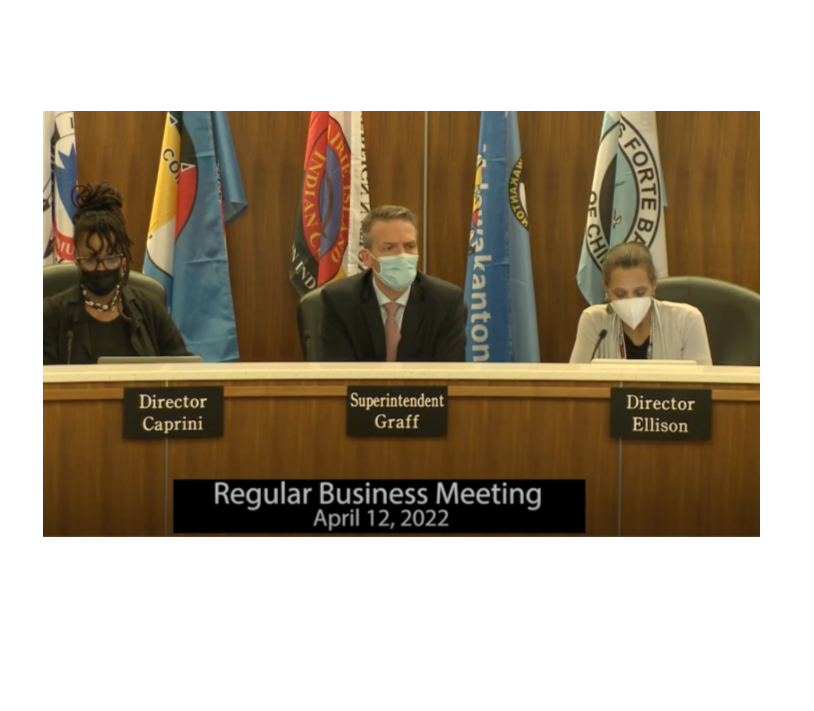 MPS Board of Education Director Kimberly Caprini, Superintendent Ed Graff, and Chair Kim Ellison at the beginning of April 12's school board meeting.

This article has been updated to include a response from MFT 59 President Greta Callahan.

For nearly two hours, the Minneapolis Public Schools Board of Education heard public comments on the evening of April 12. Nearly all comments were about the negative impacts of the 42 minute extension to the school day and 10 additional school days that were added to the district calendar as part of the return to work agreement between the district and the MFT teacher and ESP chapters. The extra minutes and days were added to the school calendar to meet state requirements for instructional time, and to ensure teachers and ESPs would earn all wages and benefits not paid during the strike in March.

In response to these complaints, a group of school board members worked with high school principals and associate superintendent Dr. Harris-Berry to reach an accommodation for high schools that would meet state requirements for instructional hours without the additional 42 minutes. These high schools are Edison, Fair, Henry, Heritage, North, Roosevelt, Stadium View and Wellstone. Principals at these schools have been given flexibility in how to implement the additional time at their schools. The principals were notified April 21 by email about the flexibility. High schools that do not meet the state minimum without the additional time must continue to allocate the additional 42 minutes evenly across each class period. The new guidelines do not address middle schools, or K-8 or K-5 elementary schools.

MPS students, parents and staff shared the negative impact the extended calendar is having on them.

During public comments on April 12, the school board heard primarily from high school students, who noted how  the extended calendar is having a negative impact on them. The impacts include their ability to work after school, participate in after-school activities, and care for younger siblings. North High School student Khadijah Ba highlighted the toll external events, such as  the pandemic and the recent murder of classmate Deshaun Hill Jr., have had on students. Ba also noted that students have come to board members multiple times asking them to address issues at her school, but that the board has not taken action. She also suggested that the board prolonged the strike to intentionally add days to the calendar as a form of punishment.

“You knew that this strike was going to go on for so long if you didn’t give them what they wanted,” Ba said. “You waited three weeks so you can say ‘you know since it’s such a consequence we’re going to put it at the end and we’re going to punish them.’”

North High School student Ayana Molander said the district had a “blatant disregard to differentiate.” Molander claimed that two South Minneapolis middle schools are being allowed to implement the extra time as advisory and passing time, not as minutes added to each class period. (We are waiting on a response to this claim from MPS).

Rather than creating safe and happy school environments, Molander said the extended calendar has created “exhausted and depressed students, stressed and worn out teachers, and torn up and frustrated administration.”

Several commenters pointed to the use of the word “consequences” used by Board Director Kimberly Caprini in the March 29 school board meeting when the changes to the calendar were approved. The commenters interpreted the word to mean punishment, although during the meeting Caprini said she did not mean it in that way. In an interview after the April 12 meeting, Caprini said, “I made a mistake in the word that I used. It was never to punish anyone. I should have used the word impact and I didn’t and I own that.”

The return to work agreement was negotiated quickly, by teams from MPS and MFT.

School Board Chair Ellison said the return to work agreement was negotiated at 3 p.m., on March 25,12 hours after negotiators had reached a tentative agreement on the contracts for teachers and ESPs. Negotiators had been awake for nearly 48 hours when the tentative agreement was reached at 3 a.m. They returned  at 3 p.m. to negotiate the return to work agreement. Ellison said negotiators felt a sense of urgency because staff had been out of work for so long and were not being paid.

According to Ellison, there were two priorities for the return to work agreement. One, a desire to make employees financially whole, especially ESPs who are paid hourly; and two, to have an agreement that met state law on hours and days of instruction. While the additional ten days helped satisfy both of these priorities, additional minutes were also needed to meet the requirement for instructional hours. District officials said that they modeled a number of different scenarios, and the 42 minutes plus 10 days was agreed to by MPS and MFT because it had the least negative impact on families and staff. Representatives for parents and students were not involved in the negotiations.

In response, district officials over email said, “As with every decision made by MPS, the impact on students and families was our top priority in considering the different scenarios.”

Southwest Voices had reached out to MFT before publication about the extra minutes and days of instruction, but they did not respond until after publication. In an email after publication, MFT teacher chapter president Greta Callahan said that MFT had submitted a draft of a memorandum of agreement to MPS Human Resources that would modify the return to work agreement. MPS indicated they will not negotiate a modification given the flexibility now in place for high schools with pre-existing extended school days, per Callahan.

The additional 42 minutes were necessary for teachers and ESPs to earn wages and benefits that were not paid while on strike.

The email response from district officials conveyed that 42 minutes were added to the school days, instead of the 37 needed to meet state minimum instructional time, in order to make sure ESPs and teachers earned the full pay they had not earned while on strike. The 42 minutes can be rounded up to a full hour for the purposes of pay and benefits eligibility for ESPs. The extended days also make teachers whole because they are paid extended time for the additional school day. Typically, teachers are paid by the day, not hours worked, so adding ten additional days without the extended time would have left teachers without some of the wages they were not paid while on strike.

The return to work agreement specifies the 42 minutes be divided evenly across class periods, but families report schools are implementing the additional time in different ways.

Although the return to work agreement specifies that the 42 minutes be split evenly across class periods, on April 13, Ellison said she was not aware of any directive that was sent to principals to guide them on how to implement the additional time. District officials later said that principals were given information about the extended days and extended school year, and required to submit a change to their master schedule for approval by their associate superintendent.

When asked about the differences between schools, Ellison said that she has asked for a list of how each school is implementing the 42 minutes, but as of April 13, did not believe such a list existed. Board Director Adriana Cerillo, in an interview with Southwest Voices, said she has also asked for a list. Cerillo said that it is the responsibility of the associate superintendents to communicate to principals how the time should be utilized and report back to the superintendent about how schools are actually implementing the extra time each day. In a follow up interview on April 24, Ellison said that she still does not have a list of how the extended time is being implemented in different schools.

Because of the different schedules, some high schools need to make up more time than others to meet state requirements.

Before the extended school year calendar went into effect , MPS had 170 days of instruction scheduled for first-12th grade students, which is five days over the state minimum of 165 days. The state requires 1,020 hours of instruction for seventh-12th graders. Under the previous calendar, middle and high schools without extended time barely met the minimum hours with a six-hour school day.

High schools that already had extended days will be allowed to implement the additional 42 minutes with flexibility to meet the specific needs of their school community. Plans should have been communicated to families on Friday, April 22, and changes will start on Monday, April 25. In order to leave campus early, students under 17 will need permission from a parent.

Because of the way MPS high schools are funded, Patrick Henry and North High Schools have funding for a seven-period schedule. Because of that extra period, these two high schools have an additional 35 minutes and 30 minutes, respectively, added to their schedules, which equates to roughly 85 additional hours of instruction time.

From April 11 to June 24, there are 53 school days; Memorial Day and Juneteeth are holidays for MPS. To meet the 1020 hours of instruction, students in middle and high schools without extended days needed 30 hours, or 1800 minutes, of additional instruction, which is 36.7 minutes per day for 49 days. The return to work agreement specified 42 minutes added to each day (34.3 hours over 49 days) at every school, slightly more than what was needed for 7-12 graders without extended day schedules to meet the state minimum instructional hours.