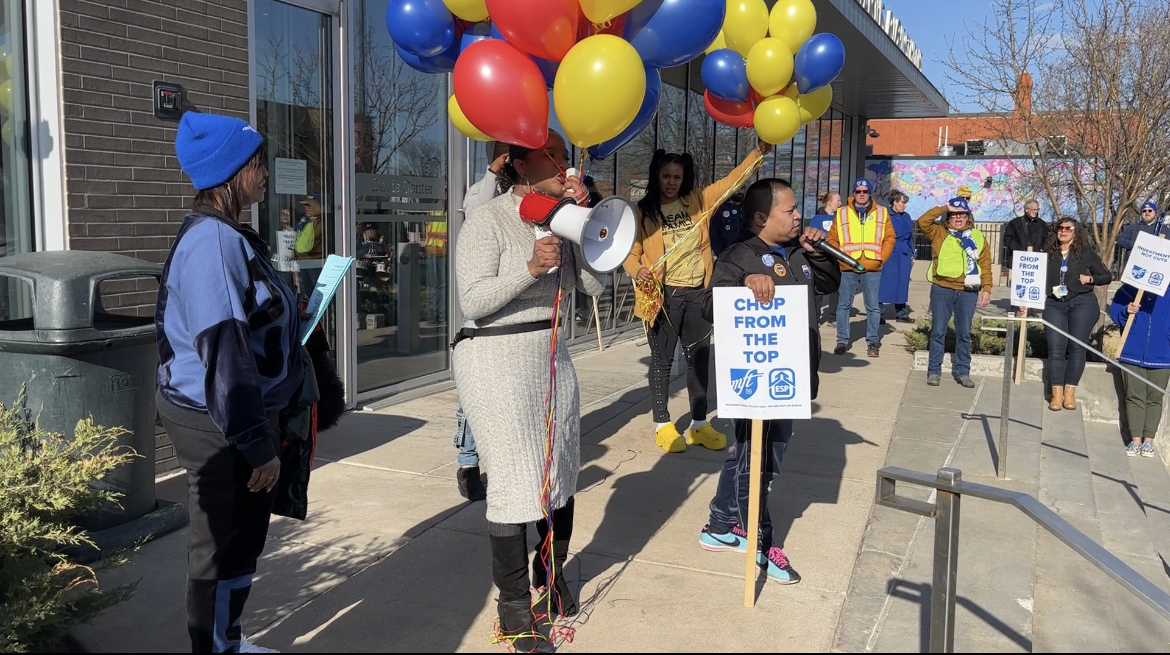 Alexis Mann, a teacher at Harrison, interrupts the MFT 59 protest with a megaphone and brightly colored balloons. The protest was held outside the John B. Davis Center on April 26.

Yours truly, Melody, will be part of the "Rebuilding Local Journalism" talk, organized by the Lowry Hill East Neighborhood Association, tonight from 7-8 p.m. on Zoom. Register for the talk here or be a rebel and just hop on the Zoom call at 7 p.m.

The MPS Board of Education's Committee of the Whole met last night. Melissa Whitler live tweeted the meeting and will have an article up about the meeting this week.  The preceding Policy Committee meeting, approved sending updated policies on wellness and bus safety to the full board.

The educators union, MFT 59, protested outside the John B. Davis Center last night. The union argued that the pending budget cuts, slated to cover the costs of the recent union contract with the district, teachers, and education support professionals, can we avoided.  Melissa has details on the financial outlook of MPS here.

The union argues that "chopping from the top," or decreasing spending at the administration level, and tapping the district's reserve fund could cover the costs of the new union contract.  Over their shouts of “chop from the top," Alexis Mann, a Black educator at Harrison, arrived with a bullhorn and countered the chants with her own that "77 percent of MPS students can’t read." Over the noise of the crowd and a live band, Mann told me, "I want the union to prioritize achievement." Mann is running for MFT teacher chapter president against incumbent Greta Callahan.

If you use the Midtown Greenway, you may have noticed that a recent repaving wasn't the best look. Last fall Minneapolis Public Works put down a new trail surface. Instead of a "full overlay" with a thicker surface, they opted for a less-expensive "micro-surfacing" process. The "micro-surfacing" didn't work. The resulting surface was full of pebbles and had dangerous gaps and missed areas. If you have ever rode a bike around light rail tracks, you know the dangers of bike tire-sized gaps in the road. The Midtown Greenway Coalitionsaid the re-paving will happen sometime this summer, fingers crossed.

A bigger version of Boludo in Kingfield opened yesterday (Racket).

Wedge LIVE! has a new podcast episode out titled "How to Make Friends in Minneapolis, Stop Being Lonely, and Be Happy Forever" (Wedge LIVE!).

Yesterday during the Committee of the Whole meeting, Mayor Jacob Frey urged City Council members to move quickly to help set up the city's new form of government (Star Tribune).

In Game 5 of the NBA playoffs last night, the Timberwolves barely lost to the Grizzlies. The Wolves are down 2-3 in the 7-game series. The teams face off again on Friday (Star Tribune).

If you live in East Harriet (like me, hello!), the neighborhood association will give you 10 biodegradable bags and a garbage claw for picking up litter as you walk around the neighborhood. Email cleanwalkprogram@gmail.com to get your supplies.

Speaking of the East Harriet Farmstead Neighborhood Association, they are accepting applications for a new board member. Email info@eastharriet.org with a note about why you'd like to on the board.

The full Met Council is meeting at 4 p.m. today.

The Minneapolis Park and Recreation Board Committee of the Whole meets at 5 p.m.

The Granada Theater is holding a Ukraine fundraiser tonight featuring the Drums of Navarone, Batucada do Norte, and the Good, the Bad, and the Funky.

Today at noon, the American Swedish Institute is doing a virtual tour of the famous homestead of renowned artist couple Carl & Karin Larsson. Carl Larsson-gården in Falun, Sweden is a popular tourist destinations, Larsson is an icon in Swedish home decoration and family life.

Enjoy music by Reynaldo Moreno while you drink wine and eat olives at Troubadour Win Bar on Hennepin Avenue South.