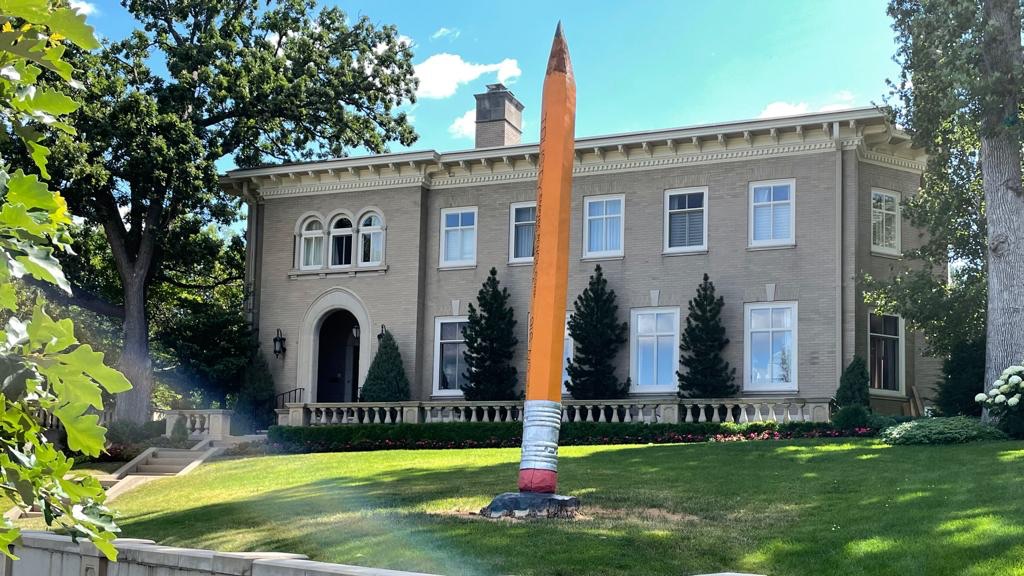 The LOTI Pencil looking majestic on a summer afternoon

After a two-year hiatus, the Uptown Art Fair is back. This weekend, join the events at Hennepin & Lake starting at noon on Friday. The event will run during the day through Sunday.

Its return is a big moment for Uptown, as it generally brings out thousands of people to shop for art, visit local businesses, and enjoy walking around the closed-off streets. Losing the festival for the last two years was a tough blow, but having it back will be a big moment for the whole area. Get out, meet some people, and check out some art this weekend.

Melody visited the new skate park at Bde Maka Ska to figure out how it came together and how it's working out so far. The story starts last summer, when a group of skaters took the unused land where the lake's pavilion is currently being rebuilt and turned it into a vibrant skating space.

Now, they have a sanctioned park filled with DIY ramps and rails. It's a great story about community organizing and dedicated people activating public space.

There will be a public hearing today for the mayor's nomination of Cedric Alexander to be the commissioner of community safety. Te hearing will be held at the Committee of the Whole meeting. There will also be a discussion about the "strong mayor" government structure, too.

The position that Alexander has been nominated for would represent a major shift in the city's government structure, moving us towards having a larger department focused on safety that includes policing rather than a department for policing alone.  Here's a bit more on his background from the Star Tribune and the Minnesota Reformer.

Focused policing, like targeting resources to very specific locations, was one of the things we highlighted in our public safety solutions piece. The Park Police have utilized focused policing in a few parks, including Loring Park and Stevens Square Park, which have both seen a large decrease in crime compared to last year. (Star Tribune)

Starting tomorrow, J. Morten's butcher shop at 50th and France will be offering next-day delivery to everyone in the area. (J. Morten's)

The print edition of Dispatch this month is all about skateboarding! (Dispatch)

If you have rusty water right now, it might be as a result of all of the road construction and/or the flushing of your hydrants. (NextDoor)

Meet Pamela, a volunteer with the Art Shanty Projects, who has some thoughts on why you should join her team. (Instagram)

Here's a list of the new laws that went into effect in Minnesota on August 1. (KARE 11)

Tonight is National Night Out. There will be events all across the city for you to gather with and get to know your neighbors, from events organized on a handful of blocks across the city to this one in Mueller Park at 6 p.m. There will likely be a few street closures around the city as neighbors gather together, so heads up for that. National Night Out was created as an event to get to know your neighbors and improve police - community relations.

There's a special meeting happening tonight featuring the Minneapolis School Board and Park Board. They'll be meeting to discuss their partnerships, and will feature statements from both of their superintendents.

Check in with your neighborhood organization or block leader for information about National Night Out events in your area.

Lakewood Cemetery is hosting a Death Cafe today to allow members of the community a space to talk about death.

Tonight at 6:30, check out IRIE SOL in Bryant Square Park.