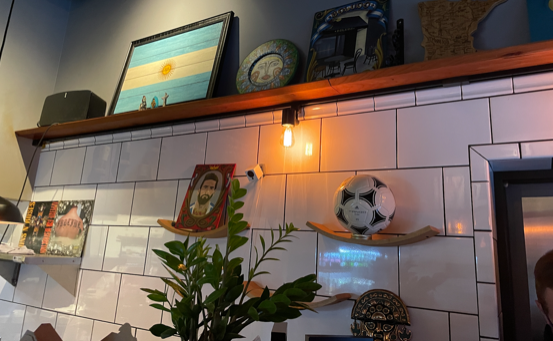 Do you know where this shrine featuring a goat is located? First person to share your answer on social media and tag @SWVoicesMPLS wins.

Here is our Wednesday newsletter, delivered to inboxes all over Minneapolis. Sign up for our newsletter at the bottom our homepage.

The Minneapolis hockey team opens their state tournament run tonight at 8 p.m. against Alexandria at the Xcel Energy Center.

We published a piece about them this morning. Here's a preview: "Minneapolis high school hockey teams aren’t supposed to go to the state tournament. So, when the combined Minneapolis team won the section final last week, we did what any nosy adults would do when a group of kids breaks the rules – we called their parents."

Josh Martin wrote a great piece for us about the Charter Commission openings. He broke down how the Commission works, the current vacancies, and how to apply.

Do you know someone that you think should be on the Charter Commission? Enter their name and email in the "Add Context" box at the bottom of the piece and we'll send it to them with a note that someone wants them to apply.

As the first in our series of Minnesota legislator interviews, we asked Rep. Jamie Long a few questions about this session at the Capitol. Here are a couple quotes from him:

Sahan Journal published a really great comprehensive guide with updates on the Minneapolis teachers' strike negotiations yesterday. The biggest news in it is that the teachers have considerably lowered their wage demands, from a 20% increase to 12% (according to the district). “'I can’t stress enough that all we want is competitive pay,' said Greta Callahan, teacher chapter president of the Minneapolis Federation of Teachers and Education Support Professionals."

Superintendent Ed Graff said the district (which has a $650M annual budget) and teachers are still $100M apart. The teachers are also holding firm on raising ESP pay to $35,000 per year at the lowest end, and are planning a rally at the State Capitol at 1 p.m. They'll be on the picket lines outside their schools early this morning. (Sahan Journal)

The city's after-action report that was released yesterday showed a variety of issues about the city's response to the unrest following George Floyd's murder. There were major errors in communications, from the city not updating the general public quickly enough to officers not getting consistent direction on what they could and couldn't do, as well as operations, from the fire department not calling for mutual aid from surrounding jurisdictions to an unclear line of command on who was handling routing calls to the city. The report's authors recommended that the city government needs to spend more time speaking with and listening to the community to rebuild trust. (MN Reformer)

A fire damaged Church of the Incarnation at 38th & Pleasant overnight. We'll keep you posted on resources to help the church community if we see them. (Star Tribune)

A Black educator at Patrick Henry shares her perspective on the district and MFT 59, neither of which she's particularly complimentary of. (MinnPost)

Forward this email and share our resources guide with a Minneapolis public school parent or caregiver that you know.

You can still sign up for Park Board adult sports programs.

Kiss The Tiger opens up a March weekly residency tonight at Icehouse.

Something Happened in Our Town is playing at the Children's Theatre for kids ages 7 and up. Here's a preview: "When a Black man is killed by a police officer, Emma and Josh have questions—lots of questions about what happened, and why. Josh is afraid for his brother Malcolm who has gone out to protest and Emma is concerned about her Uncle Manny, who is a police officer."

Go check out Troika improv tonight at Huge Theater, "a bracketed improv tournament featuring performers drawn at random split into trios of improvisors who have never performed together before."