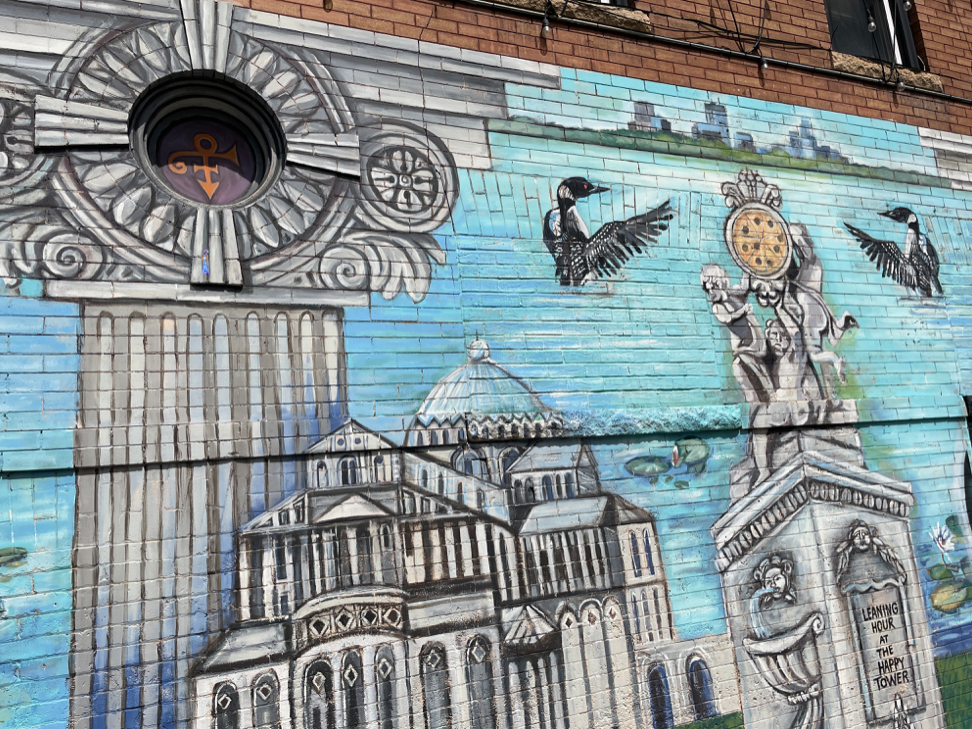 The mural at Leaning Tower of Pizza on 24th Street and Lyndale Ave.

We've covered the depth of this issue in Stevens Square - Loring Heights a few months back, and Melody has a piece about the current state of the problem, which includes 49 broken lights in one of the city's smallest neighborhoods at the time of the announcement. The lighting issues have dragged on for years, and here's to hoping this new round of investment finally re-lights their streets.

The City Council, Mayor Jacob Frey, and Commissioner of Public Safety Cedric Alexander hosted a discussion about the structure of the new Office of Community Safety yesterday. Billed a "casual" conversation by Councilmember Linea Palmisano, it was intended to be a time for members of the council to discuss their thoughts about the new city department that Alexander will be running. The full video can be found here.

There were several interesting exchanges, including a few on the design and future of the Office of Violence Prevention and violence interrupters programs with Brian Smith, the director of the Office of Performance and Innovation and how soon that work should be integrated into the larger department with Councilmember Jeremiah Ellison. There was an additional discussion about how overtime contracts and the buyback program could serve as "competition" for officer hours that are more needed elsewhere with Councilmember Elliott Payne and Interim Police Chief Amelia Huffman that can be seen here.

The next steps for setting up the Office of Community Safety will be an ordinance around its structure that's scheduled to be released on September 20, a public hearing October 4, and a final vote by the council as soon as October 6.

One of Southwest Minneapolis' great sports rivalries kicks back up tonight when the Washburn and Southwest girls soccer teams play at 5 p.m. and the boys soccer teams face off at 7 p.m. The two boys teams last met during last year's Section Final, where Southwest beat Washburn with a goal in the final moments of the game to go to the state tournament.

Tonight's matchups are for the Sylvester Cup, which honors John Sylvester, a famous Minneapolis soccer coach, and Hallie Brown, one of his former players.

The city's police chief search committee announced its three finalists, all from out of state: Elvin Barren, the chief of police in Southfield, Michigan; Brian O’Hara, a public safety official in Newark; and RaShall Brackney, the former chief of the Charlottesville Police Department. Barren's experience includes decades in several departments of Detroit's police department and he shared some interesting comments on police reform a year after George Floyd's death, O'Hara's experience in Newark has included implementation of the city's consent decree and community engagement before being recently reassigned from public safety director to deputy mayor, and Brackney was recently the subject of a lengthy piece in the Washington Post about her time in Charlottesville. (KSTP, WXYZ, NJ.com, The Washington Post)

Three Minneapolis Public Schools parents talk about the importance of retaining and increasing the number of teachers of color in the city's schools. (Minn Post)

Federal prosecutors are charging a Minneapolis man with 3D printing ghost guns and "switches" to turn firearms into fully automatic weapons after tracking a package of materials he ordered from Taiwan. He had had at least one prior package of switches intercepted from Russia in October 2021. (Star Tribune)

Tickets for the Tangletown Gardens Farm Supper 2023, hosted at the farm where most of Wise Acre's food comes from, are now on sale. The event isn't until next August, but it will sell out, so get on it if you want to go. (Tangletown Gardens)

Attention Martina-lovers – you can now sign up to get a special Argentinian-Italian meal from the Martina team delivered to your home each month. (Instagram)

The Star Tribune filed a FOIA lawsuit against the U.S. Department of Defense for improperly withholding records related to the George Floyd uprising. (Becky Zosia Dernbach)

The Linden Hills Council announced plans for getting new playground equipment for the Linden Hills Park's playground. Potential designs and donation links are here. The funds raised for this effort will be split 50/50 with Hall Park, another neighborhood playground identified by the Park Board as needing additional resources.

The Bde Maka Ska boat launch, closed since June 6, will reopen beginning Saturday, September 24 through Monday, October 10. Southbound East Bde Maka Ska Parkway, which has been closed to vehicle traffic from Lake Street to 36th Street since August 1, will reopen during this time as well.

Icehouse is hosting a fascinating book event with the Hennepin History Museum and Minnesota Historical Society Press tonight which I will quote from at length: "But from the 1880s until at least 1912, Minnehaha Falls was a scene of surprising mayhem. The waterfall was privately owned from the 1850s through 1889, and entrepreneurs made money from hotels and concessions. Even after the area became a city park, shady operators set up at its borders and corrupt police ran 'security.' Drinking, carousing, sideshows, dances that attracted unescorted women, and general rowdiness reigned—to the dismay of the neighbors. By 1900, social reformers began to redeem Minnehaha Park. During the struggle for control, the self-indulgent goings-on there became more public and harder to ignore."

Wrecktangle Pizza is putting on a Bob's Burgers-themed menu and trivia night.

Unleashed Hops & Hounds is hosting a fundraiser for My Pit Bull is Familytonight.

Luke Leblanc will be playing Folk/Americana tonight at the Bryant Lake Bowl Theater, while a DJ will be spinning R&B, funk, soul, and hip hop in the bar/restaurant/bowling area.

Dirty Bottles & Friends will be at Driftwood Char Bar.

Aesha Minor will be playing with Services and Lydia Liza tonight at Mort's.