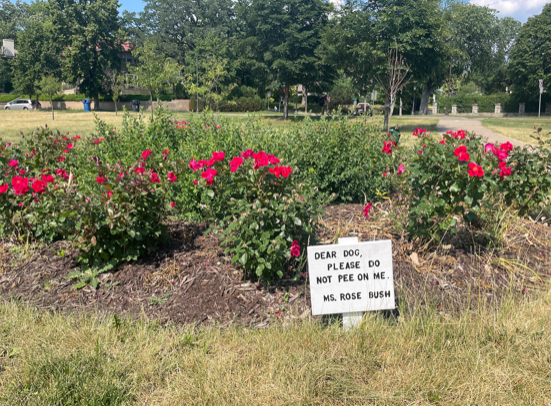 We've got our eyes on you, dogs. No peeing on the rose bushes around Lake of the Isles.

Our membership/donation drive ends in 3 days. Consider signing up!

You can get a sweet screenprinted map of Southwest Minneapolis if you sign up at the "Booster" level before the month is over?

If you've been near the Museum of Russian Art lately, you've probably seen their giant Ukrainian flag and blue-and-yellow landscaping. They wrote a piece about why the museum wanted to express solidarity with the Ukrainian people right now and a specific exhibit you don't want to miss.

Melody collected responses from the three Southwest councilmembers who voted against the Hennepin Avenue South redesign plan to learn more about their votes. You can read them all here.

Did you know that wage theft from workers costs Minnesota taxpayers $136 million a year? That's a pretty massive number, and it exists because some employers withhold paying their employees the fair, living wage that they are owed. As a volunteer with Centro De Trabajadores Unidos En La Lucha (CTUL) writes for us, much of this is focused in the construction industry. Minneapolis is responsible for about 40% of the state's construction, and while the city has made progress to help crack down, there's more it could do to help.

🇸🇴 Happy Somali Week. Here's a few things you should know about their independence day (July 1) and lots of things going on around the city to celebrate.  (Sahan Journal)

If you have a sour cherry tree and don't want to pick it, this guy will come to your house, pick it for you, and deliver you two jars of sour cherry jam.  ̶S̶w̶e̶e̶t̶ tart deal. (NextDoor)

A Pride report from the Uptown VFW. (WCCO)

Racket did a beautiful celebration of the new Little Tijuana. (Racket)

Small creative businesses and arts and cultural nonprofit organizations can apply for Business Support Funds for Creatives from the city. Grants range from $5,000 to $18,000.

This is cool! Councilmember Emily Koski's office made a Ward 11 construction map lists projects from the Minnesota Department of Transportation, CenterPoint, Metropolitan Council, Hennepin County, and the City of Minneapolis.

The City Council's Committee of the Whole meets today at 1:30 p.m. On the agenda is a discussion of staff additions needed as the city government continues its reorganization plan following the passage of the "strong mayor" amendment last year. The city is proposing to add a Chief Operations Officer and a Community Safety Commissioner, both of which would make around $300k per year.

Washburn High School needs a new Head Secretary. Is it you?

Here's where the Minneapolis Public Schools Street Eats food truck will be giving away free food to kids 18 and under this week.

‍The Bell Museum is hosting an event on Facebook Live from 12:00 - 12:30 p.m. to help you track Minnesota's night skies in July.

Ameet will be playing Indo-western pop sounds of delight tonight at Bryant Square Park at 6:30 p.m.

*DON'T READ THIS IF YOU HATE SKEE-BALL* Now that they're gone, you should know there's a skee-ball tournament happening tonight at Up-Down Arcade.

Tuesdays at Fire & Nice are now "Draw and Drink" nights. Bring in your art supplies and make art amongst others.